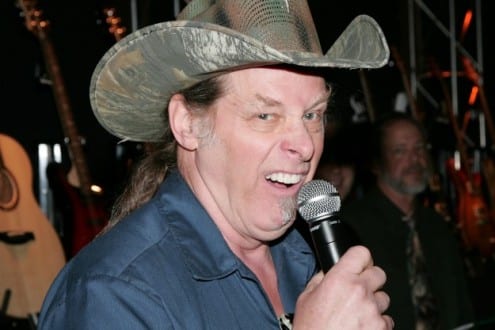 Everyone’s favourite Bad Grandpa Ted Nugent is never one to shy from a political debate and has declared Hillary Clinton a “lying scam artist.” He spoke with Eddie Trunk on the SiriusXM satellite radio show recently and also gave his opinion on Donald Trump.

“I like Donald Trump a lot. He’s not perfect, but compared to this lying scam artist… I’ve gotta tell you, that’s not Ted Nugent‘s opinion. This Hillary Clinton, she is a criminal. She is a liar. She is so corrupt. She is not just corrupt in abusing power to a criminal level, she is destroying America with her so-called ‘foundation’ slush fund and all the evidence that the media will not report accurately. Donald Trump‘s not perfect, but compared to her, he’s almost Michael The Archangel. And this is a culture war. It’s a culture war, not a culture argument.”

Nugent continues: “I believe that the record turnout for Donald Trump is an inescapable indicator that real, working-hard-playing-hard Americans, people who are in the asset column — not those who have given up looking for work, not those who have a list of jobs they’re not willing to do, which isn’t American, by the way; that’s French. The real producers of this country are coming out for Donald Trump because they know that what the Democrats represent today is clearly anti-American, it’s anti-excellence, it’s anti-independence, it’s anti-rugged individualism. The Democrats literally think you should be able to sleep in and get some of Eddie Trunk‘s earnings, and it’s tragic. And that’s not America.”

Nugent went on to say: “The battlecry for America, to be strong, should be ‘earn your own way.’ And when you earn your own way, you make America strong, you benefit your family and your neighbors, and you can hold your head proudly. Because earning your own way is the essence of the Declaration Of Independence, not the declaration of dependency.

“When it comes to generosity, those of us that work hard give and give and give. I know you give, I give, everybody I know gives to needy Americans and to charities. But those who don’t earn their own way don’t give anything.”

In 2014, Nugent was made to apologise for referring to President Obama as a “subhuman mongrel.” He was also investigated by the Secret Service two years prior after saying that he would be “…dead or in jail by this time next year,” if President Obama was re-elected. Unfortunately, neither of those things happened…