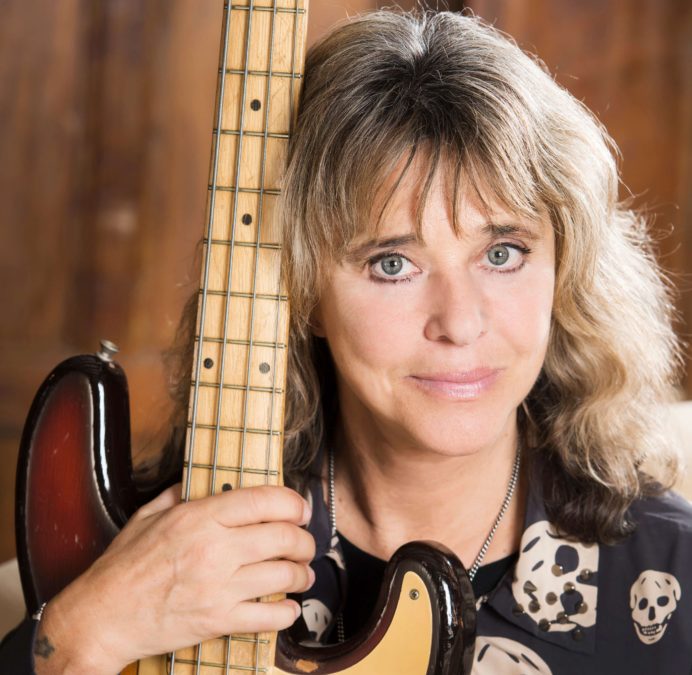 This episode of Hash It Out with HEAVY is a hard hitter.

In this revealing interview, none other than Suzi Quatro, the ultimate rocker, gives HEAVY’s Olivia Reppas the lowdown on her new album, The Devil In Me which will be released on March 26.

Renowned for timeless rock classics such as “Can The Can” and “Devil Gate Drive”, Quatro has been consistently blazing the fire of rock’n’roll through the decades since her debut self-titled album in 1973, her most recent release No Control landing in 2019. Suzi Quatro is a formidable force of wild and rugged rock music, and with The Devil In Me, still owning it. Life, music, everything …Suzi’s rocking it.

“You’ve got it in one,” Quatro smiles, ‘That’s exactly what I’m doing. I’m owning my life.”

Watch as Quatro and Reppas dig deep about the making of The Devil In Me, and what it was like for Quatro to work with her son, Richard Leonard Tuckey. “My son has brought his thirty-six-year-old energy to it, and his vision of what I am, that’s watched since he was a little boy. And I’ve brought my life to it. What a great album we’ve made, and I trust him completely. I’m seeing me through his eyes now, which is quite exciting.”

“We do get along very well, always have done. He’s fired me up, he’s lit a fire that I didn’t think needed to be relit,” Quatro laughs, reflecting with Reppas on making the album with her son, “I was surprised that I had a fire to light, I’m always just here anyway. Seeing his enthusiasm…I gave birth to him, now he’s giving rebirth to me.”

After five fierce decades slaying it in the music business, Quatro has laid out one of her most heartfelt and diverse albums to date. As Quatro says, “I put my heart on the line for this album”. Check out the Hash It Out with HEAVY link below as Quatro talks through ‘those dark feelings’, her intense new music video, the power of fans’ stories, the reality that we are living in during the pandemic, and a message of resilience for today’s emerging musicians.

And what a time for a killer rock album. We cope with isolation, we face setbacks and fears we never knew were possible, and we turn to music to get us through. As 2021 grinds on, who better than the mighty Suzi Quatro to unleash an album packed with all the energy, power, and good old-fashioned fun of a life lived in music. “If what I’ve said and done touches you, then …cycle complete,” Quatro says.

Watch the full interview below:

Watch “The Devil In Me” below: