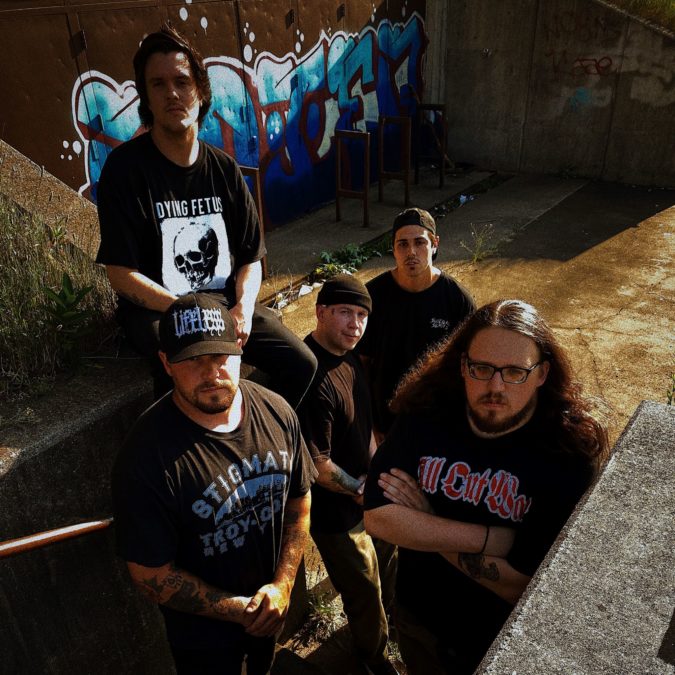 Midwest hardcore outfit Purgatory are set to launch their sophomore album Lawless To Grave on April 9 through Unbeaten Records.

The album is a culmination of more than 12 months writing and preparation and the result is truly breathtaking.

Purgatory have delivered an album full of angst, hate and punishment that has been rightfully labelled their most confrontational release yet.

Vocalist Matt Anderson sat down with HEAVY to discuss the album and it’s bleak landscape.

After an initial exchange where Anderson downplayed the ferocity of Purgatory’s efforts, HEAVY urges him to be more open and honest in his appraisal, something which we feel is more justified.

“Yeah,” he laughed, “I’m a little humble when I talk about things but there’s absolutely no denying that this record is just pure, raw aggression. We really captured something on this record that’s… it’s hard, it’s heavy, it’s pissed off, it’s very real. There’s no other way to describe it aside from everything that’s in that realm. It’s chaos. Controlled chaos. It’s bonecrushing shit.”

Debut album Cold Side Of Reality – while still a fantastic initiation to the heavy music world – is a release that Anderson says perhaps doesn’t truly replicate the music and stance taken by Purgatory. While not admonishing the album by any means, he admits that bettering that in every way was a driving force behind Lawless To Grave.

“When we put out Cold Side Of Reality – which came out a couple of years ago now – we loved that record but we didn’t give ourselves enough time to write and really put out a product that was a true representation of who we are,” he measured. “I mean, in hindsight we essentially wrote that whole record in a weekend and the goal for this record was to give ourselves time and make sure that we were writing exactly what we wanted to write and that there was no-frills and nothing to be held back. We can sit and listen to every single song and every part of every song on Lawless To Grave and know that it is exactly what we want. So that was probably our biggest goal just to make sure that we had patience and put out a product that we were totally happy with and we would feel that absolutely represented who we are as people and as a band. I think that we accomplished that. There’s no question. I definitely think that we accomplished that with this record.”

In the full interview, Matt talks more about the musical components of Lawless To Grave, how it is the bands most confrontational, the singles released and if they represent the album as a whole, the opening monologue and where it comes from, celebrating the band’s tenth birthday and how Purgatory has grown and changed in that time, the current line up and why it is the best, plans for 2021 and beyond and more.

Watch “No One Gets Out Alive” below:

PrevPrevious.ARTERIES To Premiere “Under The Influence”
Next.HAILMARY Return With New MusicNext