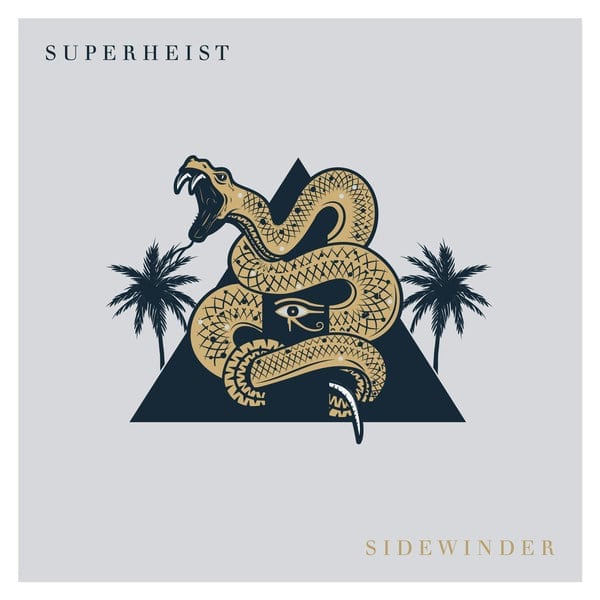 When Superheist reformed and released Ghosts Of The Social Dead the air was thick with anticipation as to whether such an influential band from the late ’90s, early 2000s could make as much impact and return  to the world of heavy music in this country.

Ghost Of The Social Dead proved that not only could DW Norton (founder and guitarist) and his new prize recruits in Ox, Keir, Si and John deliver Armageddon once again, but resume their position as one of this country’s most important and hard hitting heavy bands. Sold out shows to numerous die-hard fans across our great country for the past few years has not only rejuvenated, reinvigorated and reinvented Superheist but now with their new album Sidewinder about to hit stores, it definitely proves that the ‘heist is BACK with a vengeance.

Where GOTSD was stamped with Superheist’s seal of old school classic phrase “Go Hard or Go Home”, Sidewinder most definitely sticks to the get the crowd in the room moving ethos, it has some incredible moments of attention-grabbing ear candy that even surprised me–a massive fan of theirs since the bands’ inception.

Sidewinder isn’t just a Superheist album, it is a mature step forward for a band who aren’t afraid to take chances in a bid to reinvent themselves, but DW, Ox, Keir, Si and John have written and produced an album that cohesively binds all five members together as one symbiotic unit, drawing musical influences both obvious and some not so obvious genres.

For Sidewinder’s two openers “The Riot” and “Crush The Crisis” we are greeted with traditional classic and familiar Superheist material. Cut from the same cloth as what we heard previously on GOTSD, the purpose of the introduction to the album is purely to get your attention and get you moving with a purpose. Heavy groove laden signature ‘heist. DW has constructed and engineered two songs that not only revisits his past but brings his A game to the fore and importantly brings out a dynamic force in his brothers representing his dream.

The production on “Crush The Crisis” needs a special mention. Specifically the way the guitar effects have been manipulated to perfectly complemented Ezekiel’s vocal delivery. Sonically the entire song has a massive stadium feel and should be their second Sidewinder single release.

“Overlord” continues onward and upward further utilizing and showcasing Ox’s amazing lyrical and vocal delivery and diversity. Overall “Overlord” is a slower groove-laden track that has a binding and unifying anthemic feel and is a perfect prelude to introduce my favourite song from the album, “Shockwaves”. Here for the first time outside of her solo project, London, we are greeted with the simply stunning voice and vocals of DW’s wife London Norton trading off with Ezekiel. “Overlord” is calming in its subtle delivery.

“Shockwaves” does exactly as its title describes; shocks the listener by containing an old school techno beat accompanied and complemented by some heavy as fuck guitars driving the song along at a fast chaotic pace then bringing it back down to where the vocals see Ox at his signature angriest.

“Breathe” sees us halfway into to the album and brings an unexpected, sharp, left-hand turn. Leading in with keyboards and a slow hip hop beat, we hear the subtle underlying influence of freestyle rap both hypnotically and calmly cascading us down a path before unleashing a monstrous fucking chorus that only Superheist a capable of delivering! Their chance to let the listener do as the title suggests and breathe with confidence and let all that restrict and hold us back go.

To get a grasp on the rest of the album you’re just going to have to get it for yourselves and discover how an important Australian heavy band can thrust their token nu-metal moniker from the early 2000s to an unapologetic yet unifying force in 2019. They have written, recorded and produced a truly significant album that redefines the Superheist we thought we knew.