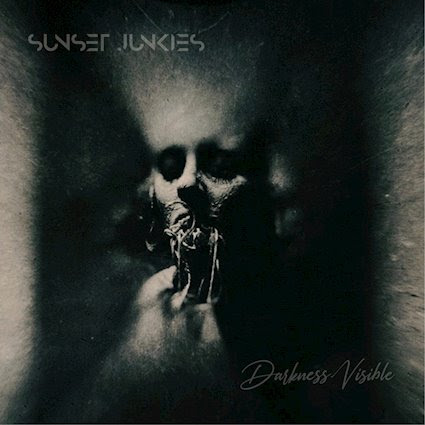 Metal can be accused of many things – just ask Judas Priest – but mixed messages isn’t normally one of them.

It almost always does what it says on the tin. Ed Repka design? You know it’s gonna be a thrasher. Illegible band title font? Some seriously heavy death/black carnage awaits. And of course, any album cover adorned by a face with closed eyes means that you are in for three prog songs spanning approximately seventy-two minutes.

So when I received Queensland’s Sunset Junkies latest album Darkness Visible and scanned the cover, a black and white photo that wouldn’t be outta place in Ed Gein’s family photo album, I was certain something very heavy indeed lay in wait. But hang on, what’s this? I can actually read the band name! Hmm…

Eager to investigate, I checked out the first two singles from the album to see what I might be in for.

Pentagram, released six months ago, reveals itself by way of an impressive Tool-esque opening riff and wallpaper wilting scream. The verse starts off with vocalist Ellie Jane’s voice not just complimenting the song’s brooding mood, but adding to it. An impressive chorus of layered vocals leads us back into the opening riff and repeats once more. Slight yet noticeable variations then see the song through to its six-minute conclusion.

The second single, and album opener, Let It Out, hands the microphone over to Byron Short. Impressively, the Sunset Junkies and the strength of their songwriting, allow the unusual dynamic of interchanging male and female singers to stand on its own two feet rather than appear gimmicky. Evergrey guitars and drums roar to the fore before settling into an acoustic guitar and keyboard driven verse. The intro is revisited to move the chorus onwards and then at the midway point of proceedings a reprise of the chorus takes a majestic turn with yet more layered vocals and harmonies.
At this point most bands would be happy to end a track on such a crescendo, not Sunset Junkies, as the vocalists play off one another in a disarmingly beautiful (yes I said that) way. Again, at this point, most bands would happily yell ‘CUT’ and be done with it. Not Sunset Junkies! The chorus is given another airing and by song’s end it is hard to believe they
have crammed so much into just four short minutes.

To this point, Sunset Junkies have shown themselves to be progressive rockers with a heavier edge delicately balanced against excursions into intricate vocal arrangements. Will the album be more of the same? The aforementioned Let It Out leads into the second track I Wanna Be The One and yup these guys have done it again. A banging start, perfectly
matched lyrics sung by Ellie, leading into a powerful chorus. However, this time the change-up is by way of an acoustic guitar and bird noises, don’t worry, it works. Building for just long enough until winding its way back to the chorus. A hushed voice spends a minute or so reading poetry, the sound of rushing wind adding to the desolate vibe of Lily before Byron slides into the verse and the vocalists duel over another fantastic chorus.

Dark Dreams is a song that is in no rush to get to wherever it is going. Byron again takes on the vocal duties for the verse. And this time rather than slam the listener with a catchy, rocking chorus, a more cinematic approach is taken. The kind of music you might hear when George Clooney plays an astronaut and sees the sun from space for the first time. It is five minutes well spent indulging what until now had just been glimpses into the band’s repertoire.

Pentagram re-ignites the rock and the band then doubles down for Love_War. A song that pulls off that incredibly difficult trick of sounding familiar the very first time you hear it, but not in an Ed Sheeran copycat kinda way. It is yet more proof that Sunset Junkies have got a knack for writing great, alternative/progressive tinged, heavy rock. The surprise this time around is an almost Mike and the Mechanics moment that then opens the door to setting the guitars and drums loose. A highlight.

Godless channels its inner Alice in Chains, and it is testament to this group’s talent that the comparison can be made without any hint of hyperbole.

Spoiler Alert: The penultimate track Darker Still, with its samples of crashing waves and flowing water, should not be listened to on a full bladder. And the accompanying anguished cries are truly disturbing, but there is nothing of musical note here, more an aural representation of what it would sound like if Event Horizon took place on the set of Master and Commander.

Divinity ends things by spending eight minutes perfectly encapsulating what this album is all about. An initial burst of heaviness interrupted by a quite unexpected, almost choir-like vocal arrangement that circles back seamlessly to where it all began.

Darkness Visible is an album that on the first listen may appear to be offering mixed messages, with its prog/alt-rock vibe punctuated by journeys into altogether different musical realms. However, on subsequent listens these moments move beyond seeming like mere indulgent garnishes and show themselves for what they are, indispensable. And this is what sets Sunset Junkies apart from most of their contemporaries. The bravery to not just be content with writing killer riffs and catchy choruses, but to colour outside the lines and offer a rare, original take on hard, progressive rock.

Hell, even the album cover makes sense after listening to the lyrics! So, take the time to immerse yourself in the world that Sunset Junkies has created. The darkness may indeed be visible, but on this occasion it’s a view well worth savouring.