Hot off the back of their Lower The Bar album Steel Panther, who just happen to be one of the hottest bands in the world at the moment, are making their way to Australia for a tour. HEAVY was lucky enough to be able to sit down and chat to the man himself Michael Starr to see what exactly the band has in store for Australia.

“You can certainly expect something you have never seen before,” says Michael laughing when we start to talk about the tour. “This is a night with Steel Panther, or should I say an evening with Steel Panther with two one hour sets. The first one will be a set that we used to do in the early 2000s  and the late 90s on the Sunset Strip, it is going to be a really cool show with a cover of our favourite hard rock and metal tracks. There will be an intermission and a set changeover and then we’ll deliver all the classic Steel Panther hits for another hour. It is going to be a great evening and I really am excited that people are going to come to the show… they are going to love it!”

That leads me to ask exactly what kinds of music Steel Panther were covering when they first started out in L.A. all those years ago. “Well when first started heavy metal was totally popular and kicking ass,” he says. “And then all of a sudden grunge came out and heavy metal was gone. So what we started doing because we couldn’t get a record deal with our heavy metal music was do these shows were we covered bands like Ciderella, Def Leopard, Skid Row… the list goes on. Then we started playing on the Sunset Strip every Monday night, it became really popular because people were really missing the metal and grunge had taken over. By the time 2002 comes around we are full flight with this show. So that is what we are doing right now… we are bringing back that show that started everything for Steel Panther. 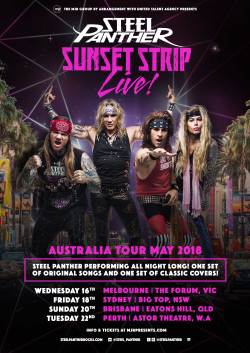