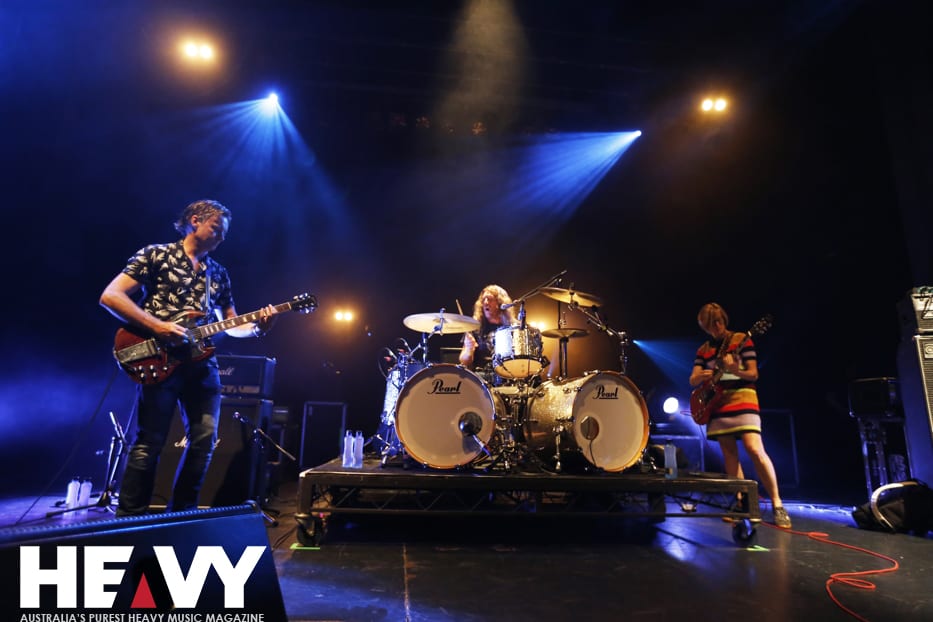 If you saw a poster for tonight’s show, Spiderbait, The Meanies and Screamfeeder at the Enmore, you could be forgiven for thinking you’d travelled back in time to 1996. A time when live music venues were still thriving in this city, when the word “alternative” actually meant alternative, and DJ’s weren’t considered “musicians”. It’s also the time when a trio from the Riverina town of Finley leapt from the fringes to the forefront of the Aussie music scene with the release of their seminal album Ivy and the Big Apples. Tonight, The ‘Bait are in town to celebrate Ivy’s twentieth birthday, and a large throng of punters have rocked up to join the party.
Brisbane alternative rockers
Brisbane alternative rockers Screamfeeder need no introduction, having been mainstays of the Australian independent music scene since the early nineties. After a bit of a hiatus, the band have recently finished recording their seventh studio album, Pop Guilt, and will be commencing their own headline tour next month. Their guitar driven pop-rock sounded great at the old venue, and the set list was a blend of old and new. It was great to see Screamfeeder back doing what they do best, and new song Shelter and old favourite Hi Cs were the highlights. New album is out on April 21.

Next up, the indie punk institution that is The Meanies. I dare say, if you haven’t seen this band live, you haven’t lived, and while Link and the boys have toned it down in recent years, the words “high energy” still barely describe it. Short, fast, loud, gritty, and anthemic, they slugged us in the guts with classic tracks including Never, There’s a Gap, Scum, Kill, 10% Weird, and Gangrenous. Front-man Link Meanie spent almost as much time falling and rolling around on the floor as he did standing up, and bassist Wally Meanie was as rock solid as ever. The crowd joined in too, with plenty of punters singing along, and the occasional mosh pit breaking out. The guys were sent off with an ebullient cheer from the crowd.

With the punters primed, Spiderbait strolled out to a huge cheer. Kram reiterated that tonight, they were playing Ivy and the Big Apples in full, and asked the crowd if they were ready. The collective response of “YEAH” echoed through the Enmore, and then that cool, recognisable opening riff of Chest Hair was blasting through the PA. As you’d expect, the hit songs such as Buy Me A Pony and Calypso had the place rocking, but it was lesser known album tracks such as Hot Water And Milk, Should Have Done What My Mum Always Told Me To, and Driving Up the Ceiling that underlined the fact that Ivy and the Big Apples is all killer, no filler. Instrumental tracks When Fusion Ruled the Earth and Horshack Army (despite some technical difficulties), also went over well. When they were done, it was abundantly clear that Ivy and the Big Apples has entrenched itself into Aussie rock as a truly classic album, and deservedly so.
With the crowd baying for more, the band obliged, with a triple encore that blew the roof off. Old Man Sam instigated some old school mosh pit action, Fucken Awesome was just that, and the now infamous Lead Belly cover, Black Betty was the perfect way to end a great show.

Tonight confirmed what most of us there already knew….. Ivy and the Big Apples holds its own as a classic album, and Spiderbait still kill it live!