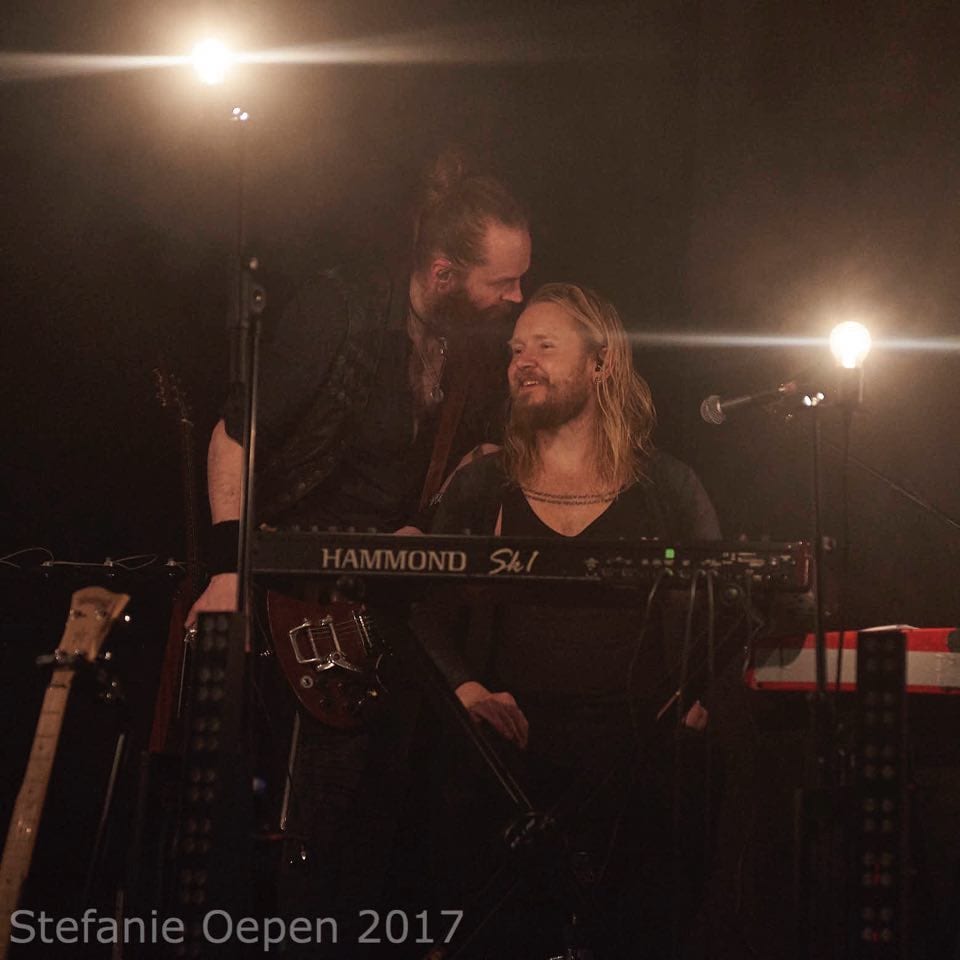 When SÓLSTAFIR asked their friends and label mates, ÁRSTÍÐIR to join them on their current European tour, the Icelanders had of course no strings attached. As it turns out, there are some keys in it though…

ÁRSTÍÐIR keyboarder Ragnar Ólafsson has happily accepted to give a helping hand or rather two to the enigmatic Icelandic rockers. This is of course a temporary arrangement, so don’t miss your chance to see this special touring line-up on the road right now.

As shows have already been sold out and tickets are running low in others venues, we strongly recommend to book in advance.

SÓLSTAFIR have successfully embarked on the second leg of their 2017 European tour. The enigmatic Icelandic rockers have been joined by MYRKUR and Icelandic label mates ÁRSTÍÐIR. The final curtain of this massive journey will fall at Debaser Strand in Stockholm, Sweden on the 20th of December. 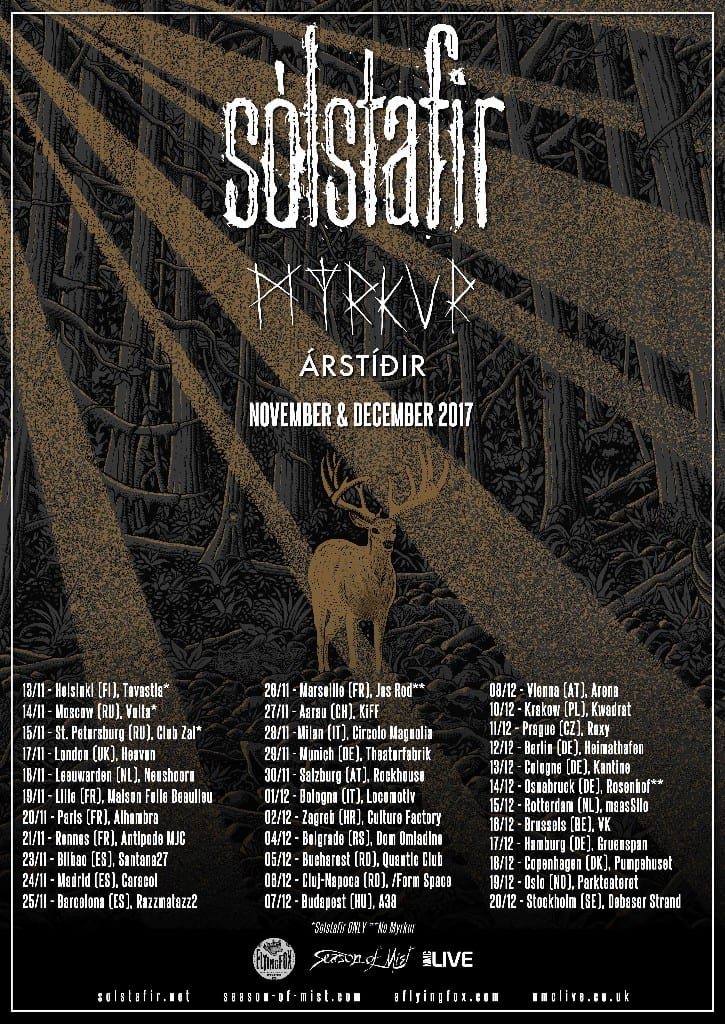 ÁRSTÍÐIR have emerged from the burgeoning Icelandic music scene in 2008, when the three founding members coming from different genres discovered their mutual love for vocal harmonies. Daniel, Gunnar and Ragnar quickly went from playing acoustic cover versions to their own sonic footprint amalgamating influences from classical, folk, rock, and minimalist music into something quite unique, which might be carefully dubbed “Icelandic independent”.

With early lyrical references pointing towards the spectacular nature and scenery of this volcanic island and the strongly contrasting moods of its seasons, the band took the name ÁRSTÍÐIR, which means “seasons” in their native Icelandic tongue.

At home, the band experienced a fast rise. Only four months after their conception, ÁRSTÍÐIR had risen from performing in a coffee shop in Reykjavik to scoring a number one hit on national radio with the track “Sunday Morning”.

The Icelanders published their eponymous debut, ‘Árstíðir’ in summer 2009, and while their home country was reeling from the market crash, the bands stocks went up. During the air traffic disrupting eruption of the Eyjafjallajökull volcano. a first international tour started that led to ÁRSTÍÐIR continuing to tour relentlessly over the next years and gather a dedicated fan base in more than 30 countries.

Their second album, ‘Svefns Og Vöku Skil’ followed in 2011 and only a year later, the Icelanders won the prestigious Eiserner Eversteiner European Folk Music Award in Germany. While on the road in Germany in 2013, a friend of ÁRSTÍÐIR recorded an impromptu performance of the old Icelandic hymn, “Heyr Himna Smiður” in a train station, which went viral on YouTube and has attracted more than 6 million views by now.

ÁRSTÍÐIR launched a highly successful crowdfunding campaign in 2014 to finance the recording of their third full-length ‘Hvel’, which translates as “spheres” and following its release, the band embarked on a first US tour that reached from coast to coast.

A collaboration with Anneke Van Giersbergen followed in 2016. The album, ‘Verloren Verleden’ contains a collection of re-imagined traditional and classical songs.

Currently, ÁRSTÍÐIR are working on their forthcoming fourth album, which will be released through Season of Mist worldwide in 2018. 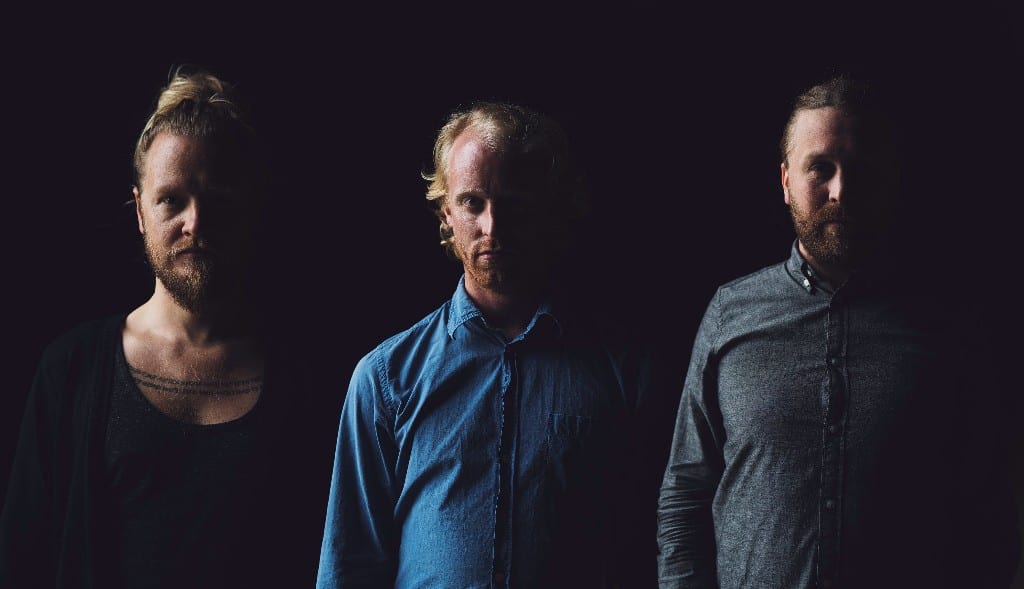