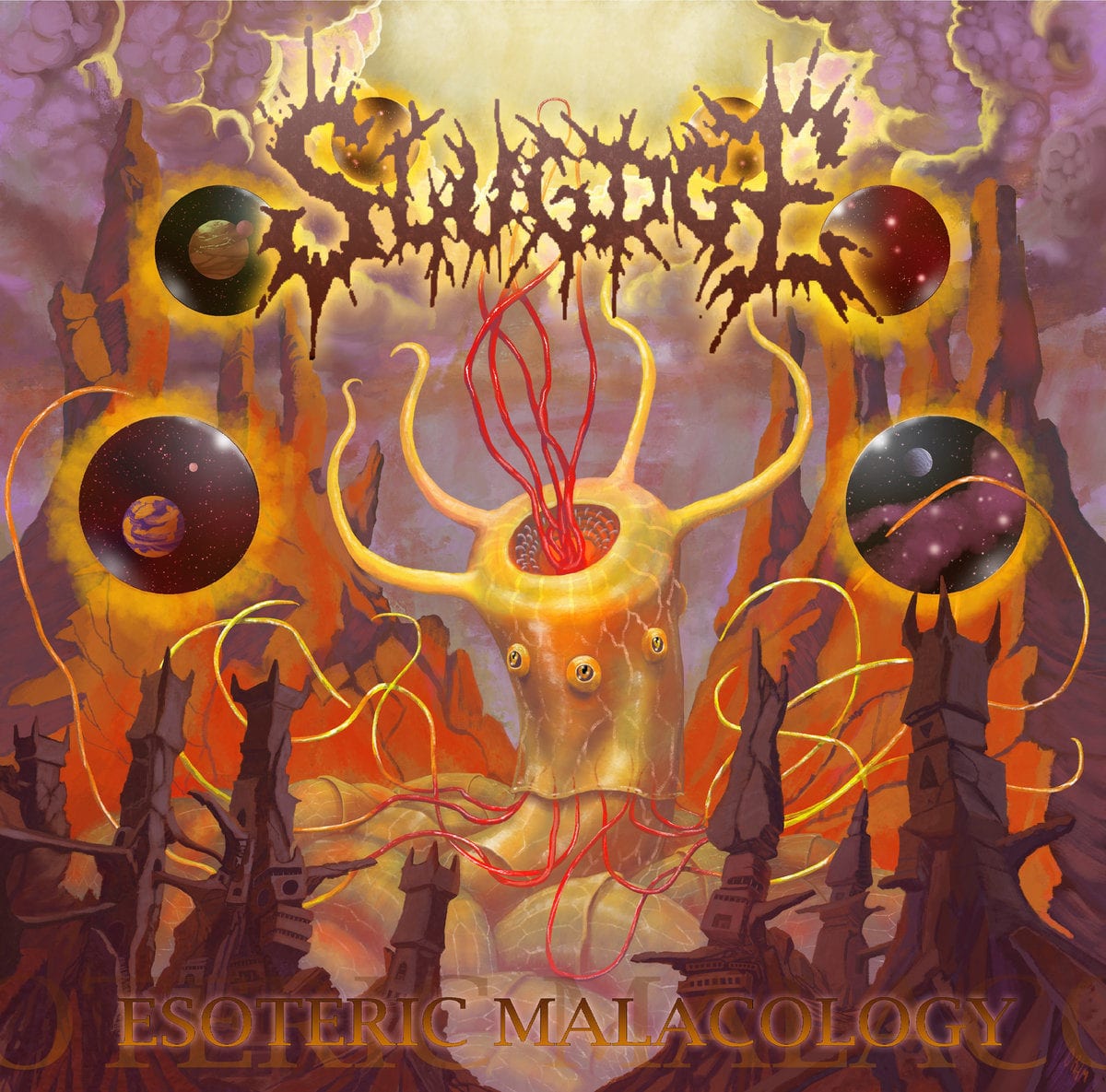 So…SLUGDGE (Pronounced ‘Slug-j’ The D is silent!) Straight off the bat, Slugdge is the best extreme metal British band you haven’t heard yet! And I use the term “band” very loosely. Slugdge is but a mere yet incredible two piece ensemble consisting of Matt Moss & Kev Pearson both of whom have seemingly lived in an underground slime filled basement just writing and perfecting their craft.

Formed in 2012, Esoteric Malacology is Slugdge’s fourth full-length release but they’re first for a major label, that being Willowtip Records and I will openly say that this is my first venture into their slug loving abyss and I love it here. The moment I heard the first song “War Squids” kick in, I had a feeling my ears would be in for something special for the next sixty minutes. Immediately Slugdge grabs us by the throat and punches us in the senses with all the bands and influences both the band and us, the listeners love. Groove-laden guitars galloping along to double kicks and blast beats then lunging into killer vocal growls then extended into and beautifully complimented by a vocal choral arrangement with a huge expansive slowed down tempo rhythm which serenades us through a moment of deathly bliss and then onwards we slither forward in the journey of the War Squids and their sheer excellence. Damn, that is a fine intro!

Next up is “Crop Killer”, which begins with a peaceful nice little murky bass intro and then the guitars and drums kick in and we are instantly hit with the thoughts of a clear Mastodon influence, and then back down the tempo is quickly led, merging into clean, reverb-filled clean vocals giving the opening two minutes of “Crop Killer” a cosmic, godlike netherwordly feel. As a listener, as a musician and also as a reviewer I need to keep reminding myself that this album and the songs contained and magnificently crafted within it are the work of just two dudes. I read and watched a couple of reviews regarding both the band and the album and a few repeating comparisons are made, and that is the heavy vocals are reminiscent of Mikael’s work on Bloodbath, but I would like to add I hear similarities of Jonny Davy of Job For A Cowboy and musically “Crop Killer” has all the hallmarks of a bastard slug child of these two bands and more. But regardless, “Crop Killer” fucking rules and Slugdge’s influences make it so.

And while I’m speaking of songs that fucking RULE, let’s talk track three. “The Spectral Burrows”. A clearly progressive death metal track from the outset, but at the thirty second mark, Slugdge decides to introduce us to a massive vocal black metal-esque, clean baritone Gregorian chant choral verse which is where the album decides to just up the stakes on itself. It keeps the listeners engaged on this journey of Esoteric Malacology as detailed by the Molusc loving clergy comprised of Matt & Kev. After the choir have had their moment, the progressive death mood is brought back to give a compliment to the overall Slug Heaven Overlord theme. However,  at two minutes the mood and feeling of the song does a 180 degree turn where the music slows to an intense deep rhythmic guitar driven simplicity and vocals embark on a beautiful deep clean range begging us to look deep into the dark recesses of nothing. So captivating! And on we traverse the slimy landscape forged by Slugdge.

Half way in “Slave Goo World” is pretty much as straight up progressive death as it comes. Nothing new or ground breaking, but there is nothing wrong with it either. It has all the Slugdge traits and formula’s that we’ve experienced on this journey thus far.

At this point, I will state that all of the songs titles on Esoteric Malacology are a play on words of well-known metal songs and track five “Transilvanian Fungus” is no exception. It kicks in with a black, doom intro and then the song continues with elements of the death/doom, slow and deep feeling with some cold black metal leads that are still defining who Slugdge are if this is your first date with them. And as the songs title alludes to black metal respects, “Transilvanian Fungus” is the black metal song on the album.

“Putrid Fairytale” was the first teaser released by the band and my first thoughts are of a demon bastard child hybrid spawned by the parents of early In Flames mated with Bloodbath. I fucking love it \m/   \m/Birthed out of “Putrid Fairytale” is “Salt Thrower” and is the first slow and also the longest song on the album and that isn’t a complaint. Its the moment where the listener can actually almost take a moment to breathe and hear the sonic complexity and sheer magnificence of all Slugdge have to offer on Esoteric Malacology. All the heavy brilliance is still here, but it barely allows us to move our heads to more than a happy slow nod. And unfortunately, now we come to the final song on Esoteric Malacology “Limo Vincit Omnia”, and it is a killer end to and already near perfect album. It is part black, it is part death, it is also part progressive gallop riff driven, but make no mistake readers, it is overall a momentous end note to Slugdge’s fourth album. Perfectly combining all that we have heard and experienced over the past hour.

Esoteric Malacology is eight songs spanning just under an hour and every second is a truly heavy fucking captivating one. I can barely fault this record and just as I sated at the beginning, Slugdge being the best extreme metal British band you haven’t heard yet, Esoteric Malacology is the best hour of music released this year that you haven’t heard yet!