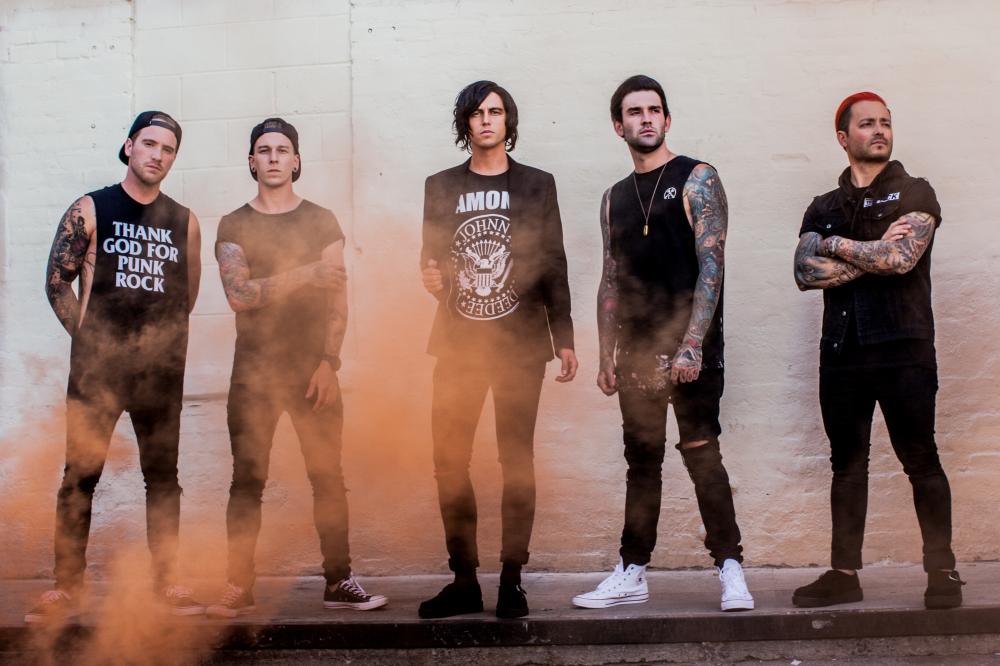 Orlando, Florida alternative rock/metalcore outfit Sleeping With Sirens are returning to Australian soil in 2018 for their Gossip World Tour! Last here in 2015 on a string of sold-out shows, Sleeping With Sirens will be here in April next year to celebrate the release of their latest album, Gossip, which saw its release recently on September 22. Joining Sleeping With Sirens on this epic tour, presented by MJR Presents by arrangement with UTA will be Chase Atlantic, Lower Than Atlantis and The Faim.
Tickets will go on pre-sale on Wednesday 6th December and General Sale Friday 8th December at mjrpresents.com!
The outfit, known for their vocalist, Kellin Quinn’s impossibly high vocal range, are dropping in down under and making stops in Sydney at the Big Top Saturday April 21, Melbourne Sunday April 22 at Festival Hall, Tuesday 24th April at Thebarton Theatre in Adelaide, Wednesday 25th April at Metro City in Perth, Friday 27th April at Eatons Hill Hotel, Brisbane and will jump over the ditch to New Zealand to play Auckland on Sunday April 29 at Logan Campbell Centre.
Through taking quantum sonic leaps with this new album Gossip, the quintet—Kellin Quinn [vocals, keyboards], Jack Fowler [lead guitar], Nick Martin [rhythm guitar], Justin Hills [bass], and Gabe Barham [drums]—reach the artistic heights they began angling for nearly 10 years ago, while amplifying musical hallmarks such as soaring and soul-striking vocals, wildly catchy riffing, and intricate beats.
At its heart, the record reflects not only creative progression, but personal as well. “The story of Gossip really begins in me transitioning from a boy to a man,” admits Kellin. “I grew up basically my entire life playing music in this group. This record is me figuring out who I’m supposed to be as a musician, a husband, and a father. It’s a hard, scary, rewarding, and daring process that gets chronicled in the lyrics. Musically, I feel like it’s the first Sirens record that sounds specifically like us. We took chances, experimented, and continued to do what we do best: create art. It’s something new. It has an authentic sound that we’ve been working towards all this time.”
Ultimately, the risks yield Sleeping With Sirens’ boldest, brightest, and best work to date.
“No matter what anyone says, I  want to encourage listeners to take risks of their own,” Kellin leaves off. “Our band took a chance. We’re going to back it. That’s all you can do as an artist. This is my diary. It’s who I am.”
Tickets for Sleeping with Sirens’ Gossip World Tour 2018 in AU + NZ go on pre-sale tomorrow, Wednesday 6th December and General Sale Friday 8th December at mjrpresents.com. PrevPrevious.Heavy Goes Behind The Scenes Of Jurassic World: Fallen Kingdom
Next.The Set To Be Re-ReleasedNext