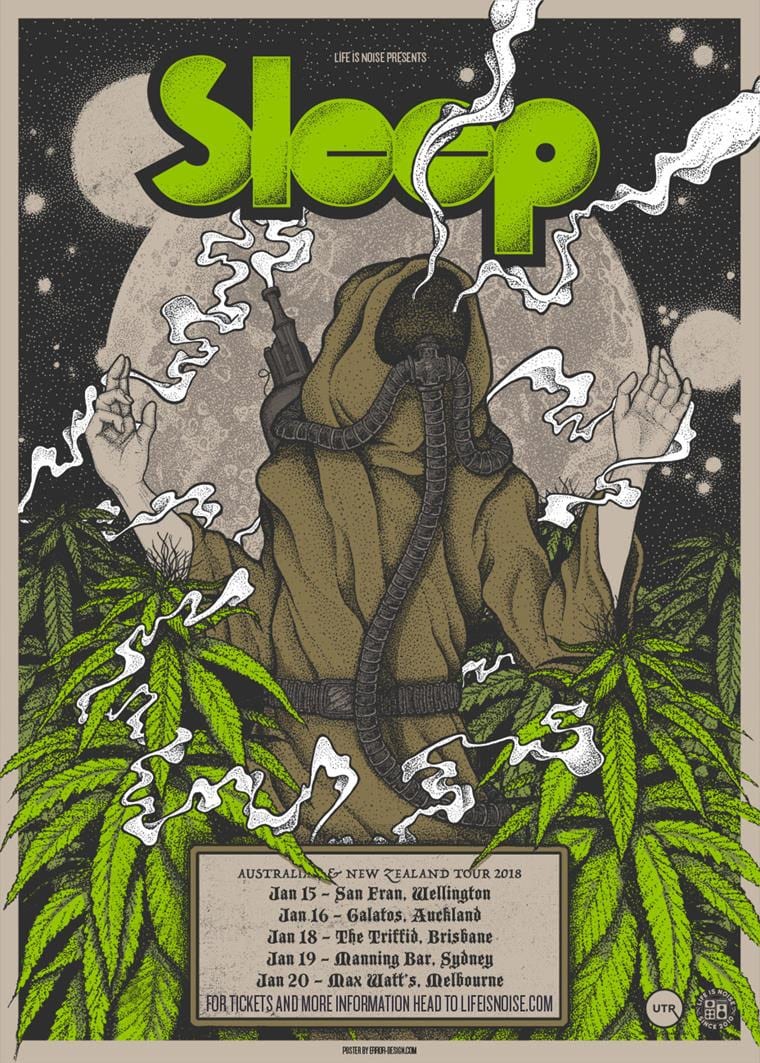 LIFE IS NOISE is proud to announce the return of seminal stoner/doom trio Sleep to Australian shores in January, as well as their first-ever performances in New Zealand. The band will be slinging bong-rattling riffs to venues in Wellington and Auckland before crossing the Tasman to play shows in Brisbane, Sydney and Melbourne.

“Sleep don’t play songs so much as build them with a deliberate patience that seems like meditation. Intros go for minutes on end, picking up momentum and power almost imperceptibly until, like storm clouds unable to bear their own weight, they finally unleash their awesome power.”
– Henry Rollins

Few can compare to the monolithic sounds of Sleep. The band set a new framework for stoner-metal enthusiasts through worship of the walloping tone of ‘70s tube amps, Iommi-esque riff-work and marijuana. Dopesmoker changed the genre as we know it, turning weed into its own religion as listeners followed the smoke to the riff-filled land.

“With a band like Sleep the only thing to really do is let the music take you over and focus on what comes across as one continuous composition. The music is abrasive yet strangely comforting in its ability to lock the listener into a trance-like state, stoned or not.”
– Glide Magazine

Seeing Sleep live is an experience that blows eardrums and minds alike. Witnesses to the band’s appearance at 2014’s Meredith Music Festival (or the associated Australian tour) will attest to the mind-bending tones and tar-soaked grooves emanating from a ludicrously oversized wall of amplifiers. The experience is akin to drenching yourself in resin, allowing the music to slowly burn and dance through you like a wandering flame.

“What seems disorienting and monochromatic at first grows richer and more rewarding upon repeated exposure. It’s like a Mark Rothko painting hitting you over the head with a bag of hammers.”
– The New York Times

Sleep arrive in New Zealand and Australia in January, 2018. Be sure to grab tickets quickly, as the rare chance to see these titans of metal won’t last for long.

Catch Sleep on the following dates:

Tickets and further information from lifeisnoise.com