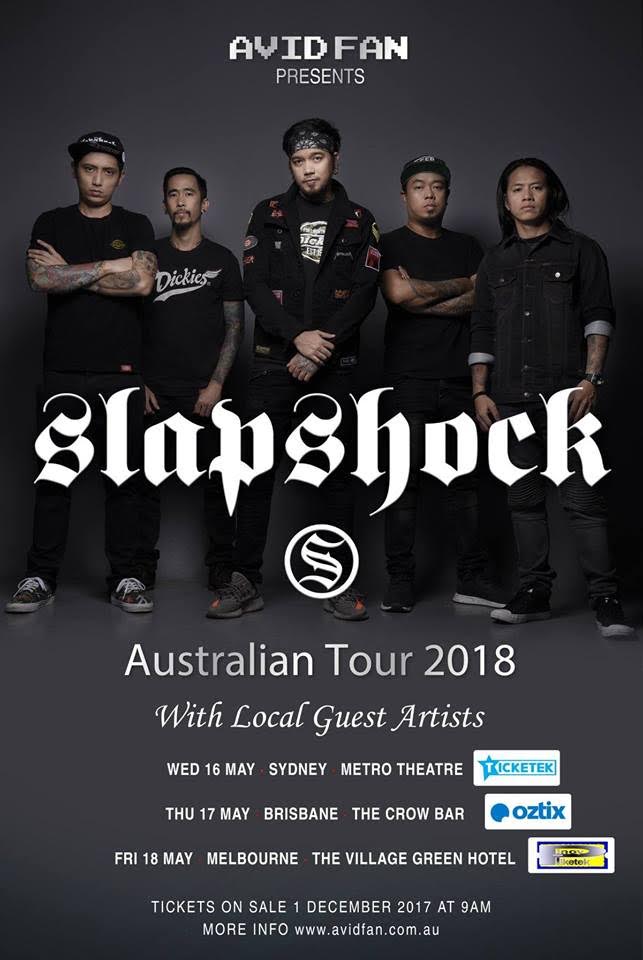 With a career spanning more than two decades, several platinum albums and countless global tours across Asia, the US and Canada, Filippino nu-metal band, Slapshock, will be heading to Australian shores for the very first time this May.

Australian heavy music fans will witness the raw power and energy of the Philippines’ biggest metal act live as they play Sydney (16 May – The Metro Theatre), Brisbane (17 May – Crow Bar) and Melbourne (18 May – Village Green).

The tour will mark the milestone of their new album, ‘Atake,’ which was released 13th December.

Since forming in 1997, Slapshock have recorded and released nine studio albums through both EMI Philippines and current label BMBX (owned by Apl.de.Ap of the Black Eyed Peas).  Slapshock’s first three albums, ‘4th Degree Burn’ (1998), ‘Headtrip’ (2001) and ‘Project 11-41’ went platinum with many others achieving gold status including their 2014 LP, ‘Night Owls,’ which was produced by Apl.de.Ap (Black Eyed Peas) and Shavo Odadjian (System of A Down).

The band have won several awards including ‘Band of the Year’ and ‘Listener’s Choice’ twice, ‘Best New Artist’ (2000) and have shared the stage with countless heavyweights such as Korn, Killswitch Engage, Avenged Sevenfold, Machine Head and more.