It doesn’t take very many minutes into interviewing Skindred’s front-man Benji Webbe to learn that he is a bit of a character. As we joke about the fact that he is nice and warm and I’m freezing cold (it’s a wet and windy Melbourne night) he jokes that I need someone to keep me warm – a joke that we both end up laughing too… and yes I soon realise that he is someone you want to make laugh just to hear just to hear his amazing laugh.

Many Aussie metal fans are about to get an up close and personal look at Skindred as the band open The Cavalera Brothers’ shows on their Roots Revisited tour. As mine and Benji’s chat turns to Roots as an album he surprises me by telling me that his friendship with Max Cavalera didn’t start with him idolising Sepultura, in fact, it was the other way around.

“I wasn’t a fan of Roots to start out,” he says. “But Max was a huge fan of my band Dub War. That was absolutely incredible for me, to know that Max Cavalera was wearing my little punk rock band from England’s T-Shirt was amazing. He was a big fan… he loved the band. It was strange that after all of those years of listening to Sepultura I’d become friends of the family. It’s crazy. Basically, Max was a friend of the record label we were on and they would send him music from all their new signings and then Max heard Dub War and was like ‘oh my God this band changed my life’ and he loved us. When we were in New York he was there too and he came to our hotel and said ‘I’m Max Cavalera, I love what you do. We’ll have to tour sometime. Twenty-five years later and he we are we are finally touring. Here we are coming to Australia, but Max is a very cool cat and he has always been very supportive of what I do, and I got to sing on the first Soulfly album which was incredible.”

Benji is quick to add though that the fact that Skindred is now touring Australia with Max is another stroke of good luck. “The promoter just wanted a package that was going to blow people’s f**king heads off,” he explains. “So they got Skindred and the Cavalera boys to come down, and this isn’t happening anywhere else in the world – it is only happening in Australia. We’re very fortunate to be coming down to Australia with those guys and we know that it is going to be one hell of a show.”

His description of the shows is spot on as Skindred have developed a reputation over the years of being one of the finest live metal bands in the world, but Benji says he isn’t sure how that rep has been built. “We just do our thing, man,” he says. “Whatever our thing is it somehow gets us that reputation. We don’t have pyrotechnics or anything like that we just love our instruments and we play what I call balls-out, we give it all we have whenever we go on stage. It doesn’t matter if it’s 13 people in a small bar or 13,000 people at a festival. We never approach it differently even though we do rather it be 50,000 people rather than 6 people at a bar, but if it is 6 people in a bar then those 6 people are going to get the best fking show of their lives. I believe if I’m going to do a job then I’m going to do it properly, it doesn’t matter whether my girlfriend is giving me st beforehand or not, my job is not to take my stupid little personal world and take it front of people and be like ‘ewww I’ve had a sh*y day… that’s bollocks. People don’t care if you’ve had a bad day, they’ve paid twenty-five quid to come and see you and they want a rock n’ roll show. So whether I turn up and I’m depressed or I’m pissed off it doesn’t matter I’m still going to put on the show of my life. Because the way I look at it, mate, nobody is promised tomorrow, every show could be your last fking show in a world like this.”

As Benji and I talk about the fact that Skindred always has people debating online what kind of music they play to which he declares ‘it’s just rock ‘n’ roll… they don’t need to debate it.’ We start to talk about the music that he listened to when he was growing up. “I was very heavily influenced by my brother who was into reggae,” he admits. “But the very first record that I ever went and bought of my own was the theme music for Scooby Doo. I just loved that drum roll,” he says laughing hysterically. “But then when I was a little older, when I was a teen, I got into things like ska… stuff like Madness. But I always wanted to be in a band that drew on different worlds, so in front of me there isn’t just black kids and there isn’t just white kids, there are kids from every country under the sun. And they are all dancing – you’ve got kids moshing, you’ve kids doing the poga and they are all doing it to the same song – that’s the kind of music that I want to make… yeah. I love punk rock music, I love the Sex Pistols, I love the British punk rock… not so much the American stuff though. At the end of the day though I just love going on stage and having a good time. I want to go on stage and have the same energy all the time, I want that ‘oooohhhh’ that The Pope gets. When The Pope gets that ‘oooohhhh’ you know that he is in the room. That’s what I want. When Elvis Presley or Michael Jackson walked into a room you knew that they were in the room, and I think that is important for me as a front-man – to be larger than life. Personally, I don’t think there are enough rock gods, rock stars and rock legends, people feel really let down. If you are going to go out there and do it, then do it properly – f**king do it loud I say.”

As we wind up the interview Benji says he has one last thing he wants to say to the Aussie fans before he hits our shores. “You mother f**kers have been stealing our music for years,” he says. “You’ve downloaded illegally and you know that you have.. YOU KNOW THAT YOU HAVE!!! So what I suggest you do is you come to our shows and you bring your T-Shirt money and you support rock ‘n’ roll that way. If you’ve been stealing our music then come and buy a T-Shirt to support Skindred. Come along, it’s going to fun, it’s going to be a jam and don’t forget to bring your T-Shirt money, honey.”

Skindred kick off their tour with The Cavalera Brothers on the 21st September.

GET TICKETS FOR SKINDRED AND ROOTS! 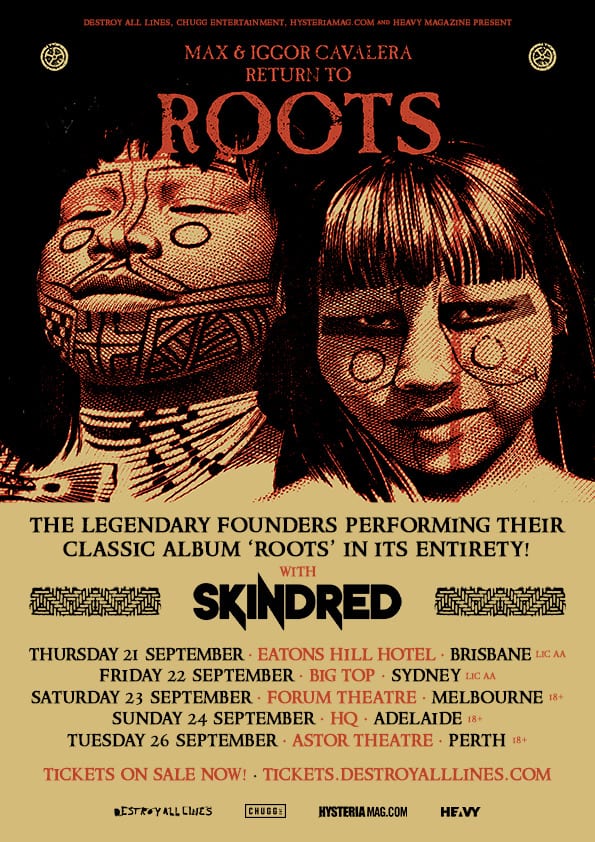