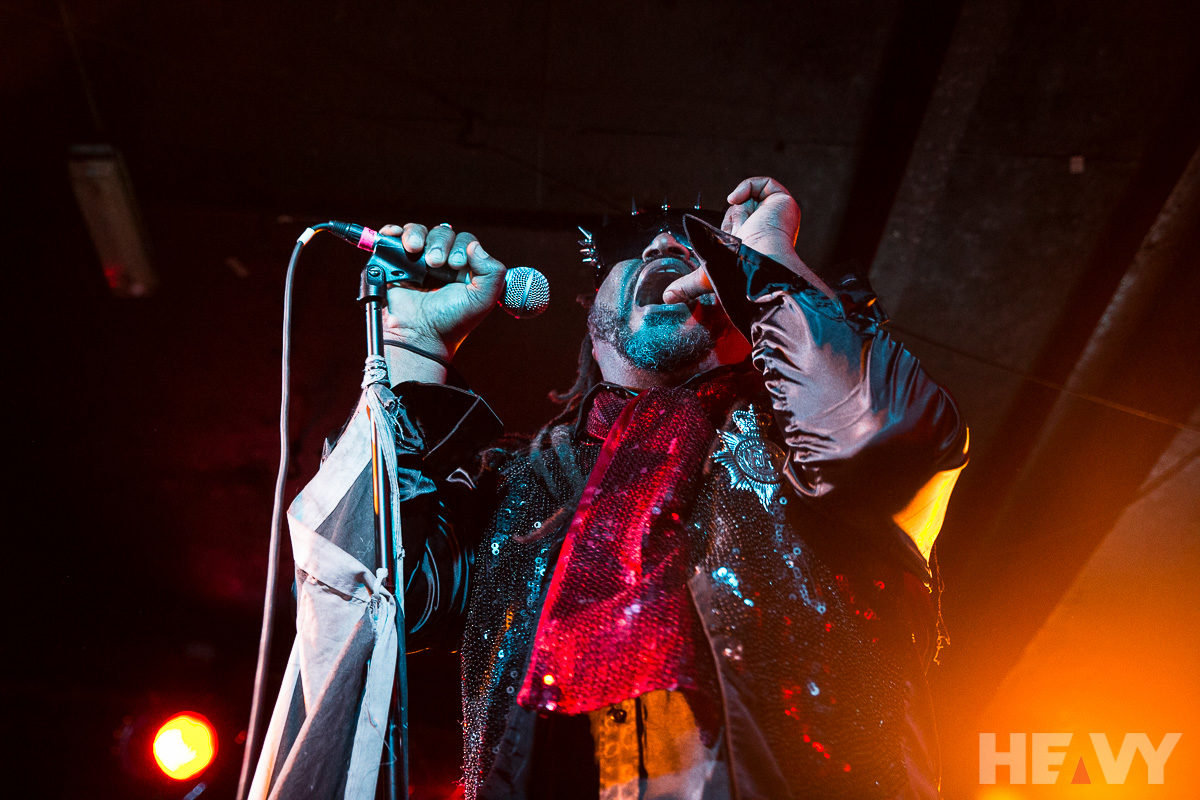 One of the most interesting venues in Camden, The Underworld, has played host to a number of massive names including; The Cranberries, The Darkness, Radiohead, and tonight, Skindred. A short hop across the road from Camden Town Tube station, a moment spent sweet talking the doorman and I’m in. The descent from street level down to the venue is fraught with danger, a windy, sticky staircase, gripping my feet as they traverse the staircase until finally, the room opens up, and the bar staff greet me with their faces full of promise but eyes aware of the rowdiness to come.

On their London leg of their ‘That’s My Jam’ tour, Skindred have been saying that they’ve ‘crammed as many intimate shows into the end of the year as [they] can’

The Underworld is about as intimate as it gets for bands of this calibre (Skindred will be appearing at Download Festival in the summer of 2019) I’ve braced myself for an energetic crowd.

Nestling in beside the sound desk, I look to the run sheet for the night, it reconfirms something I heard earlier, only a two band evening. Strange, for a Saturday night, an expected large pull of fans for the evening, but only one support seems an unusual decision.

The house music dims, suddenly there’s an alarm whooping, my eyes dart across the crowd and circle the stage. It’s a relatively crowded scene on the stage, a full drum kit, synth pad, keyboards, guitars and an ominous posse standing wearing full white, nuclear apocalypse radiation suits. The folk in the white suits aren’t moving, just stood there threateningly, the alarm subsides to the sound of the shuttle launch count town ‘T, minus 10, 9, 8….’ I guess this is where the first band make their move.

‘Welcome to the Black Futures Club’ Two new individuals appear on stage, clad in blue-grey boiler suits, one with a guitar and one taking his place behind the clear perspex drum kit. Self-proclaimed ‘Anarchic Electro Psych Punk Noise’ accurately describe the noise made by the two boys in Black Futures. Identified in an interview by Louder Sound as simply; Space and Vibes, Black Futures throw together loud, untamed astro-punk songs with vibrant expressions of a bleak post-apocalyptic world. The raw energy from the two is admirable, but the crowd are still apprehensive despite verbal encouragement and strong beats. Lyrics alternate between guitarist and drummer, both standing, a peculiar choice for the punk rhythm section, but seems to suit the anti-authority stance, I can virtually hear him saying ‘fu*k you I don’t need to sit down to play drums’.

Without warning, signalled by some kind of telepathy, the white-clad ominous individuals suddenly come alive and dive into the crowd. Confusion now rampant in the audience, there’s more movement, and suddenly there is a greater interest in the performance. These nuclear scientists are not threatening, but dancers, hype hustlers and enjoyment enforcers. Black Futures run through the remainder of their set, working hard to keep the energy high but they’re rewarded with an incredibly memorable show, with great audio mixing and participation. Space and Vibes take a bow and the remainder of their creepy assistants off stage.

The house lights come up and house music is queued to Christmas carols, an interesting choice, suitable for the time of year but a shame to cheapen the anarchic mood raised so courageously by Black Futures.

Veterans of the stage, on the circuits since the early 2000s with an ever growing fan base and reputation, creators and patrons of ‘nu-reggae’ or ‘ragga metal’ and winners of Metal Hammer awards for best live band, Skindred know how to kick-start a party. Touring off the back of the launch of their latest album Big Tings, vocalist Benji Webbe describes the new sounds as ‘less erratic….but still Benji Webbe doing what Benji Webbe does best’ (link) This show is bound to be full of what Mr Webbe does best.

The iconic guitar riffs to AC/DC’s ‘Thunderstruck’ resonate through the venue, inciting cheers and sing-a-longs, acting like a giant magnet pulling more and more people into the already crowded dance floor. Okay, this is it, here they come. Actually, no, ‘Thunderstruck’ plays all the way through. Okay, perhaps this isn’t the start? Another track over the speakers begins, this time it’s the ‘Imperial March’ from Star Wars. Okay, this must be it, trap beats start breaking down the riff, the atmosphere lifts, Skindred must be close. Striding onto the stage, donned in black sequins, Webbe appears to a thunderous applause. Striking the opening chords to ‘Big Tings’ the electro dub-step bass rumbles through my spine all but shaking the pen from my hand.

Skindred ooze the professionalism and prestige of stadium bands, but with the uncanny ability to connect to every person in the crowd. Webbe commands the stage, a larger than life character, waves his black union jack as he jams through a diverse selection of tracks from their seven studio albums. Banging out ‘Pressure’ from their début album ‘Babylon’ still holding true to the original 2002 sound, they refresh the track by interlacing some more AC/DC, this time ‘Back in Black’. This ‘interluding’ is done on several occasions throughout the night, a Christmas carol inside ‘Rat Race’, Tupac’s ‘California Love’ inside ‘That’s My Jam’ and The Prodigy’s ‘Out of Space’ in ‘Kill The Power’.

Webbe addresses the crowd like old friends, urging patrons to live in the moment, and not through a phone, to look after each other, but most importantly, to give away a free sandwich – to a lucky ticket holder who claimed they could eat it in 30 seconds…thankfully, the big guy did it.

Skindred take off from the stage, but there is still an encore to come – these guys deserve it, the crowd want it. Setting up to finish with ‘Warning’ from their ‘Union Black’ album, Skindred has one last trick up their sleeve, they call it the Newport helicopter. Only needing to be told once, the crowd remove their shirts, hold them above their heads, and at the signal, swing the shirts around and around, whipping up a sweat and stank but making for an unforgettable scene to close off the night.

I’ll have to remember to have a shower when I get home.

Skindred continues as one of the hardest working bands in the UK, completing insane touring schedules with unrelenting ferocity. Skindred continually raises the bar for live performance with their genre-bending, self-defining sound. 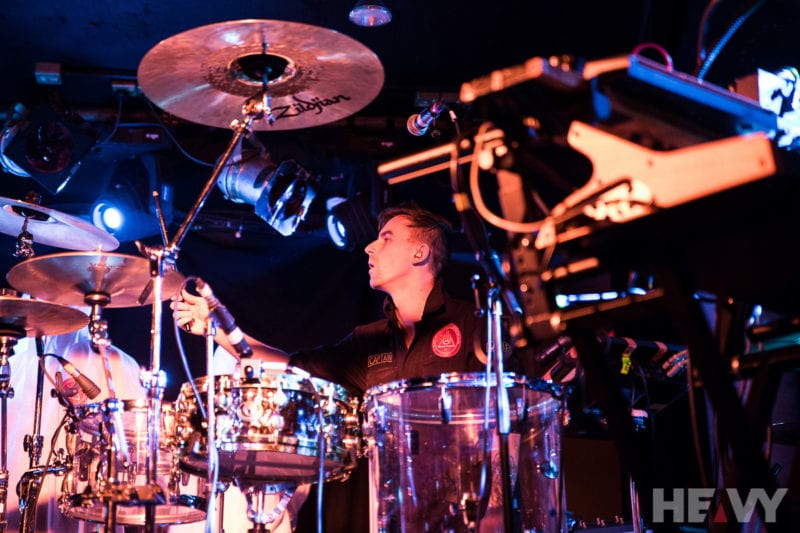 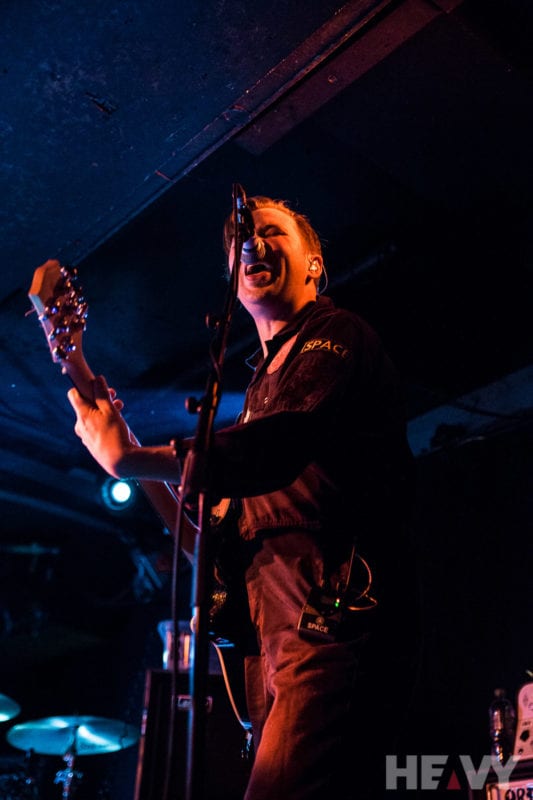 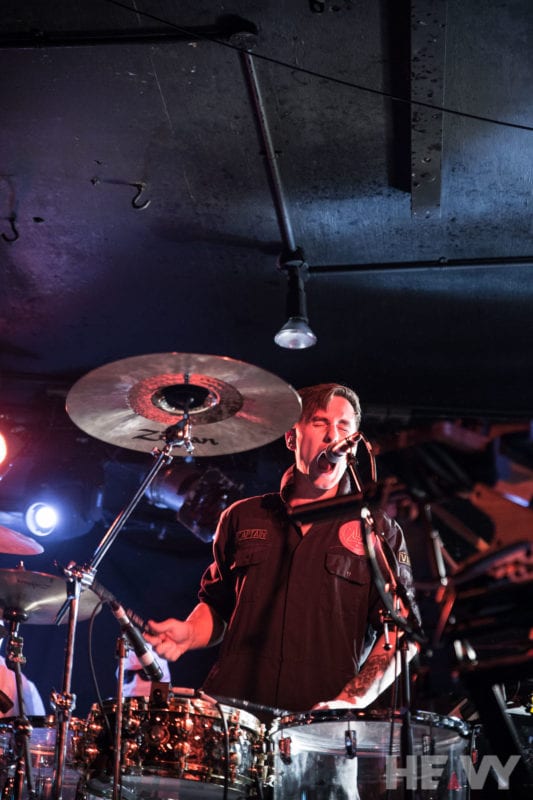 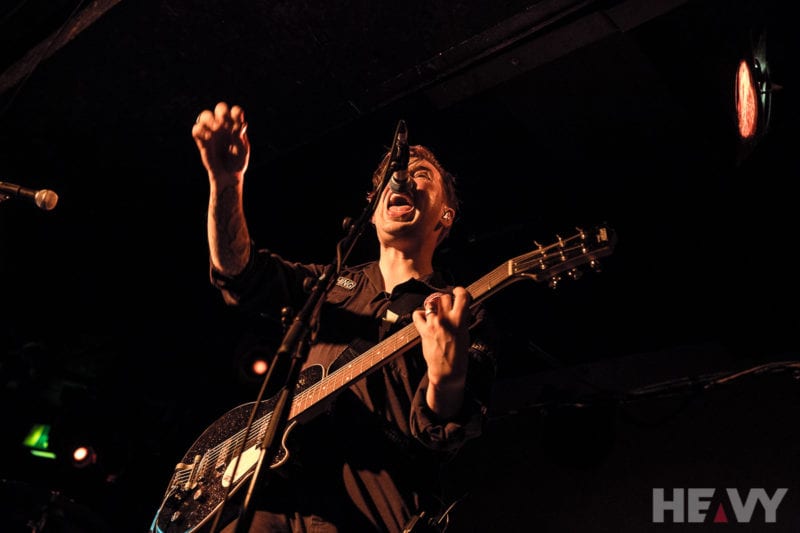 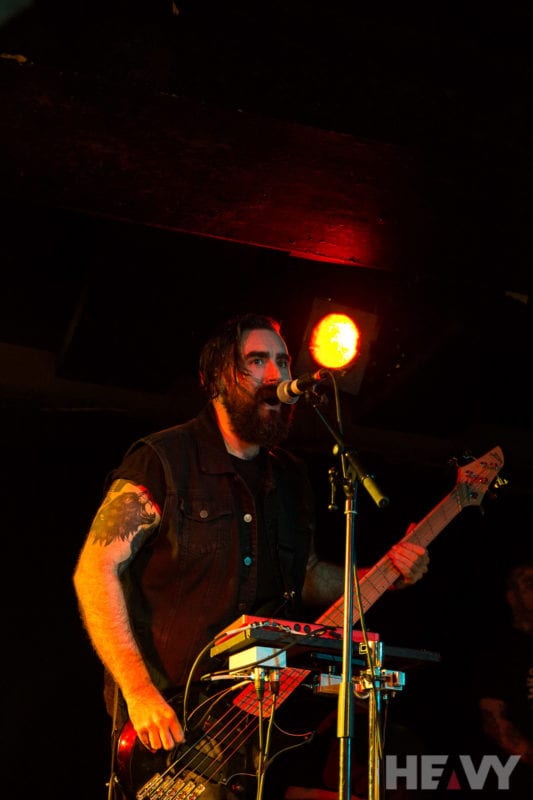 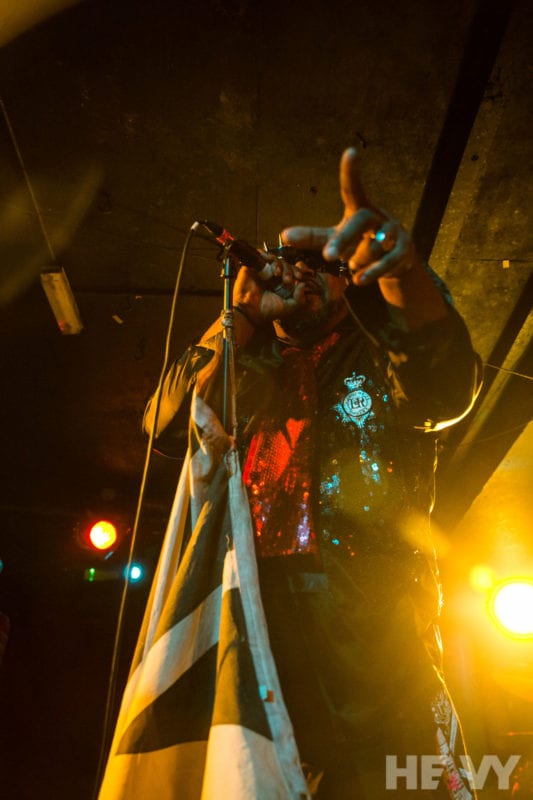 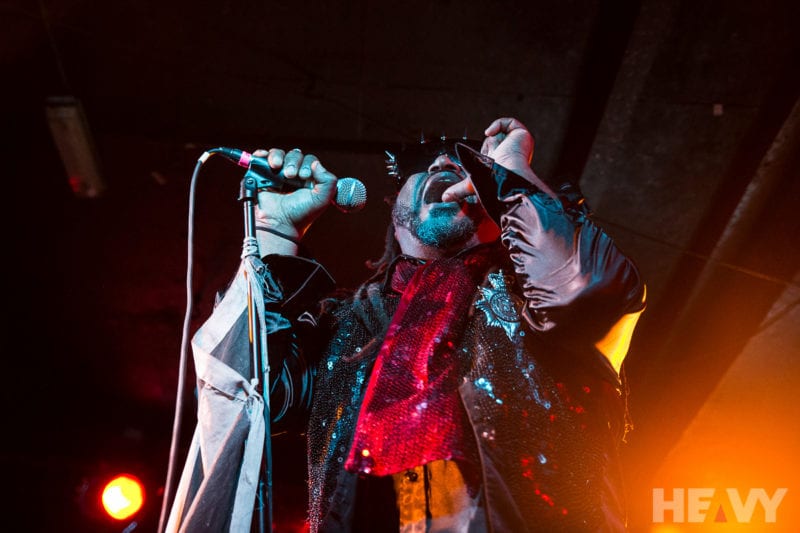 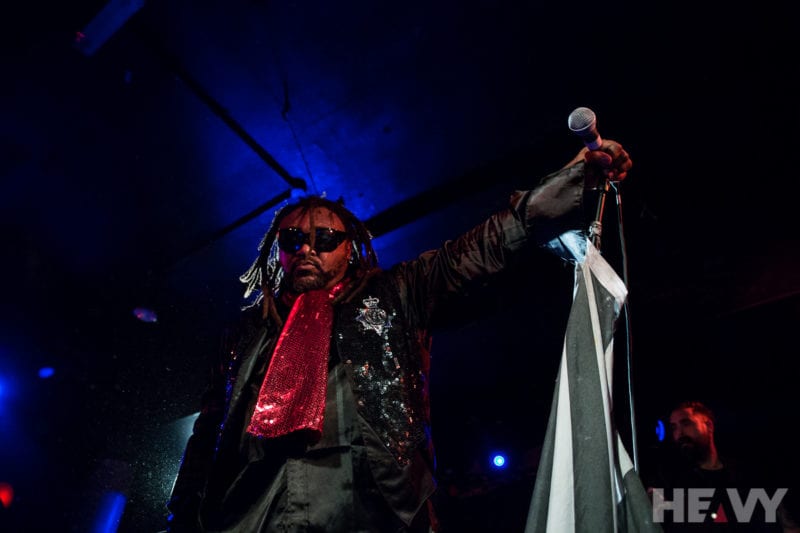 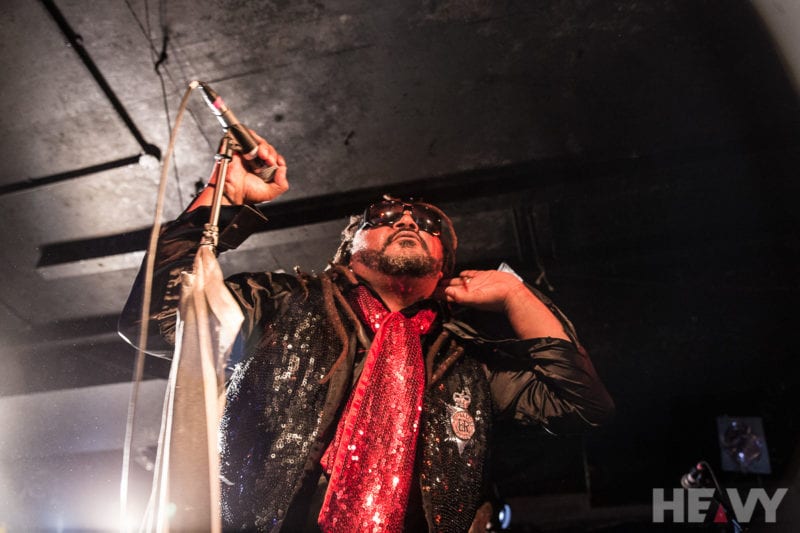 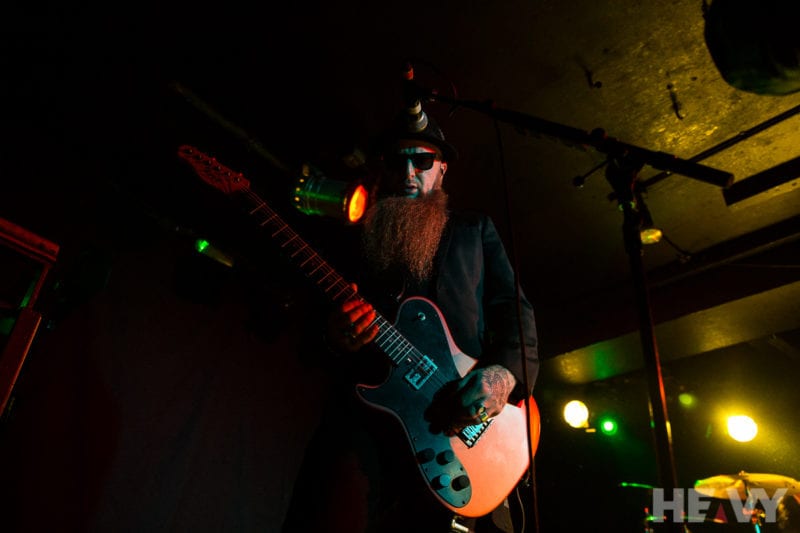