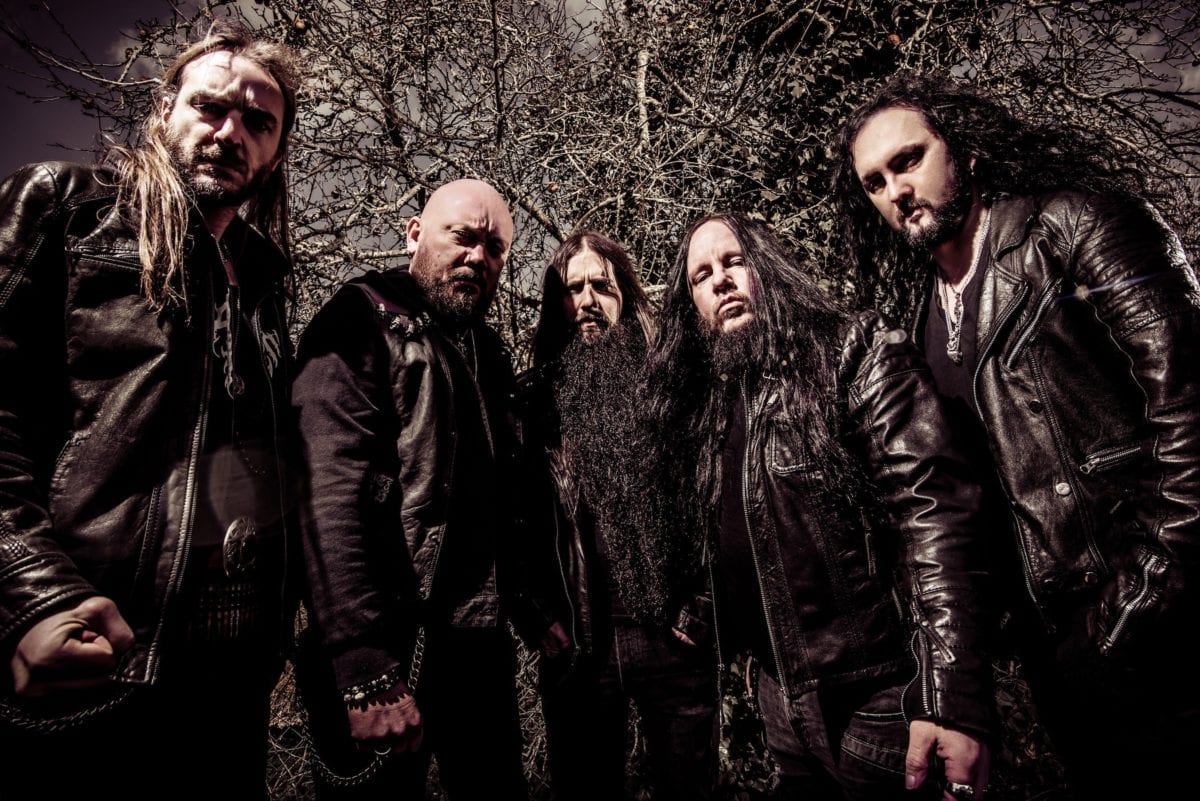 Occasionally, an opportunity comes along that is just too good to pass up. When I heard that death metal “Supergroup” Sinsaenum were gracing our shores, I immediately locked this date into my calendar. Despite it being a Thursday night, the crowd was a little disappointing but, having said that those of us that were present got to witness some truly awesome live music.
Opening tonight was Sydney five-piece death metal outfit Gutter Tactic. I hadn’t seen this band live before, but I’ve only heard good things, particularly about their live show. They certainly didn’t disappoint. Despite the relatively small crowd, they put on a show that was intense, and highly energetic. They were loud, technically accomplished, and brutally heavy.
Tracks such as “Plague”, “Induced Paralysis”, “Genocide”, and “Crucify The Damned” had the small crowd moving, and the walls shaking. Combining blast beats with neck-snapping breakdowns, as well as intricate riffs interweaved with some powerful groove, they showed why they have supported international bands such as Havok, as well as local heavyweights including the likes of Whoretopsy and King Parrot.

Vocalist Chris Devine was impressive. At times roaring like an irate lion, his ultra-low guttural growls overpowered everything. In between songs he was in a jovial mood, indulging in some light-hearted banter with the keen punters up the front.
Influences such as The Black Dahlia Murder and Job For a Cowboy are evident, so if you’re into those bands, you should definitely check Gutter Tactic out.

Next, it was another local band, Tamerlan Empire. Prior to tonight, I hadn’t heard anything about them, but what I saw and heard will be etched into my memory for some time. Tamerlan Empire is one of the most unique bands I’ve ever come across. They combine symphonic black-metal with Central Asian Middle Eastern melodies and rhythms to create a sound that is authentic, powerful, and atmospheric.

Along with the menacing sound, their Arabian knight costumes give the band an imposing stage presence. Sword-wielding vocalist Yassa is a commanding frontman, and he did his best to get the small crowd going. Unfortunately, tonight the vast majority of punters were happy to stand back and nod, rather than get in the pit. But the band didn’t let that stop them, and their performance never wavered in intensity.

“Ottomans Demise”, “Winter March” and “Scattered Sands” from their latest album Age Of Ascendancy were all standouts. Bass player Botir was compelling, enthralling the crowd with his fleeting fingers. Kudos to Tamerlan Empire for attempting to do something completely different. Their distinctive sound reflects the band’s ideology. Having already supported the likes of Enslaved, and now Sinsaenum, they are definitely on an upward trajectory.

As Sinsaenum took the stage, the sound sample Emptiness filled the room. The crowd finally came to life and surged forward, and the cheers rang out as each member walked on individually. The band began their sonic assault on the senses with “Repulsion For Humanity” from 2018 album of the same name and backed it up with the skull-crushing “Sacred Martyr”.

In a band featuring the likes of Joey Jordison and Frederic Leclercq, it might be easy to be overshadowed, but each member of Sinsaenum is an accomplished musician in their own right, and each of them delivered tonight. Guitarist Stephane Buriez also shredded, and bassist Heimoth combined with Joey to provide a rock-solid foundation of rhythmic propulsion. On top of that, vocalist Sean Zatorsky absolutely owned it. All five members combining to form an army of chaos! The punters up the front responded with moshing, circle pits, raised fists and devil horns.

Despite being labelled a death metal band, the slower track “I Stand Alone” was an absolute highlight. Some of their groovier songs such as “Gods Of Hell” and “Army Of Chaos” were also well received. Sean Z had the crowd screaming “CRUSH” at his command during “Final Resolve”, and their cover of the Melvins classic “Hooch” pleased many fans as well. “Ashes”, from the EP of the same name, also had some serious crowd participation, as did the encore “My Swan Song”.

Even though the band Sinsaenum is a relatively young beast, its members are all seasoned veterans who know how to put on a great show. Despite the slightly underwhelming attendance, the guys played with heart and soul. There was great chemistry on display from the group, with plenty of stage movement. The intensity of their studio sound magnified and energised in their live performance. Dark, unrelenting and unstoppable, Sinsaenum could never be labelled as a mere side project. They are the real deal, and they mean business!