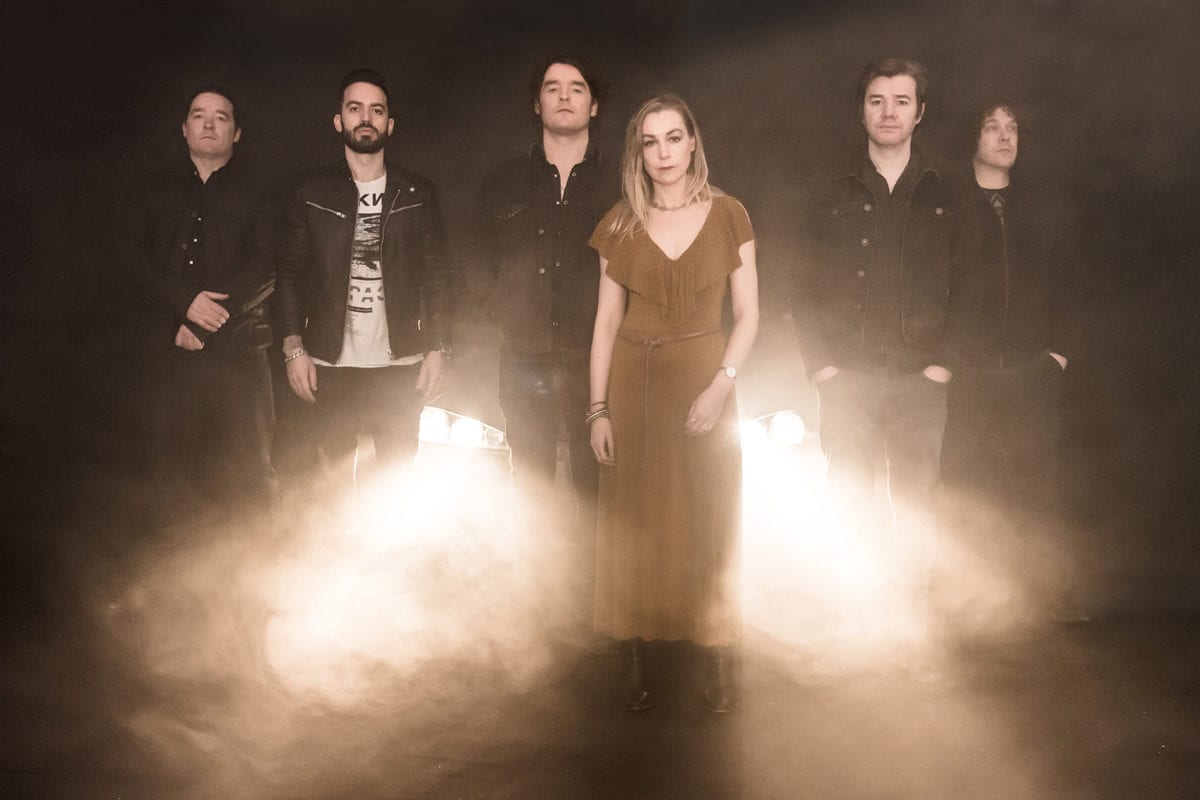 The year of 2017 has undoubtedly been a successful one for stargazing, post-progressive rockers Anathema, and they aren’t planning on slowing down anytime soon.  “The shows we are currently doing have been the biggest ever”, says Jamie Cavanagh (bass).

Anathema have been touring extensively from the beginning of June, in support of their highly anticipated 11th studio album, The Optimist. “It’s all going really well, better than I expected. You know, I keep my expectations on a realistic level, so that I don’t get disappointed in any way… And it seems that everybody’s loving it. It really has been a great response”, says Cavanagh. “The two songs we made videos for, ‘Springfield’ and ‘Can’t Let Go’ have definitely been audience favourites at the moment”.

The Optimist can be perceived as a sequel to the band’s 2001 record, A Fine Day to Exit. The band has indeed succeeded in the way they have skillfully tied the two albums in together. The opening track, ‘32.63n 117.14w’ are the coordinates for Silver Strand Beach in San Diego, the exact location of where the photograph was taken for the front cover of A Fine Day to Exit. Cavanagh explains while the songs on both albums are different lyrically, the narrative remains the same. “The songs are written about personal experiences, but just keeping the narrative that we had come up with in check as well. We just tried to tie the two together in a nice way, because it was definitely the case that we wanted to continue on with whatever happened to “that guy” after A Fine Day to Exit. Originally, that album was overlooked and everybody loves it now”, he laughs.

Anathema made the decision to return to working with San Diego based artist Travis Smith, who is known for his work with the likes of Opeth, Katatonia, Riverside and many more – not to mention his work on some of the band’s previous albums. “We had the (visual) ideas ourselves and Travis brought them to reality in a great way. He did the same thing with A Fine Day to Exit, so it was just perfect that he could do this one as well”.  The meticulous work of Smith has encapsulated the journey that the “Optimist” himself is undertaking, in a way that it immerses the listener through all of the ascents and descents that this journey has to offer. It can be said that the band wanted to attempt to place the listener in the seat of the Optimist’s car, as he travels through notable places such as San Francisco – another visual which can also be seen inside of the artwork booklet. “It certainly is a journey”, explains Cavanagh. “All of those effects, all of the extra bits and pieces were certainly on purpose.”

Cavanagh talked through how the band decided to work with producer Tony Doogan of Castle of Doom Studios in Glasgow after the band discovered that he was a fan of their music. “I think that our management heard that he was really into the music and was interested in working with us. The moment that we found out he was interested in our work, we tried to do everything we could to secure his services because the guy is just incredible. He’s a powerhouse, a driving force. He really brought a lot to the table, and he managed to bring our ideas to fruition first and foremost”, describes Cavanagh.

The production of The Optimist as a whole is exceptional, in which they recorded the entire record as a live band, rather than producing individual tracks. Cavanagh laughs as he talks through the finicky details of working with Doogan. “He’s a real headmaster, you know? If you’re not there on time in the morning, he doesn’t like that! You have to be on time and you have to be ready. If everything is ready, he is very encouraging. He really kicks ass, and that’s what you need”.

With the Australian national tour fast approaching, Cavanagh says that the band have an extremely busy schedule ahead of them over the next twelve months. “There’s going to be a US tour, a cruise, a European tour and then the Summer Festival season will be coming up.”

Cavanagh discusses what fans can expect from Anathema’s upcoming live shows, without giving too much away. “It’s going to be a long set, comprised of a lot of stuff. A lot of new stuff. If we decide to base it around this current European set, it’s going to be based on some A Fine Day to Exit concepts and some of The Optimist concepts. Some things that people have definitely never heard before in Australia.”

When questioned about the idea of ever playing “The Optimist” in full, Cavanagh highlights that he would love to, but at the same time they run the risk of potentially losing the interest of the audience. “We have to watch out for people’s attention spans, especially in this modern era with mobile phones and things like that. What if somebody doesn’t dig the new album and they’re waiting for something old and have to wait around for 55 minutes? You have to mix things up. From the band’s perspective, it’s nice to do a concept performance and play a continuous piece of music for 55 minutes. But from a fan’s perspective, they’re the ones buying the tickets”.

After the huge success of their previous two Australian tours, Cavanagh talks through how the band can now step out of their comfort zone and try some new things for the Australian fans. “With the previous two times, you’ve got to play songs from Judgement and play stuff from all of your material because you’ve never been there before, right? So this time around, because we have played there twice, we can afford to try and do a few other things. It’s definitely going to be a very visual show. The best set-list we have ever picked in my opinion. I love it”.

Anathema returns to Australia this December to celebrate the release of their highly anticipated 11th album The Optimist, bringing their full electric show to our shores. 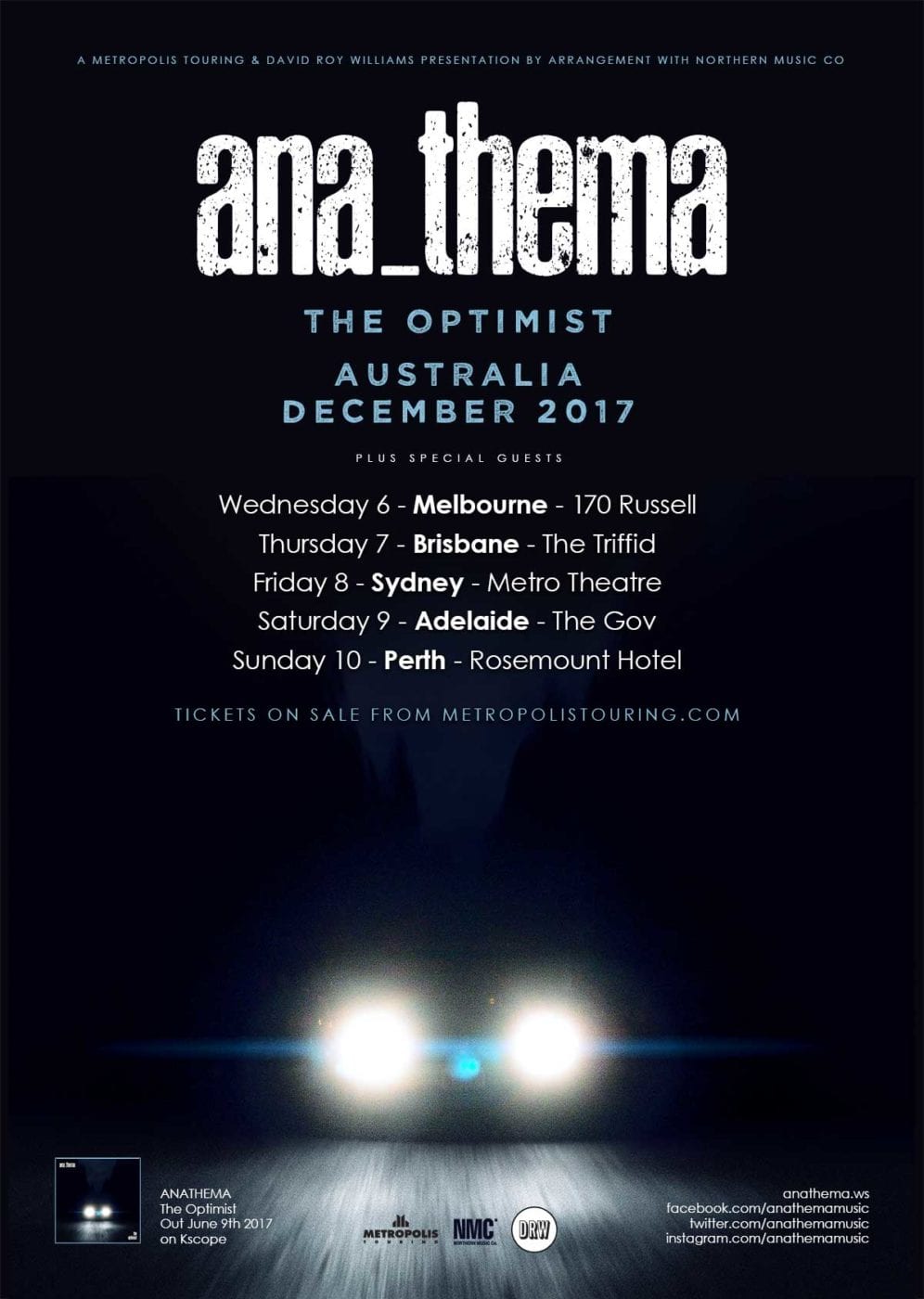 PrevPrevious.Time To Get Know Kings Within
Next.Interview with BEN AFFLECK & GAL GADOT on Justice LeagueNext