We Were Sharks Release Video And Announce Tour 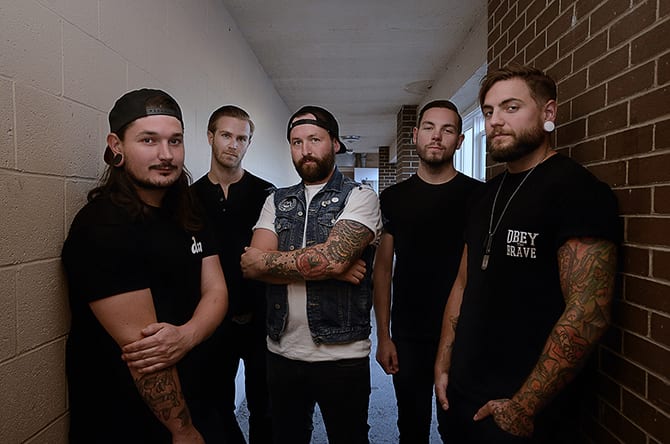 Victory Records is proud to announce the addition of dynamic punk ensemble WE WERE SHARKS to the labels ever growing roster. With the debut premiere of their brand new video “Beyond Repair,” the Canadian six-piece powerhouse hits the road tonight ready to douse crowds with material from their new album, Lost Touch, set for release on February 23, 2018.

Straight out of the nation’s capital city Ottawa, WE WERE SHARKS are set to continue wielding their full-force of punk and alternative music. Fronted by vocalist Randy Frobel, drummer Will Plummer and bassist Steve Creaturo, WE WERE SHARKS is rounded out by the hat trick attack of guitarists Jason Mooney, Josh King and Colin Jacques.

Even though these boys already have a lot of mileage under their belts, their journey is far from accomplished. WE WERE SHARKS self-released their debut LP, Highways, in 2012 and the band started gaining national notoriety and laid the foundation of a loyal fan base. The band hooked up with Panic State Records to release 2015’s Not A Chance EP to extensive critical acclaim. Since then, the band has shared the stage with peers such as State Champs, The Wonder Years, Beartooth, Andrew W.K. and many others. At this point with their streams reaching over 2 million, it became apparent WE WERE SHARKS needed serious label support. Victory Records signed the band in 2017 and will release the band’s new album Lost Touch, which was produced by Silverstein guitarist Paul Marc Rousseau, and features guest vocals from Broadside frontman Ollie Baxxter.

On ‘Beyond Repair,’ vocalist Randy Frobel explains it is based on toxic relationships and the ugly reality it can produce. “Sometimes we can be blind to the fact that there is a person that you are not meant to be with. You both try so hard to make it work, but sometimes you have to face reality and learn that you’re not meant to be together. That you’re more in love with the company than you are with the person.”

The boyant side of the band is “thrilled to bring the sweat and hijinks to the stage again!” cracks Mooney. WE WERE SHARKS support A Wilhelm Scream’s 10 Year Career Suicide Tour kicking off tonight at Brooklyn’s famed St. Vitus, continuing down South and ending in Atlanta on October 25. A few weeks later on November 26 in North Carolina, WE WERE SHARKS will join label mates Broadside, Carousel Kings and For The Win for another North American run. “We’re gonna add some new songs to the set list and we’re excited to have the opportunity to see how they go over with our fans and new crowds. For those who are fans of Not A Chance, don’t worry, we’re still bringing the goods from that album,” Mooney promises. “We love how those songs go over live and because they’re basically muscle memory to us, we get to have a lot of fun playing them.”

Pre-orders for the album are available in physical and digital formats, and include an instant download of “Beyond Repair.”

WE WERE SHARKS ON TOUR

With A Wilhelm Scream

With Broadside, Carousel Kings, For The Win