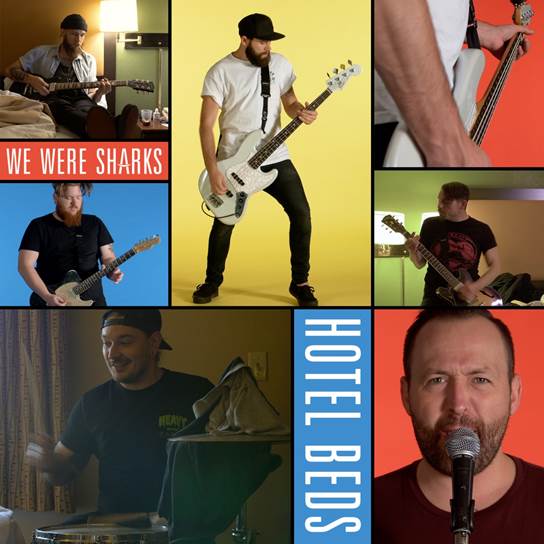 We Were Sharks Bring Us Hotel Beds

WE WERE SHARKS is proving once again that pop-punk is not dead with the colorful premiere of their new music video “Hotel Beds.” Just weeks away from the release of their upcoming album Lost Touch, these tenacious Canadians hit the road starting February 2, marking their third tour since signing to Victory Records. Lost Touch will be available everywhere on February 23, 2018.

The six-piece recently shook things up with release of the video “Ashley,” a gushy love song about the bad girl that is always on your mind. “Hotel Beds” is the antithesis, as vocalist Randy Frobel explains, “This is more like an anti-love song about that one person who has you wrapped around their finger, as the lyric goes.” Guitarist Colin Jacques concurs, “This song has an anxiousness to it. It’s about that one person who truly has a hold on you. Every song you hear seems to be about them. Every notification on your phone could be them. Every bit of you is drawn to that person, and you just can’t shake them out of your head.”

To keep their new tunes shaking in your head, WE WERE SHARKS embark on their third tour behind the upcoming album Lost Touch. The band closed out 2017 touring with A Wilhelm Scream and label mates Carousel Kings. They keep the wheels rolling with help from Belmont, Boys Of Fall and Sink The Ship before closing out with a trio of headlining shows in their native Canada. “We’re excited to be back in the USA playing with some awesome bands in great towns,” exclaims Frobel. “Make sure to come out to a show if we are reaching your area to get a sneak peek at new songs from Lost Touch!”

Pre-orders are available in physical and digital formats and include an instant download of “Ashley,” “Beyond Repair,” “Hotel Beds,” and “Stay.”