SEVENDUST and REDHOOK at The Forum, Melbourne on 27/4/19 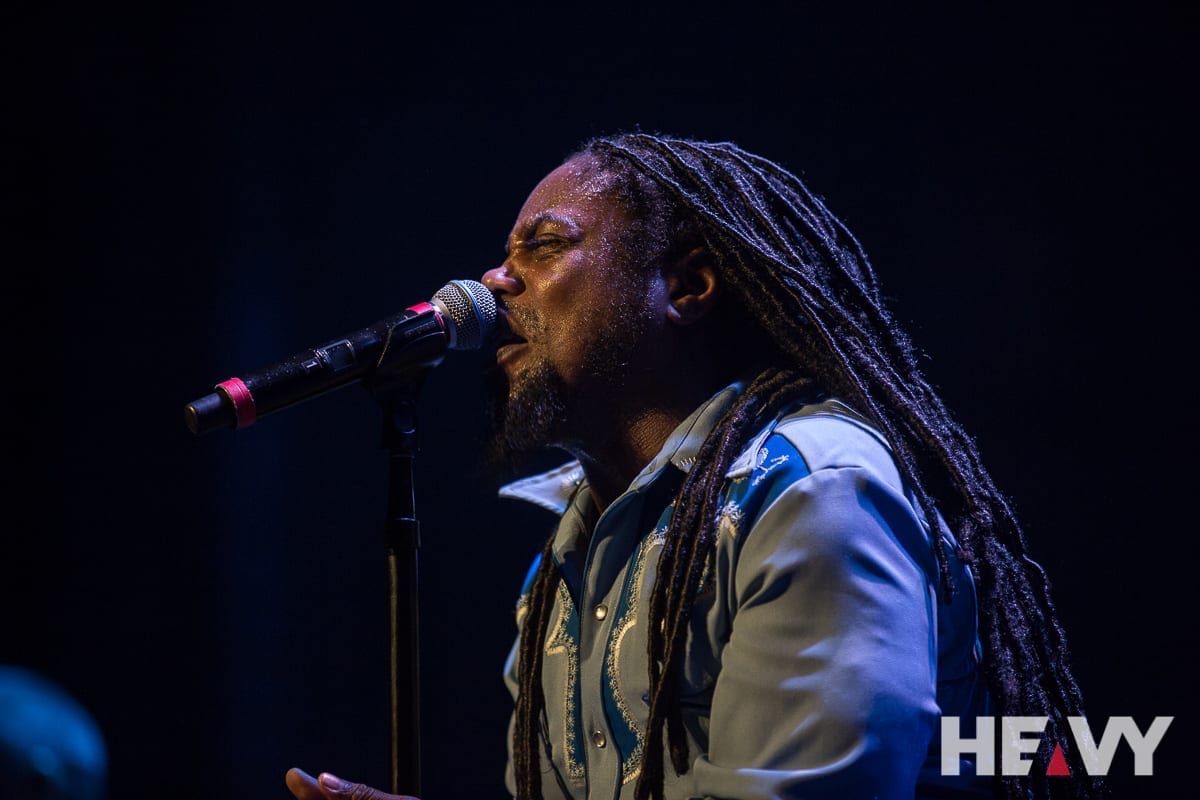 RedHook vocalist Emmy Mack traversed the stage intent on lifting the formerly placid vibe with her engaging rock chick charm. The result is a band and frontwoman who are evidently capable of opening for the eagerly awaited Sevendust. Initially, the mass of Sevendust fans on the floor up front appears to be quietly consuming RedHook’s mostly unfamiliar songs. This was until Emmy introduced a song that she’s adamant this crowd would appreciate. Shortly after, the familiar riff and scream “Turn that shit up!” became a captivating cover of Rage Against the Machine’s ‘Guerilla Radio’

Emmy appears to be in her element on stage, comfortably and successfully warming up the populated but mostly pacified punters. She voices her gratitude between RedHook’s upbeat alt-rock singles ‘Paralysed’, ‘Minute on Fire’ and ‘Turn Up the Stereotype’, adding that “the Sevendust guys are the most beautiful people, and musicians.” One of RedHook’s most popular songs ‘Turn Up the Stereotype’ stands out, injecting high energy as Emmy’s fist pumps towards the end of their set. It’s no surprise that this relatively fresh band have been added to the UK Download Festival as well as supporting prominent established bands such as Sevendust.

The intermission music playlist includes the appropriately entertaining and upbeat AC/DC song ‘Shoot to Thrill’. The scene has been set and Sevendust takes the stage, with vocalist Lajon Witherspoon announcing “All I see is war” to a round of applause and their first single off All I See Is War (2018) titled ‘Dirty’ begins.   The tempo increases, as Lajon shouts “we can’t hear you Melbourne, let me see your hands in the air!” Hundreds of Sevendust’s loyal upfront fans simultaneously put their hands up at the request of the charismatic Lajon.

A circle pit is propelled into motion via Lajon’s insistence, the way a veteran rock band frontman can only do . Early on in their set, Lajon announces that “we’d like to go back in time”, and subsequently ‘Reconnect’ from the album Home (1999) packs a powerful punch. Lajon eyes the back half of the crowd, noticeably less involved, so he shouts “let me see ya hands in the back. make some noise!” This was an oft-repeated phrase throughout most of the set, with the front half of the crowd quickly and obediently reacting to Lajon’s requests.

A dense sea of fans up front are lit up by lights before ‘Praise’ is played. Lajon takes every opportunity to encourage and rev up all in attendance. Although Sevendust have spanned more than 20 years of touring and performing, it’s apparent that they are still at their zenith. Lajon echoes the thoughts of most people who attend live gigs at The Forum, ” I can’t believe we have such a beautiful venue. Everyone looks beautiful. This is amazing.“

Further on, ‘Denial’ is smashed out to a rapturous response, while ‘Bitch’ starts off with a lull then branches off into a heavy rock onslaught.  The lull then returns and Lajon ensures his role as Sevendust’s frontman is to both emote the lyrics and lift the energy. By their seventh song, Sevendust undoubtedly and evidently had the energy at The Forum permanently elevated.

Lajon warms the hearts of many when he says “we don’t have concerts; we have family reunions” and thereafter ‘Waffle’ goes off like a sonic firecracker. During the pacified space before ‘Enemy’, Lajon emotes “Melbourne, thank you for making me smile tonight”. ‘Enemy’ is the pinnacle of their set, with loyal Sevendust fans bouncing up and down with excitement. The tone is brought down with ‘Angels Son’ after Lajon excitedly states that he wants to move to Australia. This song has many fans singing along and recording with phones for what seems like the first time. As this gem ends, the crowd response is highly elated applause along with whistles and claps.

‘Shine’ succeeds in getting everyone enthusiastic and involved, as Sevendust save the outro of their set for several of their most uplifting crowd favourites. As ‘Shine’ concludes, a guitar riff reminiscent of AC/DC’s Thunderstruck is played, as if to signal the inevitable encore to follow. The band exit the stage and are quickly clapped back on. Very few people left, as it was obvious that Sevendust were going to keep the vibe they had created. Lajon gives thanks with an exuberant “Melbourne Australia, God bless each and every one of you!” This is followed up with Lajon shouting ” Sevendust has arrived. Sing it!” This encore included fan favourites‘ Black’ and ‘Face to Face’, with both songs inebriating the mosh floor with a performance that longtime Sevendust fans have come to expect from such a powerhouse band.