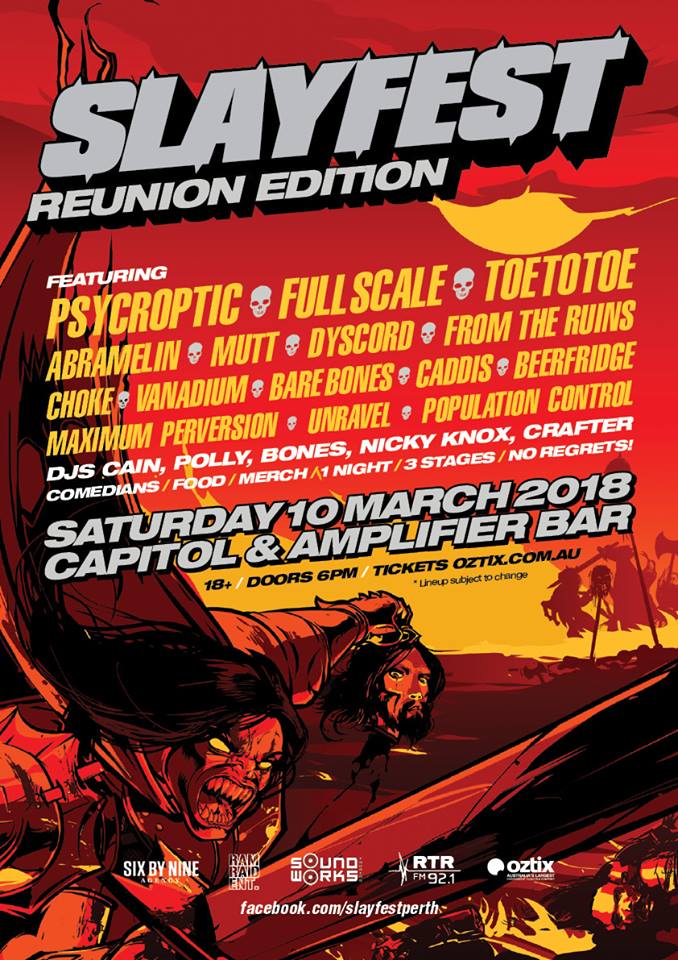 On 9 March 2007, the multi-stage indoor festival SLAYFEST was presented at a packed out Capitol & Amplifier Bar in Perth to showcase Australian live acts in the genres of metal, rock and hardcore.
In 2018, in what will be 11 years on almost to the day, SLAYFEST comes out of hibernation to celebrate with an almighty “REUNION” starring a hand-picked selection of the best Australian heavy acts from yesteryear and today, in one huge night of reformation and flashback fury at the place it all started…… Capitol and Amplifier in Perth WA.
Joining the already announced huge all Aussie line-up of PSYCROPTIC, FULL SCALE, ABRAMELIN, MUTT. FROM THE RUINS, CHOKE, CADDIS, BEERFRIDGE, UNRAVEL will be
TOE TO TOE:
Toe to Toe mean a lot to the Australian hardcore punk community. A soundtrack for outsiders and outcasts since 1992 – the band spearheaded the rebirth of Sydney hardcore and inspired countless bands with their no frills, uncompromising passion and intensity. 7 EP’s, 4 LP’s, a couple ofsplits, compilation appearances and various other releases in, the band are as revered and relevant as ever, following the recent unleashing of the latest LP, Rise Up.
<https://web.facebook.com/tttshc> https://web.facebook.com/tttshc
DYSCORD:
From 2002 to 2011, Perth’s Dyscord made their presence known in the Australian metal scene through ferocious live shows and a tireless work ethic resulting in national tours with Whitechapel, The Black Dahlia Murder, God Forbid, Psycroptic, and Daysend plus numerous international supports. In 2018, Dyscord will return to the stage for one night, playing songs from all 3 releases. Their trademark frenetic live show will be presented in full force, and the 7-year gap between drinks ensures that this will be a very special night to remember.
VANADIUM:
Vanadium were the Southern Suburb Thrash Force from Westerrn Australia from 1993 until 1997. Look out, more than 20 years later there’s movement, as they return to the fold in 2018 for Slayfest
<https://web.facebook.com/vanadiumbc> https://web.facebook.com/vanadiumbc
BARE BONES:
Since their formation in 2013, Sydney’s Bare Bones have been all party and recklessness, a suspenseful maelstrom of off-kilter guitars and razor sharp vocals.  Recently Bare Bones joined the ranks of iconic heavy label Resist Records, Bare Bones released the long awaited debut full length record, ‘Bad Habits’, a natural progression from their previous  two EP releases ‘Villians’ and ‘Cut Throat Living’, and have gone on to hold their own on-stage supporting the likes of The Bronx, Stonesour, Every Time I Die to Northlane, Black Label Society and Cancer Bats.
We welcome Bare Bones to WA for the first time at Slayfest.
<https://web.facebook.com/barebonesofficial/>
https://web.facebook.com/barebonesofficial/
MAXIMUM PERVERSION:
This Perth four piece band embodies extremities in music coupled with deviant interpretations of the macabre and distasteful world in which we live… returning from the abyss for Slayfest
<https://web.facebook.com/MaximumPerversion/>
https://web.facebook.com/MaximumPerversion/
POPULATION CONTROL:
Blurring the genre lines and borrowing from Grind, Death, Crust, Punk & Hardcore.  Population Control join Unravel to represent Perth’s rising next gen at Slayfest.
<http://www.facebook.com/PopulationControlGrindSyndicate>
www.facebook.com/PopulationControlGrindSyndicate
plus
DJ’S CAIN – POLLY & BONES – NICKY KNOX & CRAFTER fire up the sounds behind the decks across all 3 stages.
Brewing up the good vibes in the Amplifier beer garden will be band merch, food stand and sets from comedians
Slayfest brings it all back in 2018
SLAYFEST
“REUNION EDITION”
starring
PSYCROPTIC – FULL SCALE  – TOE TO TOE
ABRAMELIN – MUTT – DYSCORD – FROM THE RUINS
CHOKE – VANADIUM – BARE BONES –  CADDIS – BEERFRIDGE
MAXIMUM PERVERSION – UNRAVEL – POPULATION CONTROL
+ DJ’S CAIN – POLLY & BONES – NICKY KNOX & CRAFTER
+ BAND MERCH – FOOD – COMEDIANS – GOOD VIBES
SATURDAY 10 MARCH 2018
CAPITOL & AMPLIFIER, PERTH (18+)
1 NIGHT – 3 STAGES – NO REGRETS
Doors Open 6pm. Tickets $39.90 from Oztix
<http://tickets.oztix.com.au/?Event=81627>
TICKETS ON SALE NOW
Presented by Ram-Raid Entertainment, Soundworks Touring & RTRFM 92.1
For full event information and updates visit:
<http://www.facebook.com/slayfestperth> www.facebook.com/slayfestperth