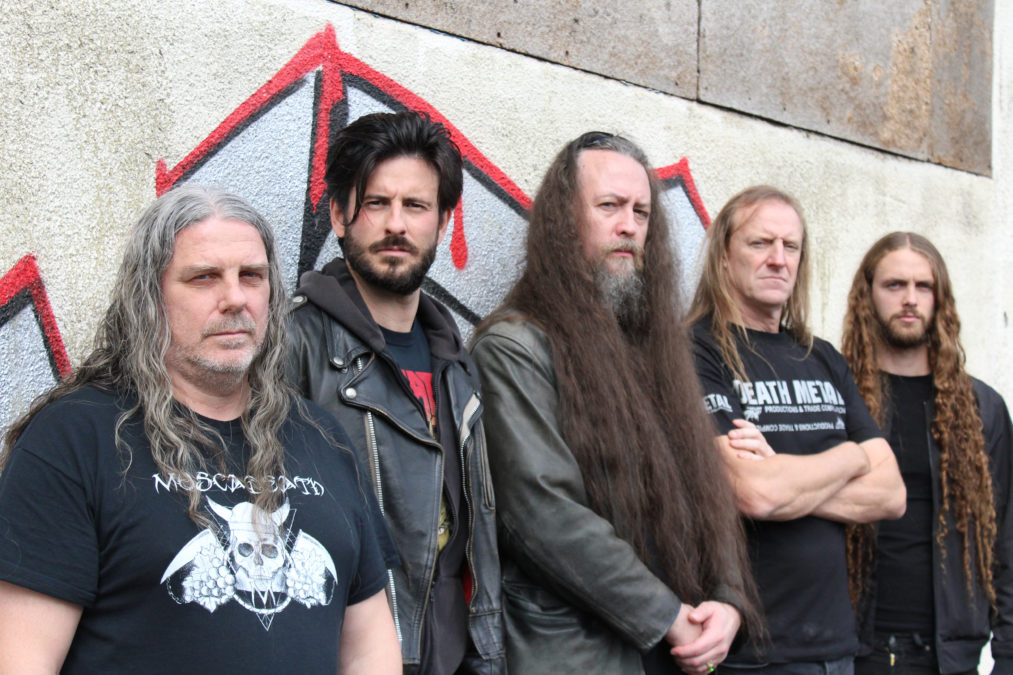 Benediction are your straight up, no bullshit death metal. To semi-phrase guitarist Daz Brooks himself – “verse, chorus, verse, chorus, solo, in, out…song’s done!”

Formed in Birmingham in 1989 by Daz Brooks on guitar, Peter “Rewy” Rewinski also on guitar, Ian Treacy on drums and Paul Adams on bass  –  and one Barney Greenway on vocals – Benediction quickly found themselves in the upper echelons of the respected and admired extreme music community thanks to solid slabs of unrelenting early 90’s brutality the likes of Subconscious Terror [1991], The Grand Leveller [1991], and the now revered Transcend The Rubicon [1993].

Whilst Greenway was the initial vocalist, it was the replacement of him with the addition of Dave Ingram that the band truly rose from the proverbial ashes. Finding their feet with the first three albums it was in 1995 that Benediction dropped a bomb on the listening world with the all killer, no filler classic The Dreams You Dread. Start to finish this album just crushed; followed by the equally menacing Grind Bastard in 1998. Following Ingrams departure from Benediction to join Bolt Thrower as new vocalist Dave Hunt of Anaal Nathrakh stepped in to fill those massive steel caps.

With all the finer points out of the way…fast forward to 2019 and a new Benediction album Scriptures is written just needing a little finesse shall we say! Hunt has left the band to focus on his personal life and Ingram was the logical phone call to make to ask if he’d like to rejoin the band.

Daz picks up the tale: “Basically we just found we’d had enough time kicking around doing what we were doing over the last ten years,” he said. “We decided to get the album together because it became apparent that Dave Hunt was not gonna have the time it takes to promote the album, the touring and god knows what else….we had a couple of gigs [left] to do and I went over to Rewy’s house just sitting in his kitchen and asked ‘Well what are we gonna do? Are we gonna search for a new vocalist or go old school?’ I just suggested that I might give Dave Ingram a ring and see if he wants to do a proper goodbye. ‘Cos when he left in ‘98 he kind of left overnight so this was a way of us saying you can settle things with the Benediction faithful once more and finally sign yourself back up!”

The both of them were chuffed at the proposition of a reunion, with Daz proudly proclaiming “Within a couple of minutes of the conversation you could hear how excited he (Ingram) was on the other end of the phone. So by the time I’d finished the phone call, I’d not only asked him to finish the gigs but I was sending him demo’s of the new album and asking him to put lyrics to it so it was actually quite a quick process!”

After a twelve year gap between albums  Killing Music and Scriptures the overall sonic experience is quite vast and noticeable, meaning Scriptures is a killer release. Metal V ask Brooks to step out of his Benediction skin and look at the album as a fan of all brands of extreme music and asks him how he feels about the album and acknowledging how proud he should be of what he and his band mates have created.

“Absolutely yeah!” he enthused. “You can tell from what you hear that we have never strayed from the path. When the death metal scene was dying on it arse in the late 90’s early 2000’s, Benediction was one of those bands that didn’t cave or give in. Plus we were also one of those bands that didn’t change their style to suit the media or suit the record label. We were often asked to put a keyboard on there, or a female singer or tons of blastbeats. And you know what? That ain’t Benediction we stuck to what we started out to be and that’s what we still believe and that’s why we carry on and get gigs everyday!”

With such a massive space between Benediction’s last two albums, the question had to be asked as to why there was over a decade between releases.

“There are various reasons really,” Brooks measured, “but the main reason was line-up changes. We’d really struggled to replace Neil (Hutton – drums, 1994–2005, 2007–2013, 2019). We’d gone through various drummers, but there was no 100% commitment and you’ve got to fit in the band. It’s not just about playing drums but you’ve got to be able to hang with the band so that was difficult until we found Gio. Then there was the case that Rewy no longer lives in Birmingham so that makes my writing difficult because he’s my writing partner.”

Getting into the real crux of the burning point, Brooks adds unapologetically, “There’s the fact that unfortunately for us Benediction doesn’t pay the bills! I’d love it to Man, I would love to make this my only job but that’s impossible. So we have to concentrate on our day jobs as well because now we’ve got families and mortgages and kids. You know you’ve got shit to pay for so all of this and dealing with the band is difficult. Then you put into the mix over the last ten years or so, promoters when they’re booking gigs just want to hear the old stuff and want us to play our old albums in their entirety which we refused to do but we do set up our set with loads of old classics. So really there was no real drive. You got line-up changes, time difficulties, home responsibility, Rewy moving away, promoters wanting old stuff so there’s no real drive!”

To round out the “forgettable” part of Benediction’s existence closing out here Daz reminisces, “…a couple of years ago me and Rewy were just sitting in a pub funnily enough and decided that we’d had enough of doing the same stuff. We wanted to do a new album and we’re itching to do a new album. We’d had a mountain of stuff to get off our chests!”

To hear more about the writing process of Benediction’s first release in over a decade and many other wide and varied topics such as the track that Daz feels sums up the band appropriately and filming the two current released tracks off of Scriptures which is out October 16 via Nuclear Blast Records.

You can hear the full interview above \m/   \m/