This week many Australians were privileged to finally be able to see legendary Europe hit our stages for the first time and in just a few months, November to be precise, many of us will again get to see a classic rock band for the first time live. German hard rock outfit Scorpions need very little introduction – songs like Winds Of Change are etched in the minds of any true rock fan, but like Europe, Scorpions have only visited Australia once… and that was to only one city, Melbourne.

Well in November Scorpions hit Australia, alongside their good friends Def Leppard for a full Australian tour and HEAVY Mag recently caught up with the man himself, Klaus Meine to find out what fans can expect on this tour.

“We are very excited about this,” says Meine who is full of energy when we chat. “I mean to play the Palais Theatre in Melbourne was just the first step into the right direction so when this opportunity came up to do a national tour, being special guests of Def Leppard, we thought this is a great way to do so and visit the country. It gives a chance to have a bigger audience than playing theatres and doing the big arenas. This was a great opportunity and we are very excited about being to come back and for the very first time being able to go right around Australia. We want to see the country and go to places that we have never been to before, like Perth, Adelaide or Brisbane, it’s fantastic after all these years to get the opportunity to travel all over the country. We also want to meet with our fans in Australia because they must have been waiting for a long, long time. It’s a chance to rock them out and give them a taste of what Scorpions are all about.”

The friendship between Scorpions and Def Leppard also goes back a lot further than a lot of people realise. “This with Def Leappard started when they were young when they toured America for the first time actually. Their management back then puts them on a tour opening up for The Scorpions in America in the early ‘80s, this was before they broke the big time. So we know the from way, way back in the early days and we’ve also shared the stage a few times at festivals since then, but we haven’t done a tour together since the early days, so this goes right back to the early ‘80s and yeah we are really excited about it. Back then they opened up for us and now we are special guests for them in Australia

Scorpions hit Australia with Def Leppard in November and tickets can be purchased right here. You can also listen to the full interview above. 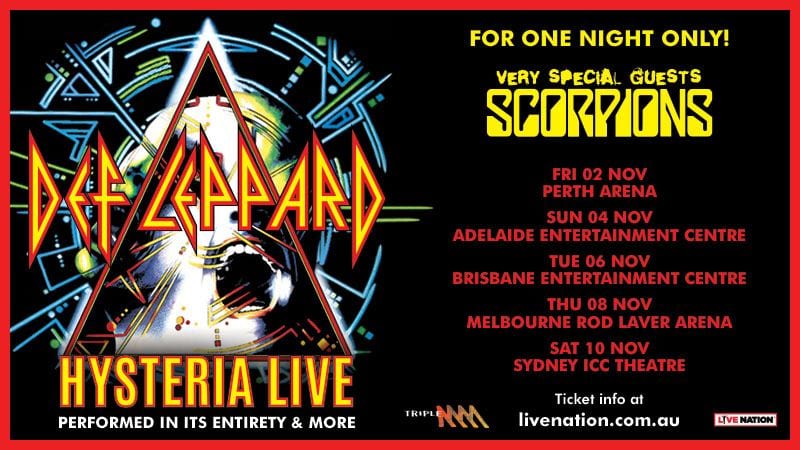