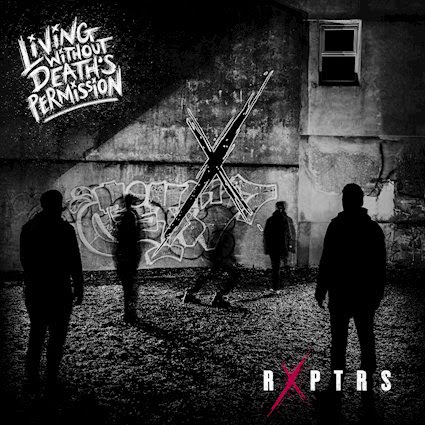 Music these days is becoming increasingly formulaic and predictable, with many bands making token gestures to “push the boundaries” without ever straying too far from their comfort zone.

Much of the danger and mystique has gone out of the industry, but every so often a band will spring from the fold and demand attention by virtue of sonic intensity alone.

UK outfit RXPTRS are one of those bands, mixing rock, metal, punk and hardcore in irregular intervals, throwing the rule book completely out of the window several times during each song.

From the moment their single Gutterflies landed on the HEAVY desk, I was hooked, desperately hunting down any track put out by the band while waiting for their album Living Without Death’s Permission to hit my inbox.

And hit the fucker it has!

Opening with Burning Pages, RXPTRS throw you straight into the chaos, a mass of swirling guitars breaking the silence before vocalist Simon Roach puts his first of what will inevitably be many stamps on the album.

In one song already, RXPTRS have traversed the metal genre, drifting from clean to harsh vocals that soar as often as they crush.

The music is frenetic and aggressive, timing and tempo changes throwing sonic confusion into the mix as well.

Ian Chadderton and Harley Watson face off against the world on guitar, menacing with every note but never threatening to overpower the structure – or seeming lack of it – that defines RXPTRS’ sound.

Rock Bottom (Is A Stepping Stone) kicks in, punk limbs flailing in an attempt to keep up with the eclectic nature of the music.

The chorus in this has a massive hook, while the guitar riffs threaten to stick in your mind long after the track finishes. A rapidly spat vocal interlude adds yet another dimension to proceedings but just when you start to settle into a routine RXPTRS change tact once more and the almost radio friendly chorus once more forces its way into your thoughts.

A wicked breakdown three quarters through sends things off in another direction before a tirade of drums leads into a softer section that really shouldn’t fit but somehow does.

Dead Awake (Pretty As The Drugs We Take) breathes life with an almost ethereal feel, a sweeping yet still tough as fuck number that soon descends into chaos as Roach screams “All My Friends Are Dead” which seems to be a call to arms as the rest of the band take up battle stations with their leader.

This track ebbs and flows with equal parts ferocity and calm, the contrasting emotions matching the obviously sensitive subject matter.

Single Demons In My Headphones is up next, and, as per usual, you are going to have to check this out yourself or listen above to make up your own mind.

An angry spoken word intro calls in Collapse before Roach runs through his vocal range several times – all in the first thirty seconds!

Because this is another single, you know what to do…

The song that started it all for me, Gutterflies, is up next and if this is your first introduction to RXPTRS then I suggest you start here!

The Death Rattle sounds ominous and doesn’t disappoint, an almost jazz like intro that has all of the swagger of a smokey Motown Club from the 1960s. Of course, that doesn’t last as the song kicks into more of a faster paced rockabilly number that adds yet another string to the long bow of RXPTRS.

Mat Capper on drums is on point throughout, the occasional guitar licks keeping things moving as bass player Sam Leworthy lays down the groove.

Gang vocals pierce the calmer moments, with a variety of voices on hand to lend in the (in)stability.

This is possibly the most eclectic track on the album so far, which is definitely saying something!

Cold Ground throws another curveball with its 1980s themed intro that is shattered by rapid fire drum rolls before pulling back into what must be the token ballad.

Roach proves here that he can sing, and sing quite well, the entire band showing a restraint not evident before this number. It is strangely comforting, a brief respite from the chaotic madness of the tracks that came before.

I have never really been a fan of the slower songs, and although this one isn’t too bad in the overall scheme of things it has served is purpose, so I shall move on.

The Frail is exactly how I am feeling as the music glides to life on the back of great guitar play. Roach immediately puts his indelible mark on the song with an urgency that is both tempered and urgent at the same time.

It is a sporadic song that moves between light and shade without ever dropping an underlying tone of tension. Even through the quieter moments, I find myself preparing for the inevitable carnage that must surely follow, but RXPTRS don’t give a fuck what I think.

Instead, they slow things down considerably, which only serves to highlight the musical talent at their disposal.

All good things must come to an end, and what better way than with a plea to Let Me Die How I Want.

This track eases in gently once more and is even more ballady than Cold Ground.

Three in a row is surely too much for any person, let alone someone like myself who finds himself nodding off without excitement at regular intervals.

I have to admit it is a broodingly beautiful track, but definitely not the way I would choose to go out should someone honour my wish to Let Me Die How I Want.

But I suppose going out on a bed of roses is better than a hail of bullets?

All in all a great album and one which should satisfy you no matter what genre you listen to.

Give it a crack, what have you got to lose?

PrevPrevious.Cleansing The Air With THE SOAPGIRLS
Next.CIVIL WAR On The Edge Of Oblivion With New TrackNext