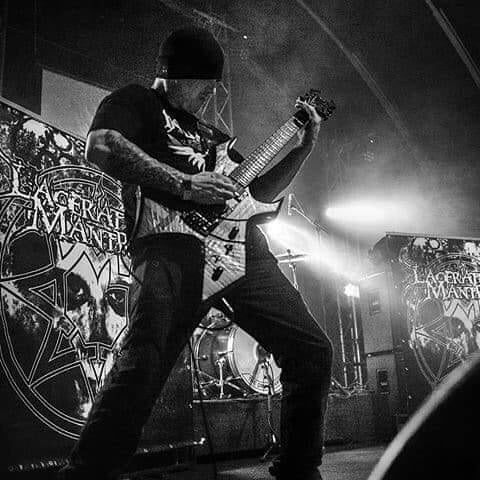 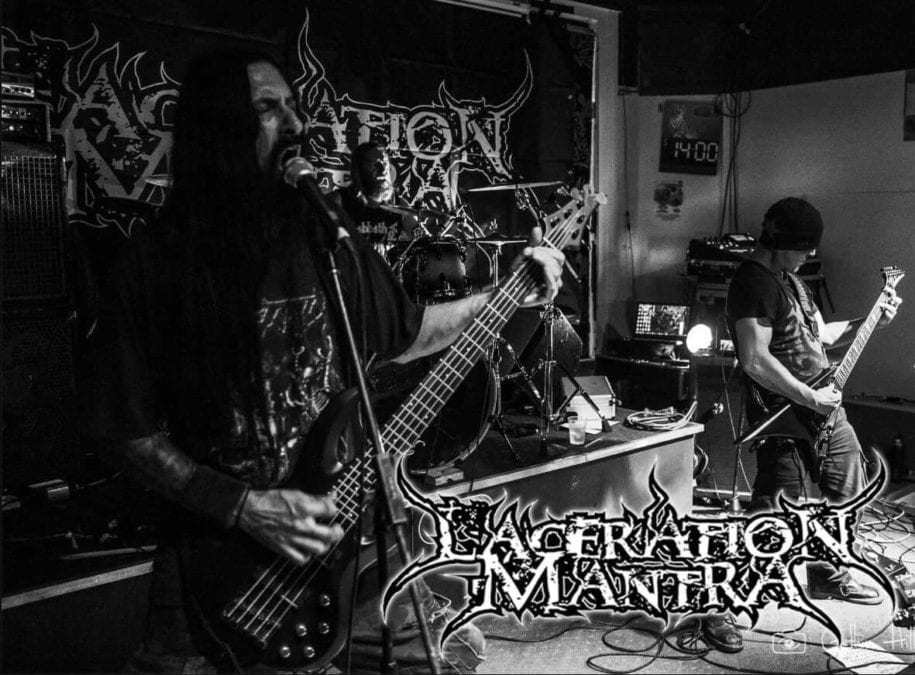 Hailing from Brisbane Australia is a brutal trio creating blackened death metal. They are Laceration Mantra, formed in 2008 and with two full length studio albums under their belts and a third album well underway, Rob Rieff Tells me all about the band’s commencement, and the struggles they needed to overcome to get this savagery off the ground.

“Our biggest problem early on was finding a drummer. The first demos were written with computer drums. A painstaking process that took a very long time. We auditioned 20 drummers and none of them were close. Scott had joined the band by this point and suggested we give the tracks to Anthony as he was between bands at the time. Well, that was that problem solved. Anthony added more than what we wanted”.

11 years in the metal industry is impressive. What is Laceration Mantra’s secret to staying strong as a band and surviving within the Australian metal industry?

“First and foremost, getting on with one another. Having the same vision of what we want the band to be and backing each other’s ideas”.

There is a great death metal scene up in your neck of the woods. Has it always been this strong in Queensland/Brisbane? Or is this a purple patch now? And why?

“It’s been consistent over the years. We’ve been lucky enough to always have a few different venues that are willing to put on metal gigs and a few die-hard metalheads willing to run metal events in Brisbane. Without these guys, the scene will die very quickly. It takes a lot of organising and running around to keep shows happening regularly, I take my hat off to these guys”.

Laceration Mantra is a solid mix of blackened death metal. Were you always mixing these two sub-genres? Or has your band progressed into this? And If so why?

“Initially, we were a little more of a death/grind band as is evident on the first album Prolonging The Pain. We made a conscious decision when writing for Infested to focus more on the death metal elements and the darkness emerged from within during the writing process. We will continue in a similar vein on the next album”.

Your latest album Infested is a frenzy of uncompromising and intensely dark blackened death metal. What is this album all about?

“The album focuses on the evil within the human species and the horrendous and despicable acts humans are capable of committing. Every day there is potential lyrical content unveiled across the globe”.

What was your creative inspiration for this Infested? What is your process for writing such brutal, savage, anti-christian and violent lyrics?

“The evil within the human animal.  Humans are supposed to possess the ability to decide between right and wrong, good and evil. More often than not they choose wrongly and commit despicable acts that can only be described as evil. Our lyrics are merely a reflection of the incorrect choices made by many people”.

“Poisonous Preacher”, one of many of my favourites tracks on Infested. What is the message behind this track?

“The song was written about the Reverend Fred Phelps founder of the Westboro Baptist Church. The song highlights some of his warped and twisted teachings”.

Laceration Mantra has just finished some great shows in Brisbane with Shredfest last August and other recent local gigs. What do you enjoy about live shows the most?

“Live shows for us are all about the audience. Let’s face it, if the audience isn’t there it’s a rehearsal. They come out to support the band/s so we want to do the best we can to have them walk away happy. There’s a real comradery within the metal scene, and it’s great to touch base with the metal fraternity at a live show”.

What did it mean for you to play at a great local and large festival such as Shredfest?

“I’m glad for Mousey most of all. Shredfest is his baby and he’s nurtured it for many years to get it where it is today. As I said earlier, he’s one of the tireless metalheads that continues to put on metal shows across the country and this see’s the Australian metal thriving the way it is. There were many great acts throughout the day. A great exhibition of Aussie metal”.

Are there other festivals on your bucket list outside of Brisbane/Queensland that you hope to be a part of in 2020? And if so, which ones are they? And why?

“We’ve done a few different festivals around the country over the years. A couple we’d still like to do is Blacken the Globe and the New Dead Fest in Adelaide. Both these festivals have established themselves now and the metal brethren across the country have got behind them.  It would be worth the trip to play those two. Like Mousey, Jason and the “Blacken” guys have worked long and hard to make these festivals what they are”.

Your last album Infested, released in 2016 was a big listen and a dark and callous experience. How successful was this album for you guys?

“We were really happy with the songs but we made a big mistake with that album in that we took so long to write and record it that, in the end we just wanted to put it out and didn’t take the time to shop it properly or do at least one video to support it. I think it could’ve done a lot better if we had a label push”.

Your live performances are renowned for being intimidating, cold, loud and well-executed. What do you do as a band to bring such energy to the stage and maintain that intense and dominating vibe the entire set?

“I think it comes naturally because we believe in the songs. The material is relentless and intense so providing we’ve rehearsed them well the energy and vibe are there. With the intensity and technicality of the music and the venomous lyrics, I guess performing these songs lead to the inevitable outcome you described”.

Tell me about the metal community in Brisbane/Queensland – is it strong and supportive or segregated? And does this impact the live scene up there, be it negatively or positively?

“We’re lucky enough to have a decent core of solid supporters of the scene. However, at times it can be segregated. Sometimes through shows being booked on the same night and other times it comes down to the bands that have been booked. We’re older blokes and have been around metal a long time. The scene is fragmented now compared to what it used to be. The emergence of deathcore and metalcore has split the scene. Many younger metalheads don’t attend old school death metal shows. It does affect numbers which are a shame”.

What is currently happening in the Laceration Mantra camp at the moment? Can we expect another album from you guys soon?

“Writing for another album. 8 songs are finished in one-way shape or form. No.9 is done but Scott and Ant haven’t added their special talents to that one yet. Scott is working on No.10. Might include a couple of bonus live tracks on the next one. As for seeing it anytime soon, I don’t think so. Will probably start tracking in the new year, but then there’s mixing, mastering, artwork and shopping for a label. Maybe this time next year if everything falls into place”.

In comparison to your previous albums, 2011 release Prolonging The Pain and your latest album Infested, how will your new material differ from these?

“It will be in the same vein of blackened death metal but there is a bit of variation in the song writing on this one. We’re very happy with the songs that are ready to go”.

You guys are currently unsigned and independent, is a label signing on your radar? What difference does it make to you as a band to be signed or unsigned? And why?

“We will most definitely be taking the time to shop the next album to as many labels as possible. Being with a good label can move the band forward both in distribution and in the live arena. They have a lot more clout with festivals etc. than an independent act does. If you’re on their roster they want to move units so they’ll do what they can to get you touring. It’s a lot more work and much harder trying to do it yourself”.

Rob, you are a legend mate, thank you so much for your time. Is there anything else you would like to leave readers with? Go for it.

“Thank you for allowing me to have a chat with your readers. To all the metalheads reading this, thanks for your support and keep supporting metal”