Review: WHILE SHE SLEEPS ‘Sleeps Society’ 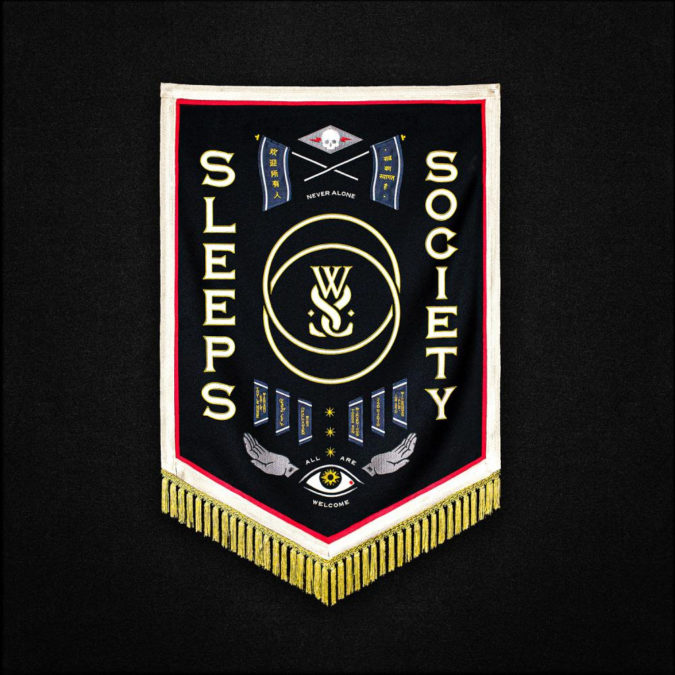 Metalcore-blimey, its Pommy upstarts While She Sleeps with their fifth studio album, Sleeps Society.

It only took me until the second listen, and I was hooked……on hooks.

Of which there are plenty. And I mean plenty. Almost too many hooks. That and the modern recording sheen that pushes everything to the maximum loudness, are the only two things I could fault about this album.

The usual metal tropes are explored to full melodic effect. Except there’s a vibe that suggests these lads are onto something classic. This is exemplified in the Supertramp influenced writing style of pianist, Matt Welsh, and classic tone of lead fret fiddler and album co-producer, Sean Long.

It’s refreshing to know an actual band member is behind the production tricks on display, and not some fancy pants knob-twiddler, who’s trying to turn shite into shine. The glitches and EDM happenings are sparse and serve only to benefit the journey the song is taking you on.

This band could do a world tour of just their breakdowns, and no one would complain. Absolute gold 98% of the time, these middle 8’s must be where they get the metalcore label from. Because what While She Sleeps offers outside these ‘breakdowns’ are slices of rock, but rock, thrash, emo, punk and any other genre tired of being a genre.

Sure there’s tracks such as “Systematic” that sound just like an ADHD Linkin Park who have fired Mike Shinoda; or as the kids like to say, Bring Me The Horizon. Guaranteed to fill a mosh pit for just under 3 minutes, it’s hard not to get into the energy-laden grooves this track and others exude. Drummer Adam Savage’s (not of Mythbusters fame) enthusiasm and thrilling drum execution perpetuate this trend throughout the entire album.

There’s real depth to spatial, djent happy thrill-seekers such as “Know Your Worth (Somebody)“, which, apart from the grammatical failure in its pun intended title, offers such rally inciting lyrics as ‘Stand tall, know your worth, They can only put you down for so long, being shouted by versatile singer Lawrence ‘Loz’ Taylor.

The aforementioned versatility is on display from harmonic protest song “Division Street” to Chester Bennington inspired belters “Nervous”, (which features a very sober Simon Neil from Biffy Clyro), through to the introspective, spoken word closing track “DN3 3HT”. Sounds like someone’s grateful for their fans and is very blessed for what they consider a ‘day job’

At the end of the day, Sleeps Society hasn’t broken any moulds and revolutionised anything in the realm of heavy music, but it has cemented While She Sleeps as a major player in today’s musical landscape.

Watch “You Are All You Need” below: