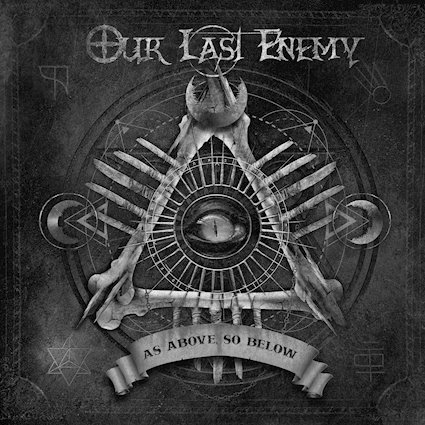 Review: OUR LAST ENEMY ‘As Above So Below’

It’s been a long time between releases (that what she said) for Sydney metal masters Our Last Enemy.

2014’s Pariah sounds dated compared to the latest instalment of terror from these purveyors of pitiless pentatonic demolishers, As Above So Below.

With able stickman John Sankey (Fear Factory, Divine Heresy, Devil You Know) in the drum seat, prepare to have your balls broken to the point of infertility as you’re treated to a masterclass in savage, remorseless supremacy that will leave you wanting, nay, needing, nay demanding more.

The precision of juxtaposition is on kingly display as a fine wire balance of melodic and in your face brutality is explored on this five-track E.P. To me, it sounds like a like-minded collective of 90’s
champs with a forward-thinking vision have combined their influences to come up with their own sound which, like Kramer, has to paint the lines to stay in its own lane. Equal trace elements of
(insert the word metal after these genre describers) Industrial, Groove, Heavy, Speed, Thrash, War, Drone and even Glam are considered and then meticulously manipulated into sonic
cohesiveness. Not a moment of cheesiness is deployed, making this an event for young and old alike.

Everything is set to at least 12 (fuck 11), even the electronic soundscape behind track opener “A Thousand Visions” has a sense of urgency like a million bees buried underneath your standing point, ready to escape via your soul.

“Long Time Coming” brings an 80’s L.A strip chorus refrain (except cheese-free remember) that proves the guys know how to leave space for all ingredients, ensuring that all flavours are experienced by the listener.

My favourite track of 2021 so far by any band of any genre is track four “The Holy Ones”. It gives off a Down vs Pantera vibe, and is the longest song on the E.P, coming in two seconds longer than sophomore track “Never Coming Back” at 5 minutes and 12 seconds. I mention this because although musically, no heavy stone is left unturned, there is no labouring of the point or excessive dull riffery here. Only an intentional amalgamation of what’s needed to get the point across in the most direct way possible.

The E.P is rounded out by “Decline Atrophy”, which also happens to be the most epic of all the pieces laid before us on the altar of supreme anger. I can only describe the outro as Cathedral like and grand in scale, yet like a heroic antagonist in nature.

So please, for the sake of all that’s unholy and feverish, please do yourself a solid, and check out Decline Atrophy on your favourite streamer now. You won’t have any ragrets I promise; P