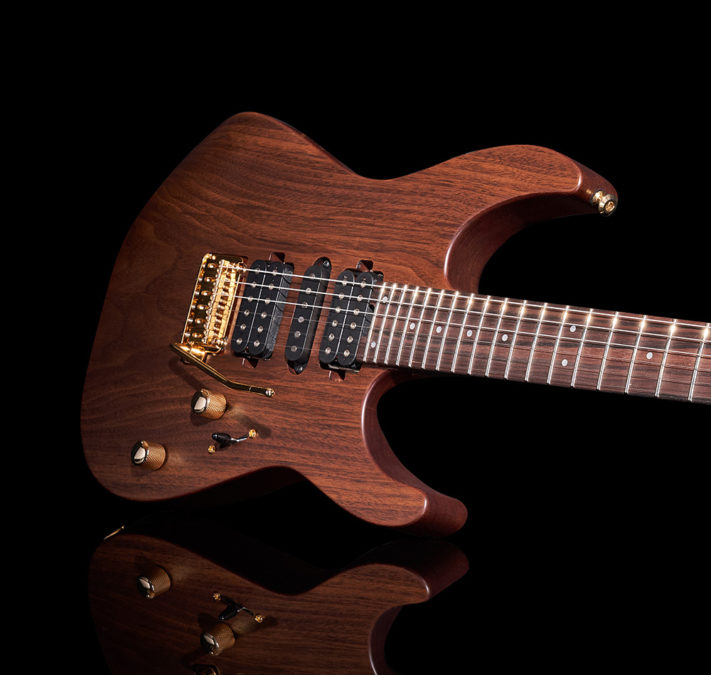 First impressions last, and when I was sent the link to this guitar that I was about to get the chance to review, my level of excitement was unimaginable. What an absolutely fine-looking instrument, and what an impressive list of top end specifications to boot.

Now, I’ve always been a fan of natural wood grain finishes on guitar, but this guitar is next level. The satin finish makes it feel like you are holding a freshly cut and polished piece of wood, and the contours on the Dinky body help you get all up and around that fresh looking Walnut top. The gold hardware gives it a nice touch of bling, while the black pick-up covers help to not overstate the sensibilities of the classic design.

After drooling on the guitar’s sleek design for a while, I grab myself a guitar lead and plug it into my full stack. Starting on a clean tone, I instantly notice the super tight and twangy tone, which almost sounds like it’s somehow been compressed to deliver a punch not usually heard when plugging direct into an amp. I play around on the cleans for a while switching between the Seymour Duncan® Full Shred™ SH-10B humbucking bridge pickup, Seymour Duncan Custom Flat Strat® SSL-6 middle pickup and custom Seymour Duncan Alnico II Pro™ APH-1N humbucking neck pickup. The five-way blade pick-up switch delivers an array of tones which sees me delve into some classic clean guitar sections by the likes of Guns N Roses, Led Zeppelin, Pearl Jam and Metallica without the need to adjust my amp EQ to achieve their varied tones.

Time to give this thing a real test though and throw some gain at it. If I must, and as I usually do, I throw some classic crunch in front of it. What I hear is a crisp bright rock tone which to be honest reminds me of the tones that bands like AC/DC and other classic hard rock bands had back in the 80s before music became all about the bass (and low mids). Although I’m not that big a fan of the early rock guitar tones which were super heavy on the Highs, and High-Mids I found myself jamming some classic rock just because this guitar held the tone so well and responded like the rock beast it’s very quickly seeming to be.

So, that was fun, but let’s see how this guitar performs at high gain. Like a punch in the face, that’s how. Wow, I talked about the punch this guitar had on cleans, but with some High Gain, this thing nearly blew my head off with maybe a little too much punch. I usually run a low bass setting with fairly high middle and treble settings, but with this guitar I had to almost reverse that. Think 4-7-7 vs 7-4-4.

Just to clarify, I’m a groove metal guitarist with roots in 90s Metal and Hard Rock and a somewhat shameful love for early 2000s Nu-Metal. I’m all about big bottom end, a tight middle end response and not so much twang in the Highs. This guitar is not the guitar for those juicy Nu-Metal tones, but with a tweak of the amp EQ it quickly became a weapon of Thrash Destruction as I found myself jamming out some early Metallica, Megadeth and Sepultura.

Let’s talk playability, shall we. This is a very comfortable guitar to play, and the 12”-16” compound radius streaky ebony fingerboard and jumbo frets, all 24 of them, make this guitar a lead player’s dream. You could just sit down (or stand if you must) and solo on this guitar forever, which I did. Well, at least until everyone in the house got sick of my pointless noodling.

Before I go, I should probably also mention the Gotoh® Custom 510 recessed tremolo bridge and Charvel-branded Gotoh die-cast locking tuners. This combination allows the versatility of a floating tremolo while maintaining the stability of tuning that you usually only achieve with solid bridges. On a shredders’ guitar like this one, though, ain’t nobody got time for a solid bridge that you can’t divebomb at every given opportunity.

To be 100% honest, I have a love-hate relationship with this guitar. Way more love than hate, though, as it is an absolutely beautiful and amazing instrument. My only beef is that it doesn’t work for my style of tone, with my current set-up, but that’s just an unfortunate dilemma for me. Add to that the dilemma of having to send this one back at some point because it would hang so nicely beside the other high-end natural finish guitars in my collection.

Not to mention, it may be the tonal inspiration I need to delve into my love for the traditional heavy rock and metal that I grew up on.

Don’t just take my word for it, though, get yourself into your local Charvel dealer and give yourself a chance to fall in love with this guitar yourself.

Check out the video below.