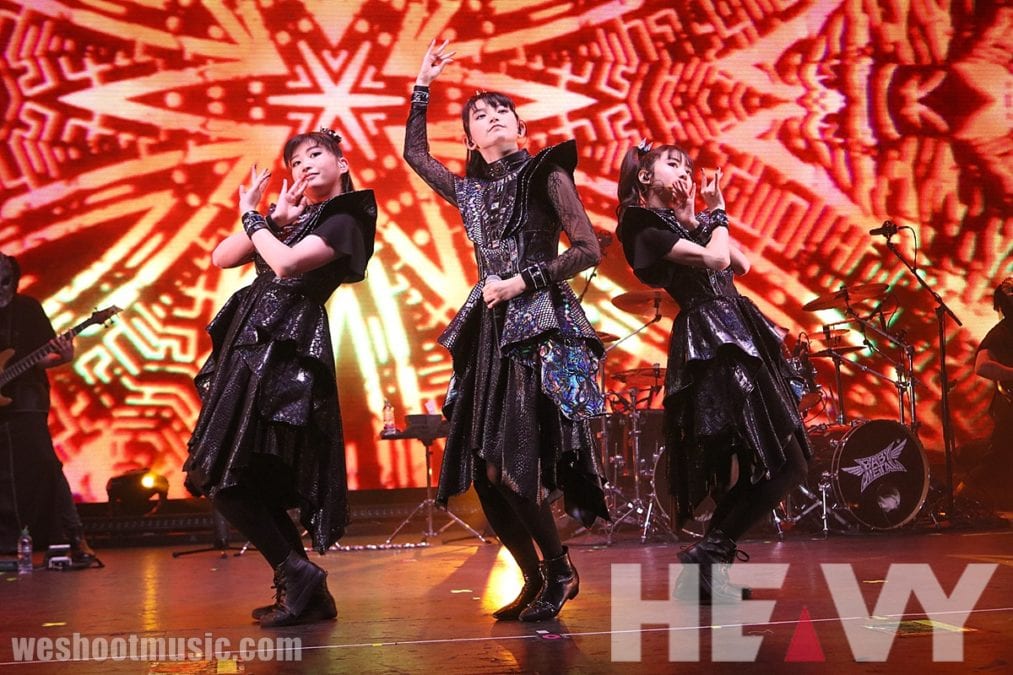 I go to a lot of concerts around the UK and I have seen so many different kinds of shows but I have to say that this was one night that I will not forget. I have been a fan of Babymetal for a while now. I have listened to their albums and have always wanted a chance to catch them live. However, whenever they have been to the UK in the past they have either been at a festival which I have not been able to attend or supporting another band. I wanted to catch them on a headline tour where the night would be about them and them alone. I find them to be such an interesting band. They manage to find the bridge, not only between genres but between groups of people. Looking around at the O2 Apollo tonight, there weren’t only metalheads there, it was a real mix of individuals. Which was nice to see. Also, I love the O2 Apollo, it is one of my favourite venues in Manchester, it’s the smallest, big venue there. Not so big that bands can’t get a good audience, but also not so small as to cramp people in. What I’m saying is, it was the ideal venue for a band like Babymetal. 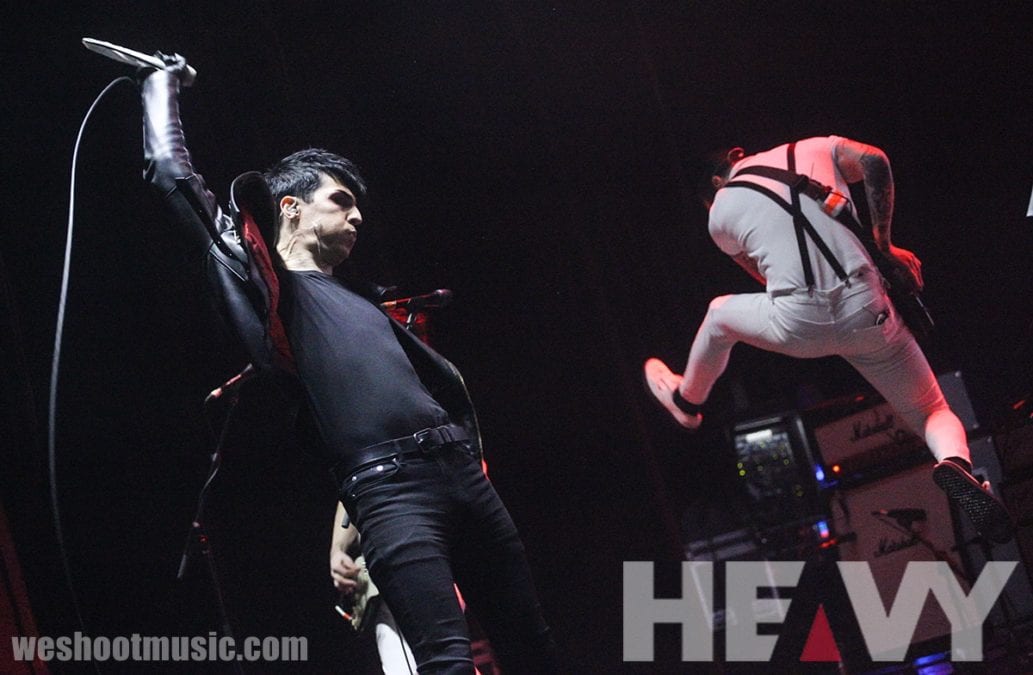 Opening up the show was Southampton based punk rock act, Creeper. Who I have not seen play live in a few years. So, this was going to be a bit of a before and after comparison on the band over the years. They came on stage as the lights dimmed and started their high-energy rock show. Their set was quite engaging as the vocalist, Will Gould was jumping around the stage and trying to get the crowd involved in the set. The music was excellent with lots of fun and bouncy melodies that got the audience jumping. I liked the vocal harmonies with keyboardist, Hannah Greenwood. It really felt like a throwback set, I felt like I was watching a pop-punk band from the early 2000s. They certainly got the crowd ready for the show. There was a firm portion of the audience that was dancing and singing along with Creeper. Their set was great and it was great to see them again after so long. They have certainly come a long way from the band I saw in a much smaller venue a few years ago. The lights went out and a massive light show displayed on the screen as the band took their positions with the instruments as the crowd awaited Su-metal & Moametal to come on stage. Babymetal took the Manchester O2 Apollo by storm with a spectacular song, dance and light show. I have been to a lot of metal gigs in my time but I have seen nothing like this. This show was so well done, from the setlist to the choreography, to the sound this show had it all. The set was a great mix of older hits and their newer material from the new record Metal Galaxy.  The crowd really came alive when the band played the mega-viral hit Gimme Chocolate and also you could tell that the band was having a lot of fun too. There was nothing in terms of crowd banter, obviously because of the language barrier, but metal music transcends culture and language and the crowd was having all the fun in the world along with them. I think one of the big moments that people really enjoyed was Oh MAJINAI where a giant Joakim Brodén (vocalist of Sabaton) took over the screen. This was awesome and the energy of Babymetal was so infectious. I genuinely couldn’t stop smiling throughout the show. 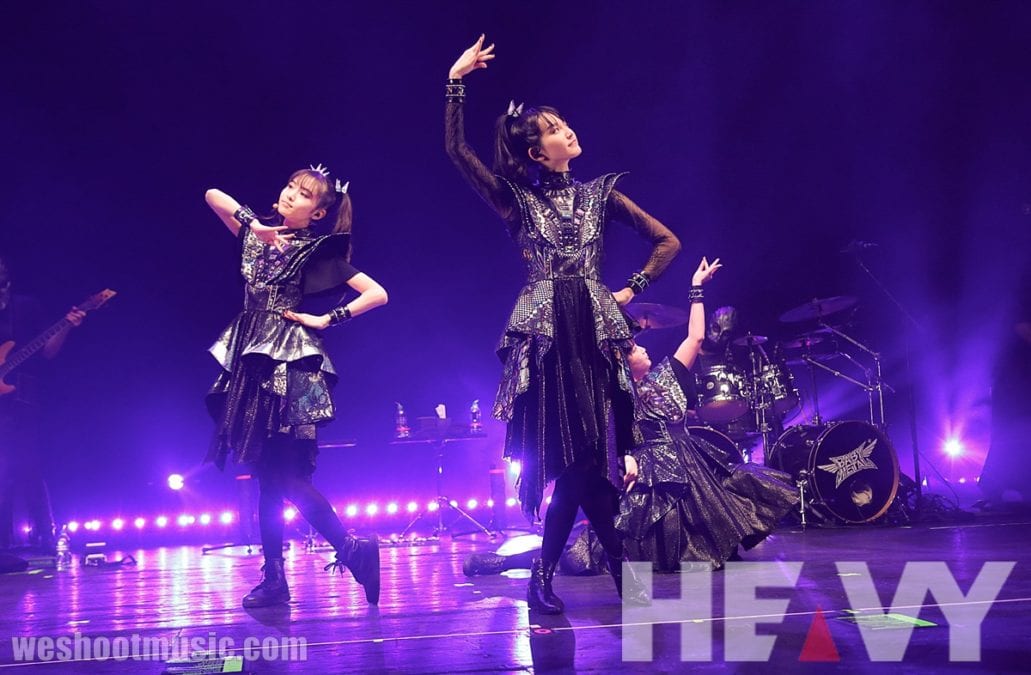 Unlike a lot of metal shows, I can comment on the choreography. Which was spot on. The dancing was well coordinated and you could tell some serious time and effort went into rehearsing it. Also, the fact they were dancing around plus singing at the same time was impressive. I was exhausted just watching them move and sing. All the while they had big smiles on their faces and it was nice to see. This has to be one of the most energetic and fast-paced shows I’ve been to. No song felt like it outstayed its welcome and the set was so well-paced nothing the night just felt like it flew by. That was another thing about this show, it finished quite early. Babymetal was only on stage for about an hour and ten minutes. The show started at 9 pm and finished shortly after 10 pm. This was actually a pleasant surprise. It meant people could get their public transport in time and people who were driving could get home quicker. In a weird way, I actually like this decision. The set ended with the commanding and powerful song Road of Resistance.  I think this was a nice way to end and cap off the set. Something to really send the fans home happy. Overall, an excellent set with an infectious atmosphere and energy that kept the crowd happy all the way through. If you ever have the chance definitely check them out.