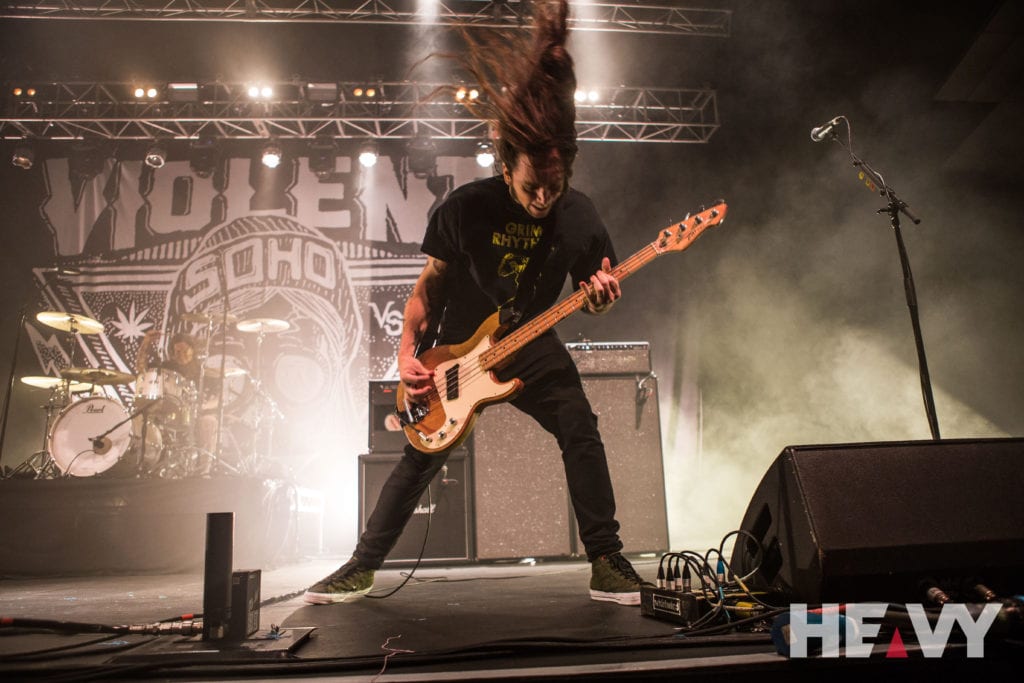 It was a cool Hallows’ Eve as hundreds flocked to Festival Hall, a desperate effort by many to escape the vast array of eerie, grotesque creatures let loose on Melbourne’s streets…

Actually, that’s a standard evening in Melbourne, and it was our alt-rock legends Violent Soho that drew the enormous crowd on the spookiest night of the year.Before the Mansfield lads took the stage, Perth’s

Before the Mansfield lads took the stage, Perth’s Tired Lion gave the already sizeable crowd a chance to warm up and get comfortable. Frontwoman Sophie Hopes filled out the gigantic and, aside from the growing crowd, otherwise lifeless venue with her piercing vocals and the band’s ongoing banter with the audience kept the crowd lively and eager. Pretend and I Don’t Think You Like Me were evident crowd favourites, and it seemed clear that everybody did, in fact, like Tired Lion.Up next were Tasmania’s

Up next were Tasmania’s Luca Brasi who, right from their opener Say It Back, had their audience off the floor. The band’s trademark Aussie pop-punk served as a perfect precursor to Violent Soho, and the band’s dedicated Melbourne fan-base were out in full force. Aeroplane and The Cascade Blues were the highlights of the set, with a few crowd surfers game enough to take to the skies, and the band’s latest album If This Is All We’re Going To Be was well received by new and old fans alike.At this point, it can safely be said that no one throws a Halloween party quite like L.A.’s

At this point, it can safely be said that no one throws a Halloween party quite like L.A.’s The Bronx. Clad in skin-tight, black bodysuits from head to toe with red capes and some funky masks, the band made their entrance with the tribal intro of Heart Attack American and an enormous banner of King Kong, complete with glowing red eyes. Charismatic vocalist Matt Caughthran greeted the audience with a cheeky “Happy Halloween Assholes,” before launching right into his spine-chilling, blood-curdling screams. What followed was 50 minutes of pure carnage; Caughthran was adamant that the crowd “fuck shit up,” and fuck shit up they did. Shitty Future and Knifeman generated an unprecedented expulsion of energy from the audience, and even as the set concluded with They Will Kill Us All and History’s Stranglers, The Bronx delivered their rowdy brand of punk rock to perfection.It was genuinely astounding that after all the by now

It was genuinely astounding that after all the by now close-to-maximum-capacity crowd had been subjected to at the hands of The Bronx, they still had the energy for over an hour of lie music by Australia’s finest alt-rock quartet, Violent Soho. Nonetheless, as the band took to the stage, it was abundantly clear who everyone in the venue was here to see.From the very first notes of

From the very first notes of Dope Calypso, the crowd was prepared to party. I feel like that’s the best way to describe a Soho concert; one enormous, eardrum shattering, out of control party. Old favourite Jesus Stole My Girlfriend and new favourite Like Soda were as well received as ever, and it was hard to determine who were happier; the band, with their huge grins and radiating humility and virtuosity or the crowd as they chanted every lyric back to the band without missing a word. Saramona Said and Fur Eyes were note perfect in their delivery, and the guitar melodies soared over the heads of hundreds of people below. Luke Boerdam’s vocals could not be faulted, and minimal crowd interaction left all focus on the sheer quality of the performance delivered by the band. Encore chants began without delay as soon as the band left the stage, who returned to play Tinderbox and Covered in Chrome to an eagerly anticipating crowd.Although

Although Slipknot may have been across town tearing it up at the same time, on Halloween, Festival Hall celebrated the Australian way: sinking tinnies and having a mosh to, unarguably, one of Australia’s best live bands of all time. For anyone who missed out, or who wants to relive the experience all over again, catch Violent Soho and Luca Brasi at UNIFY Festival from 13-15 January 2017 in Gippsland, Victoria.