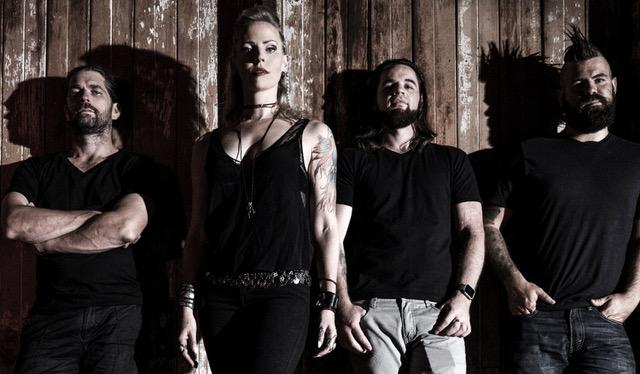 Sydney progressive metal quartet Red Sea have just released their brand new single Hurricane !
With its titanic guitars and rack-tom heavy drumming offset against the angelic yet powerfully striking vocals of frontwoman Erica Bowron, Hurricane weaves its way into your subconscious and makes itself at home.
There is no escape, just like for the people in the songs music video.
The video was directed by Erica AND the Ford Mustang featured in the clip belongs to her too!
Erica says of the video: “The whole process of designing and creating the Hurricane video has been incredible! The team, the locations and the results have been nothing short of epic and I’m so exciting for its release! Being my Directorial debut I wanted to create something special – the song itself is rather epic so I wanted to make a video that would match and even heighten the drama and emotion already in the song. (Hurricane’s Cinematographer) Andy Stavert and I had only met once before at a 40s themed party at Tara Moss’ house no less, which we were both invited to through our respective sisters. We hit it off straight away but it wasn’t until months later when I saw some of his drone footage that I knew Andy was the cinematographer for the project. We both knew we were being ambitious but were also so excited by the concept that we just kept feeding off each other and pushing the boundaries.
For the narrative, I wanted Bonnie and Clyde meets Romeo and Juliet….and I think we got it!! Our gorgeous talent, Zac Davey and Kayla Rose Thornberry, are actually a real-life couple and are dear friends of the band. And yes, the matching batman tattoos are real!! Despite never acting before, they jumped at the chance to be involved when I pitched the concept to them and (as you can see!) were just amazing. Asking Zac to do a death ‘pieta’ scene in the bush and Kayla to almost drown in a wedding dress in the ocean at dawn were pretty big asks if you’ve never acted before! They were consummate professionals and to be honest, everyone on set actually so much fun despite to the dramatic storyline. The other “character” of the story is of course my beatiful Ford Mustang that features as the getaway car…as much as I love Zac and Kayla, I did the stunt driving for these scenes ;D “
The other dominant element in the clip is obviously the Australian landscape. The ocean, bush and band-on-the-cliff shots all work to dominate and almost overpower the storyline. To me, you can’t get more raw and elemental than the Pacific Ocean smashing against a cliff-face or the beautiful but dangerous expanse of the Australian bush. I wanted the gravitas of the landscapes to work in tandem with the drama playing out with the characters. The landscape starts as a backdrop but gradually overpowers the narrative and ultimately ends up consuming our characters completely. Nothing highlights the frailty and temporal nature of humans, even powerful love and loss, like Mother Nature.”
****
Red Sea burst onto the music landscape in 2016 with their debut EP Battlescar that was produced by the legendary triple Grammy nominated Rick Will (Fear Factory, NIN, Cold Chisel)
With a sound likened to the love child of Evanescence, Muse and A Perfect Circle, Red Sea stand out among a um sea of sameness.
Red Sea have played the Sydney Opera House and last year opened for Hungary’s biggest band Tankcsapda on their Australian tour.
A full debut album planned for release later this year but before then, Red Sea will embark on a run of shows across NSW and Victoria.
TOUR DATES
Friday, March 23: The Imperial Hotel, Armidale
Saturday, April 7: The Bald Faced Stag, Sydney
Saturday, April 14: Small Ballroom, Newcastle
Saturday, April 21: Transit Bar, Canberra
More dates tbc
Official Event Page
www.facebook.com/tours/481514708930758