Boston-born pop punk outfit BOYS LIKE GIRLS will be returning to Australia in April 2020 for the first time in nearly a decade to perform in Perth, Adelaide, Melbourne, Sydney and Brisbane.

At these incredibly special shows, BOYS LIKE GIRLS will be performing their cult classic self-titled debut album in full, along with fan favourites from their stellar discography.

The RJA story goes back to 2003, when brothers Ronnie and Randy Winter formed the band who would end up singing to Virgin Records for the release of their debut LP, Don’t You Fake It in 2006. The album is certified Gold in the US, and features the singles Guardian Angel and their best known song, the anti domestic violence focused, Face Down.

Their second album Lonely Road was released in 2008 and following Virgin’s collapse, RJA became fully independent in early 2010, regaining full creative control of their sound and vision.
Since then it’s being done the Red Jumpsuit way, Am I The Enemy was released in 2011 and album number four, 4 in 2014. All charting and all pushing the bands message further around the world.

Known for their devout Christian beliefs, the bands spirituality flows through their lyrics which cover a lifetime worth of emotions. The darkness and the light, the struggles and the wins. The bands message is ultimately one of hope and a reminder that ‘Even on the worst day that you’re alive you’re still surrounded by so many awesome things that you should be grateful for, if you choose to look at them.’ Ronnie Winter

If you’ve ever seen BOYS LIKE GIRLS or THE RED JUMPSUIT APPARATUS live then you’ll know why this tour is so special, and if you haven’t, here’s your chance to see why!
Both bands will be giving their long-time fans a one-off special experience. 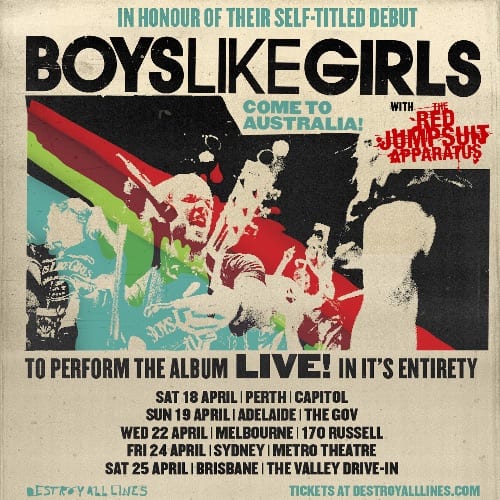