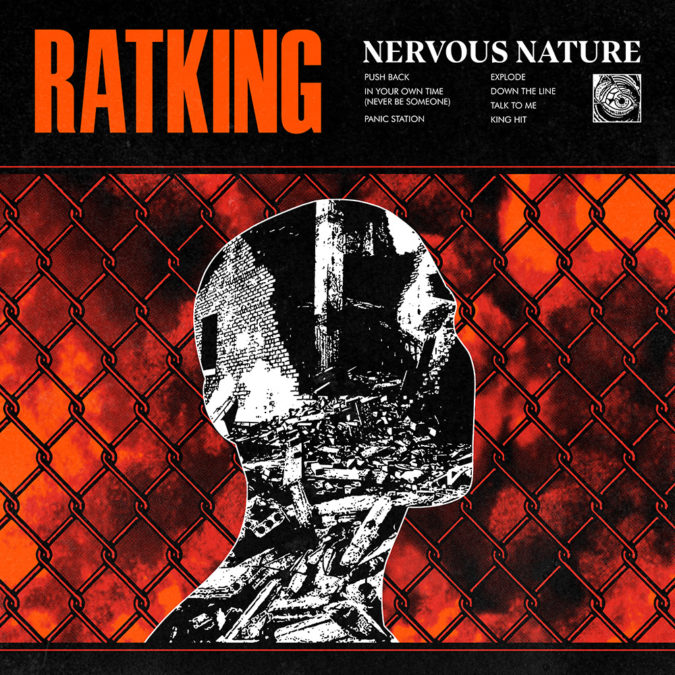 Perth is a place on the other side of Australia, that no one really gives a rat’s ass about. Why, because it’s a fucking long way away, and to be perfectly honest, there’s fuck all there to care about.

For some unknown reason, though, your rat’s ass now has a king, aptly titled Ratking. And as all good kings do – most actually don’t – this king has just dropped an EP on us titled Nervous Nature. I’d be nervous too if some TNUC from Heavy Mag was about to review my shit.

Anyway, the album opens with some kind of punk track titled Push Back. It’s got a bit of a grindcore overtone with heavy fast vocals, but when it hits the chorus it gets its pop punk on. A heavy groove metal riff kicks in shortly after, and the track takes a short detour before getting back to its punk beginnings.

In Your Time is next up, and it kind of feels a lot like the opening track, with its mix of punk riffs, grind vocal verses, and pop punk choruses. The rolling bassline adds to the overall punk feel of the song. The mix of heavy grind and clean pop vocals create an interesting contrast.

4 minutes into the EP, and we’ve already hit track no 3 titled Panic Station. That track title almost explains the sound of this band. It’s pretty much punk, but with those grind and pop overtones as mentioned with the previous two tracks. It’s almost like the band is in some kind of panic about being genre pigeonholed.

Explode is aptly titled due to an added bit of explosiveness that the tracks before it had lacked. This is their heaviest track so far, and it pushes more into the Hardcore and Metalcore territories.

Much like the track before it, Down The Hole follows suit with an overall heavier theme. It does however have some weird kind of synth in the background, which I’d thought I’d heard earlier in the EP. This could be an effected guitar, who knows, I just know it’s a strange but interesting sound poking through the mix.

Talk to Me opens with that weird synth sound, which I am now favouring as an effected guitar. I don’t know why, but this song for some reason reminds me of Silverchair, even though it sounds nothing like Silverchair. I think there was just one little phrase that sounded something like Freak. If Daniel Johns wasn’t such a pussy, maybe Australia’s Nirvana wannabes may have sounded something like this.

EP closer King Hit isn’t so much of a king hit as it is a meandering left hook. This reminds me of something too, but fuck knows what. It’s a cool sounding track, it’s just not very exciting. Maybe it was just an extra track that they had and thought they’d add it to the EP for a fade out.

Just one more 25-minute track, and they’d have almost had themselves an album. It was an enjoyable EP though, and definitely worth a listen if you have 15 minutes so spare.