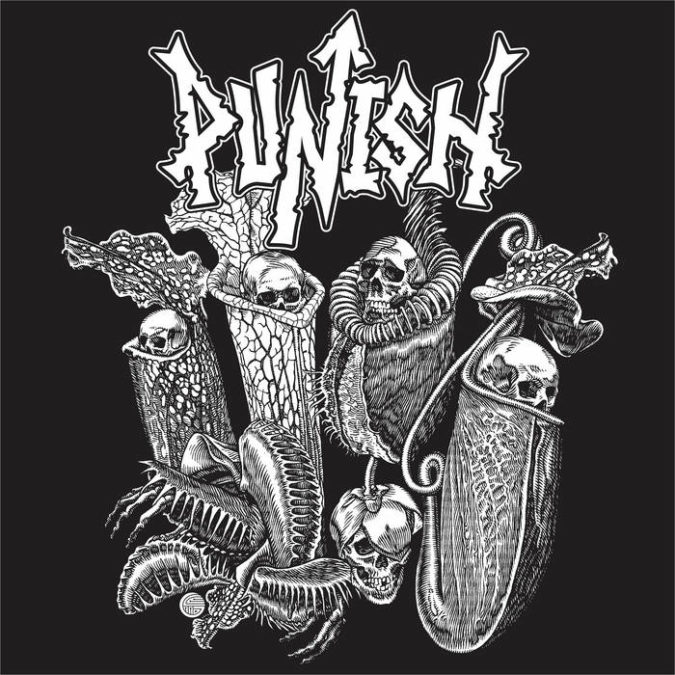 We might not all admit it, but I’m betting a fair chunk of people reading this don’t mind being dealt the occasional form of punishment.

This can manifest in all sorts of weird and wonderful ways, but these days I prefer my punishment served up in the sonic form.

I’m too old for the rest of the bullshit.

Anyway, when the debut self-titled album from Sydney punk/hardcore outfit Punish landed in my inbox, I thought why the fuck not. It’s been a while.

Upon closer examination I discover that two thirds of the trio are from one of my favourite thrash outfits Astrodeath, and, although I am unfamiliar with the name of the vocalist, by virtue of him being good enough to play in a band with Tim (bass/vox) and Yoshi (drums) then I’m guessing that he packs a verbal punch as well.

Cut Teeth hasn’t even begun before a chilling voice (that sounds suspiciously like Jason Whalley from Frenzal Rhomb) declares “oh, what a fucken punish” and at this early stage I am already thinking about padding up for what is likely to come.

The song rips straight in courtesy of a screaming guitar lick that is offset by powerfully struck drumming before vocalist/guitarist Tome screams into the darkness, dripping with venomous intent.

The track is a whirlwind of old school punk mixed with enough hardcore to break teeth rather than cut them.

The song screeches into overdrive, a pulsating sonic blast of tempered precision that would decimate any dance floor before even surging half way through.

A nice breakdown at about that point shows Punish aren’t all brute force, as if that isn’t already obvious in the pedigree of the deadly duo that comprise Astrodeath.

I make a mental note here to not harp on about Tim and Yoshi’s other band because already Punish have proved themselves to be a stand alone entity and deserve to be known for their musical output rather than the people behind it.

Colonial Minds kicks off with a stomping drum beat before the guitars join in and lead us headlong into another angst driven number that channels pure aggression.

The hooks are already meaty enough to snag a barramundi and the fast paced tempo inherent throughout is dangerously infectious.

Tome is an authoritative presence out the front, and gives the impression he would turn into a snarling demon on stage.

It feels like he is screaming directly into your soul, toying playfully with your inner consciousness while simultaneously luring you into a musical abyss from which resistance would be futile.

This track again produces an awesome break down towards the middle third, pulling back enough for Tome to measure his vocals a touch while still maintaining an underlying menace. The guitar sounds almost Egyptian in parts, but that’s about as close as we are going to get to royalty here.

This is more music for the downtrodden and neglected, offering chaos through the calm with an unrelenting current of carnage that is strangely reassuring.

Grief swarms with guitar licks to lay the platform for another fast paced piece of intensity, Tome launching into a vocal attack that surely must be directed at some particularly nasty character from his subconsciousness.

This track oozes punk charm, the guitar breakdown chugging mid way through long enough to gulp some air into your lungs before plunging headlong back into the darkness.

Masquerade breathes life courtesy of a bit of back and forth from all three members before a machine gun like drum roll sparks the tune to life. It is a more evenly structured song that still feels like it could explode at any moment.

Although being a band on its first album, Punish have already learned the importance of variety within their music.

While they may be a proudly fast band musically, they also know that too much of a good thing can turn sour if allowed to spiral continually of its own volition.

Century Of The Self is led by a thunderous bass intro that gives way to whirring noises and what sounds like triangle strikes before the guitar overpowers everything and the unseen battle continues.

I dead set reckon if a newly married couple on their honeymoon full of love and hope for the future put this on the stereo, they would end up in a bloody divorce long before the final track rumbled to a close.

The Spectre Of Scepticism (try saying that after a few JD’s) is up next, an almost marching like precision of drums giving the false impression this could be the token ballad of sorts.

It soon finds fifth gear, creating yet another sonic wave of destruction that this album has in abundance.

It is certainly the most accessible track so far, complete with harmonies of sorts, but quickly turns into an all out jam which sees each of the instruments given their time in the spotlight. I can only imagine the fun Punish would have with this one live.

Expose The State does so by way of a crushing guitar riff that gains momentum once the drums come to the party. Whoever mixed this album has done a fine job because despite the frenetic nature of the music each instrument comes across with value, not once getting lost in the ferocity each has created.

It is yet another track that could incite an army, pulling itself up at junctures to maximise effect before regaining momentum and taking you straight back down the dark rabbit hole.

Final track Defund is up next, and it hardly feels like I have been listening longer than fifteen minutes, which is a sign of a great album.

This track begins with more of a rock swagger, chugging guitars maintaining a rhythmic pace that is bastardised when and where required.

I don’t know about the guys in the band, but I’m fucked out after just listening to Punish, but they haven’t finished with me yet. Things get quick, damn quickly, and anyone brave enough to attempt to headbang in time would almost certainly find themselves with just a stump where their head once stood.

Instead of winding to a conclusion, Defund rapidly gathers steam until a distortion fuelled finale that leaves a sense of impending anarchy long after the reverb rings out.

Punish have delivered eight tracks of unrelenting ferocity here that unapologetically bleeds punk rock mayhem. It would be a great album from an established band, but coming from a band just starting out is a work of art.