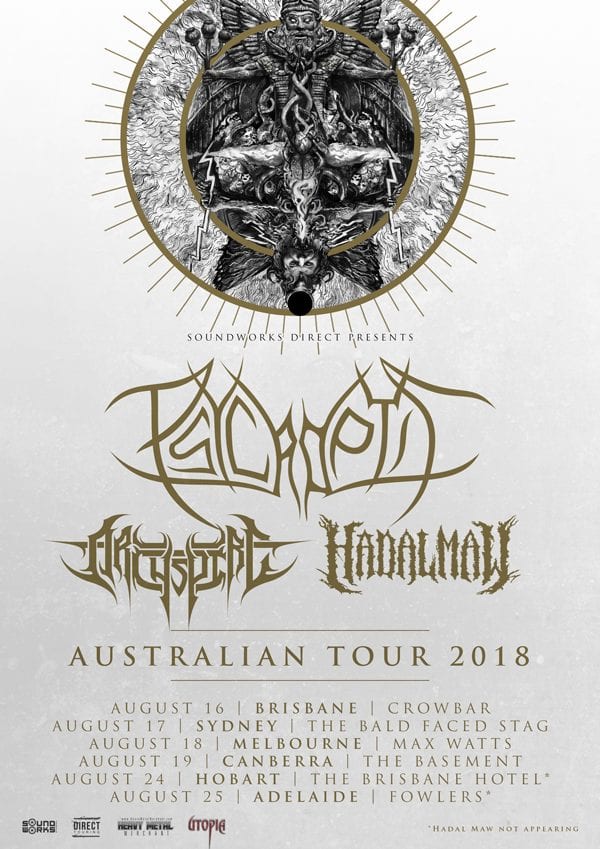 Hailing from the tiny, frosty, untamed and detached Australian state that is Tasmania, Psycroptic have become an unparalleled act. Since their formation in 1999, the band having released 6 critically acclaimed studio albums, all which show an organic progression along a clandestine path. Powering their way to the top of Australian metal scene in the early 2000’s, Psycroptic to this day still reign supreme and show no signs of slowing down anytime soon!

Canadian technical death outfit Archspire will bring a tight live performance to their first shows down under, where impressive speeds twist and contort into complex passages. An attention to song writing, focusing not only on technicality, but originality as well, take this sub genre and put it on it’s ear. When all the elements required align in such a way that they form something original, and interesting, it becomes a catalyst for something new… and in the case of Archspire, all has indeed, aligned.

Emerging onto the Australia live metal scene in late 2012, Hadal Maw have remained a talking point in the conversation on technical metal. With their critically acclaimed albums “Senium” and “Olm”, they’ve earned places on the stage alongside the likes of Decapitated, Suffocation, Ne Obliviscaris and many more. This tour will see the debut of their latest work “Charlatan”, an effort to drive the darkest elements of their music to the forefront of their sound.

You can catch Psycroptic, Archspire & Hadal Maw performing at: