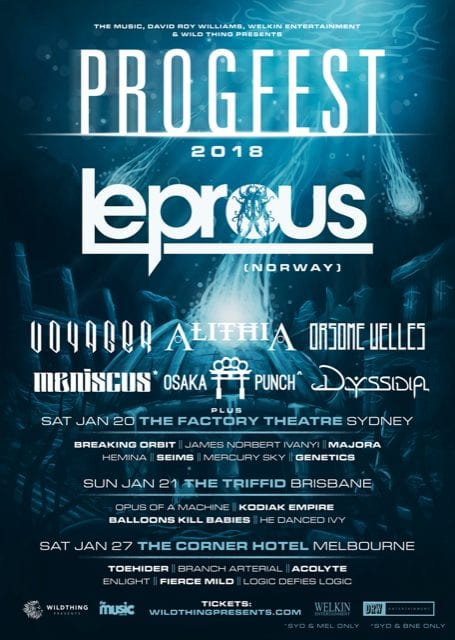 Not long now ladies and gentlemen for PROGFEST 2018. If you haven’t got your progy juices dribbling yet then wrap your ears around this Spotify playlist. Discover new bands, hears some absolutely smashing tracks and flex your mind in preparedness for what will be, and always is, a fantastic PROGFEST. Feast on it. 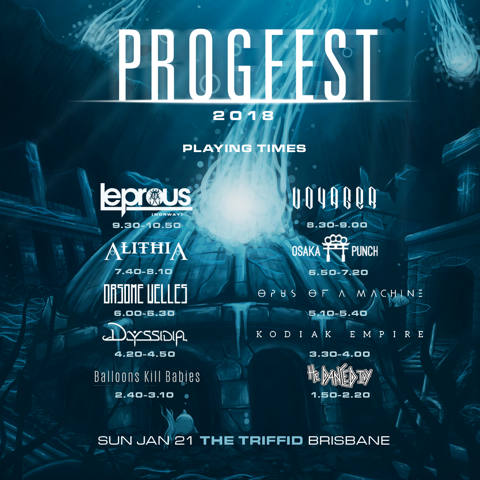 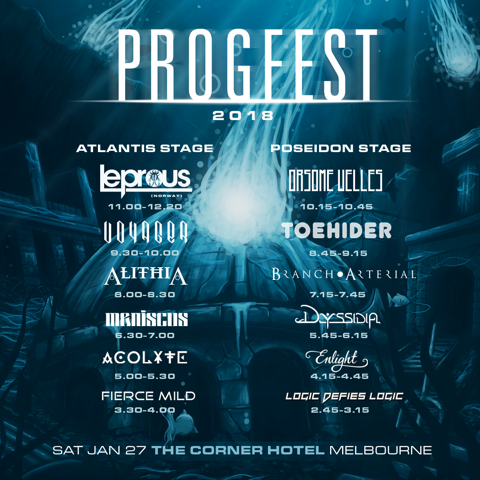 LEPROUS HEADLINE SHOWS
with special guests AlithiA
Friday, January 19: Badlands, Perth
with supports Bury The Heard & Kripke’s Illusion
Thursday, January 25: Jive, Adelaide
with supports Dyssidia & Colibrium
Tickets from wildthingpresents.com
PROGFEST 2018 Featuring:
Leprous
Voyager | AlithiA
Orsome Welles | Meniscus | Osaka Punch
Toehider | Breaking Orbit | Dyssidia
James Norbert Ivanyi | Opus Of A Machine | Branch Arterial
Majora | Acolyte | Hemina | Kodiak Empire
Enlight | Seims | Balloons Kill Babies | Fierce Mild
Mercury Sky | He Danced Ivy  Logic Defies Logic | Genetics
Watch the Progfest Video here
https://youtu.be/Ed1mpl5uVpo
ABOUT PROGFEST
Progfest 2018 has expanded to include all three east coast capital cities, hitting Sydney and Brisbane along with returning to Melbourne, following its December 2016 sold out edition!
Featuring progressive bands of all styles and genres, from prog, post, psychedelic, art rock, metal and everything in between, PROGFEST is about showcasing bands that think for themselves;
bands who rather than following the latest trends, have decided to challenge themselves musically and create music with depth and vision.
Beginning life in 2008, Progfest has grown alongside Australia’s love of progressive music and has become the centrepiece of the nation’s burgeoning prog scene.
In the intervening years, the progressive scene in Australia has exploded and the bands associated with it are now a global force to be reckoned with.  Many of the acts have gained huge followings from all over the world. Ne Obliviscaris, Caligula’s Horse, sleepmakeswaves and Twelve Foot Ninja  have all headlined Progfest in the past, and each of them has gone on to crack the ARIA Mainstream chart and have global success.
facebook.com/Progfest