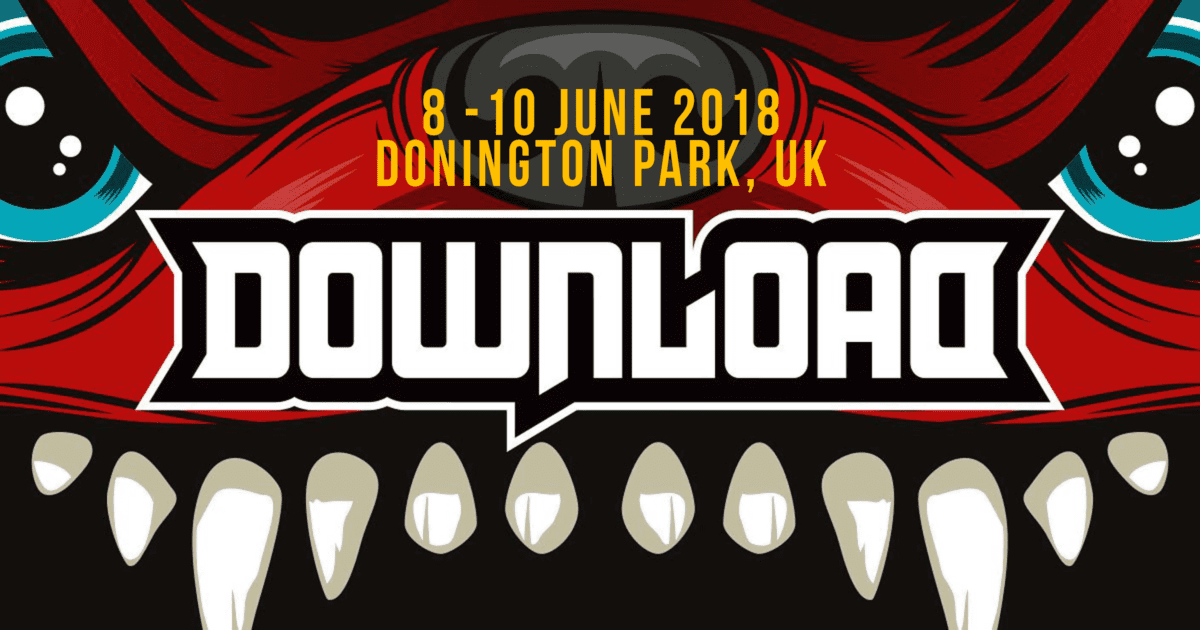 Somehow, the Earth has almost turned 365 times since Download Festival 2017. At time of writing, Download Festival 2018 is only 36 days away, and weather websites are already predicting thunderstorms across the weekend (quelle surprise, eh?). HEAVY also foresees thunderstorms, but less the wind-and-rain type and more the pyro-powered, voltage-driven line-up the highly esteemed Andy Copping has devised for us.

So now, without further ado, feast your eyes upon HEAVY’s carefully selected whos-who buffet from this year’s Download line-up (– and with over 100 acts on the bill, we were spoilt for choice!):

Avenged Sevenfold (AKA ‘The Evolving Ones’)

Known for: evolving through several drummers and several genres of metal.

Not to be missed because: their previous pyromaniacal Download performances, complete with eerie ghost train-alike stage props, have proved to be an enticingly magnetic force to Downloaders, pulling in swarms of spectators.

Expect: no escape from the cavernous stare of a giant skull head; thousands of spectators maniacally expressing hails to the king.

Bullet For My Valentine (AKA ‘The Darlings of Kerrang!’)

Known for: heavy metal excellence that has won them Best British Band at the Kerrang! Awards three times in a row, amongst a scoop of other awards.

Not to be missed because: one of the aforementioned accolades include Kerrang!’s Best Live Band, which is no surprise given their unadulterated grab-by-the-balls approach to stage mastery: darkly predatory instrumentation meets confidently predatory performance.

Expect: an army of teenagers to charge in and take your spot in the crowd.

Nothing More (AKA ‘The DIY Ones’)

Known for: spending a decade going the industry alone, and eventually getting their happy-ever-after record deal from the Eleven Seven Music Group; self-constructed, head-turning stage props.

Not to be missed because: their special blend of elvish-meets-bestial alternative rock will blow a fresh breeze in amongst the more classic sounds of the musical weekend jaunt. Oh, and they have a 400-pound, 14-foot electronica stage piece dubbed the ‘Scorpion Tail’ that’s comprised of discarded vehicular machinery, and was constructed by their bassist, Daniel Oliver…

Expect: first-time spectators to miss half the show due to their participation in heated discussions that debate what the hell the Scorpion Tail actually is.

TesseracT (AKA ‘The Djent Trailblazers’)

Known for: their pioneering input into progressing progressive metal, particularly of the Djent vein.

Not to be missed because: their mystically atmospheric, transcendently stratospheric sound will amplify the lost beauty of whatever natural elements Downloaders are fated to face this year. Bitter rain and wind will be reinterpreted as the breath and tears of a higher being; harsh, burning sunshine as molten gold.

Expect: the above journalistic hyperbole to materialise as false advertising: TesseracT will transmit an ethereal haze of sound, but there will be rain and it will be grim.

Volbeat (AKA ‘The Danish Sensations’)

Known for: topping Denmark’s charts with their fusion of classic rock’n’roll flare and metal muscularity.

Not to be missed because: Grammy-nominated Volbeat please rock fans across the spectrum, with influences stretching from Elvis and Johnny Cash to Metallica. Their confidently vibrant performances make for an enchanting rock act.

Igorrr (AKA ‘The Mad Scientist’)

Known for: creating his own musical test tube baby compiled of metal, baroque music, breakcore and trip hop – and performing it with all the rage and demeanour of a resurrected corpse that was buried alive.

Not to be missed because: the human imagination itself is all too likely to get lost in the maze of the above musical concoction, much in the way that if you tried to describe a Picasso or Salvador Dali painting, the mind would remain a jumble of incoherent imagery. Igorrr is very much a ‘see it to believe it’ act of artistry.

Expect: to be challenged in your musical open-mindedness; that one guy who ‘totally gets it’ and isn’t afraid to show it.

Dragonforce (AKA ‘The Melodic Guitar Heroes’)

Known for: single-handedly mangling the hands of Guitar Hero 3 players everywhere thanks to the placement of their extreme-velocity “Through The Fire And Flames” in the game.

Not to be missed because: besides nostalgia for Guitar Hero players, rumour has it that Dragonforce guitarist Herman Li manages to push his insane playing rapidity to an even quicker pace live compared to that which is heard on albums. So for any Dragonforce gig virgins, it’s worth a quick peek to see if legend is true…

Expect: heads to propel off of spinal chords as they attempt to bang in time to the band; arguments over who was best at Guitar Hero.

Known for: ensuring thrash does not croak its last breath, whilst nodding to metal giants like Metallica and Megadeth.

Not to be missed because: Savage Messiah exude the gnarled edge of their metal ancestors that has so pleased many generations of rock fans: savage by name, savage by nature.

Guns N’ Roses (AKA ‘The Resurrected Ones’)

Known for: being ‘the most dangerous band in the world’, one of the most notoriously delectable debut albums of all time, and horrific timekeeping.

Not to be missed because: featuring original members Slash, Axl Rose and Duff McKagan all together for the first time since 1993, this will be England’s third peek at a legendary resurrection. For some spectators, their appearance will be an itch of curiosity that must be scratched – for others, a dream come true.

Babymetal (AKA ‘The We’re-Cute-But-We-Bite Ones’)

Known for: providing both joy and bewilderment to metal fans – a hate-to-love, love-to-hate, love-to-love act.

Not to be missed because: what other artist could provide Downloaders with a metal band that emits music that’s enough to slam spectators against the wall, whilst a dainty dance trio juxtaposes such brutality with the “cutesy” Japanese idol genre? I’ll await answers on a postcard.

Expect: bizarre notions for walls of deaths and circle pits that further emphasise the absurdity of the paradoxical Babymetal experience…

Black Stone Cherry (AKA ‘The Southern Fried Ones’)

Known for: deliciously heavy, southern-drenched riffs and ballads fit to illuminate a whole stadium up with lighters.

Not to be missed because: as ringleaders of the 21st-century southern rock resurgence, Black Stone Cherry hold a tantalisingly dynamic edge to their performances that has amounted from 17 years-worth of expertise in rock’n’roll showmanship.

Expect: canoodling couples during country ballad “In My Blood”; plenty of nodding heads from plaid-shirted men in trucker caps.

Known for: fire-and-water prog rock that descends like a wash of lullaby but is also interspersed with sparks of voltage.

Not to be missed because: other than the merit of their impressively crisp harmonies, VHB delivers their music with the sort of incendiary incandescence that transfixes viewers.

Thunder (AKA ‘The Cheeky Chappies’)

Not to be missed because: their happy-go-lucky shows may be laced with light-hearted banter, but Thunder pack a lean, mean musical punch that has little waned since their Donington debut in 1990.

The Temperance Movement (AKA ‘The Rock’n’Roll Revivalists’)

Known for: exquisite rock’n’roll riffs that snake-charm hips into swaying and a frontman with a voice to rival a Faces-era Rod Stewart.

Not to be missed because: having just charted at #6 in the UK Top 10 with the latest album, A Deeper Cut, The Temperance Movement are the sort of revolutionists that are making a stand for great rock’n’roll in the 21st century.

TIGRESS (AKA ‘The Rebranded Ones’)

Where: The Avalanche Stage

Known for: shedding their pop-punk exoskeleton The Hype Theory to blossom into the sleeker, alt-rock band they are today.

Not to be missed because: frontwoman Katy Jackson shows all the spunk and vocal velvetiness of Paramore’s Hayley Williams, executing each performance with strategic confidence: a true credit to women in rock today.

Expect: to experience itchings to re-live the golden era of Paramore (I’m talking wholly-belted performances of “Misery Business” beside the crêpe stand).

Ozzy Osbourne (AKA ‘The One Who Never Retires’)

Known for: would ‘controversy’ be an understatement?

Not to be missed because: with Black Sabbath neatly tied up in a bow for deliverance to another world, performances by the inky black mad lad marvel should be lapped up where they can be. Forming part of Ozzy’s comedically dubbed No More Tours 2, this performance may mark the slow withdrawal of the Prince of Darkness from the public eye.

Body Count Ft. Ice T (AKA ‘The Ones Who Pissed Off The President’)

Not to be missed because: given the present day turmoil of our little Earth, Body Count’s music is possibly more resonant than it has been since their debut in 1992 – their set will be a catharsis of exasperation for all concerned.

Expect: heated political allusions; sudden inspiration by multiple spectators to be the founding members of the next Body Count/Rage Against The Machine/Prophets of Rage.

Marilyn Manson (AKA ‘The One Who Curdles Blood’)

Known for: a continual battle against accusations of corrupting mankind, whilst selling millions of records that helped to front the industrial metal movement.

Not to be missed because: Manson’s track record of shock-inducing shows (from on-stage self-harm to on-stage bottling of one of his own spectators) is enough to incite fierce curiosity to take a peek.

Greta Van Fleet (AKA ‘The Second-Coming-Of-Zeppelin Ones’)

Known for: old-school blues riffs travelling via a fresh-faced brotherhood – oh, and those Robert Plant vocals.

Not to be missed because: following a recent sold-out UK tour, Greta Van Fleet are settled firmly on the tips of the tongues of every leader and devoted disciple in the rock industry – including Robert Plant himself, who labelled them as “Led Zeppelin I”.

Expect: showers of flowers thrown from the stage by frontman Josh Kiszka; spectators closing their eyes to fully amplify the “jheez, he really does sound like Robert Plant!” revelation.

Shinedown (AKA ‘The 21st Century Chameleons’)

Known for: adapting to the ever-changing climate of 21st Century rock to maintain their multi-platinum selling formula.

Not to be missed because: holding third place to Van Halen and Three Days Grace in the number of #1 singles in the Billboard Mainstream’s Rock charts, Shinedown are quite the sensation. With a frontman who has HEAVY half-convinced that he holds two sets of lungs and mechanically-fortified vocal chords, Shinedown sound as powered-by-Zeus live as they do on record.

Expect: tears to be jerked from eyes by the hauntingly poignant “Second Chance”.

Where: The Avalanche Stage

Not to be missed because: the kind of band many a teenager once dreamed of unleashing in their garage, Milk Teeth are a happy reminder of music that encompasses true grit, but is also reminiscent of pubescently-minded times.

Expect: spectators to grow younger before your very eyes.

Wayward Sons (AKA ‘The Re-Birthed Ones”)

Known for: being the means of a new lease of musical life for Little Angels‘ Toby Jepson.

Not to be missed because: Wayward Sons have breathed revivification into 80s rock, blowing off all cobwebs with their fiery stage presence and dusting the 80s sound with a glint of 21st century edge.

Expect: murmurs of storytelling from those who witnessed Donington in its Monsters of Rock era.

Thus concludes our colourful spectrum of artist picks this year.

However, Downloaders are not only to be treated to three days of music that culminate in sets from Avenged Sevenfold, Guns N’ Roses and Ozzy Osbourne. Taking a stroll across the grounds of Donington Park, Downloaders will encounter WWE NXT stars such as Aleister Black, Kairi Sane, Adam Cole and Nikki Cross going head-to-head in the ring, as well as the more archaic, full-contact medieval battles carried out by Demolition Download.

More still, if you’re feeding off of the musical line-up doesn’t quite satiate you, club nights and performances from the Circus of Horrors will be held in the Dog House, whilst The Side Splitter Stage will host an abundance of drôle humans performing stand-up and musical comedy.

We’ll see you there! 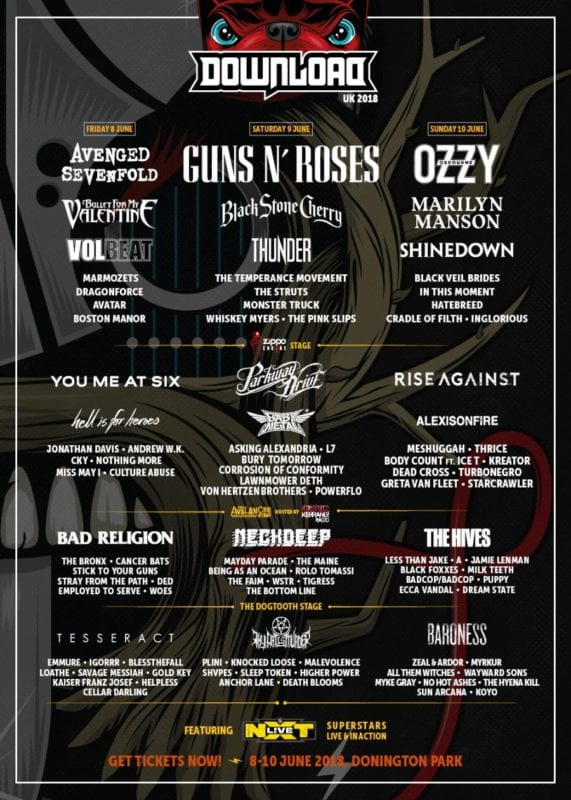