Preparing For War with SEVENDUST 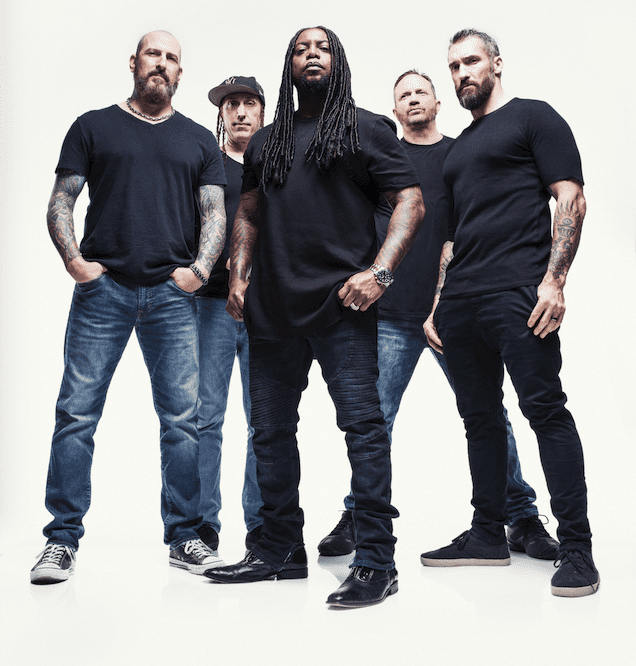 “It was only Morgan (Rose, drums) and John (Connolly, guitar)… there wasn’t a band yet”, recalled Sevendust vocalist Lajon Witherspoon of his first introduction to what were to become his bandmates for the next 25 years. “They came to a bar I was working at – and this is a true story – and it was Morgan, John and Vinnie (Vince Hornsby, bass) and John had never played the guitar, he was a drummer, he never even had a guitar strap! (laughs) They said man, we really love what you do and I used to always go and see those guys jam – except for John, he was in Piece Dogs and played the drums for them. They were signed to Energy Records so I was already impressed with him, he was a signed artist already, but he never played the guitar so that was a little bit weird (laughs). It was great and Vinnie and Morgan were in the band Snake Nation and they almost got signed by RCA records but the A & R guys signed Dave Matthews instead – which I think was a great move for him (laughs). So these guys showed up in a spot I was working at and I was playing on a Monday night in a little band I had and they said they’d really like to get together and to come down to the rehearsal place but it wasn’t a band. It was just us jamming and that’s what started it. That’s what started the seed of Sevendust right there, in that room and we wrote Black and we wrote a song called Crazy and we were so excited about this little band that we had that we went out to a local bar and we just jammed and everyone showed up because they knew us from previous bands and we only played those two songs and they asked us to get up there again so we played the same two again (laughs). We rocked it, man, so it was like, we have to put a band together and that’s what we did; that’s where it started”.
Rising from the Atlanta music scene in 1994, Sevendust garnered their reputation the old fashioned way through relentless touring and taking their music to the masses. So much so that Witherspoon jokes that fans in their hometown weren’t sure whether or not the band had fulfilled their dream or merely faded into the shadows of many others that had followed the same path.

“We were just on the scene in Atlanta”, he laughed. “That was the only place we ever played and then we got a record deal and I remember leaving from the Midtown Music Festival and we never went back to Atlanta for a year or two because we were on the road. It was like we got thrown from our home scene to the world. It was like wow, we’ve left Atlanta and never went back. I don’t think they ever realised what we were doing out there on the road because we’d been gone so long (laughs). We’d really been working and paying dues – and we still are – but we went out there in a van and toured the world and went from a van to several vans to several R.V’s! One time I remember the bus pulling up and we all said wow, all our rock and roll dreams have come true but in reality, the nightmare had just begun. We didn’t know that yet but (laughs). It’s been an incredible journey. We started in Atlanta with bands like Sunk Mojo, and The Black Crowes were coming out of there but we weren’t really that big yet. We were growing. We knew that we had a good thing going on and once we hit the road it kind of hitman and we just never stopped”!
Sevendust released their self-titled debut in 1997 and while it is widely respected now hardly set the music world on fire then, selling poorly in its first week. Rather than let that dampen the young band’s spirits, Witherspoon says that the members were largely oblivious to the fact it had failed to ignite.
“No way, no way”! he reiterated when pressed if it was an issue. “Not for me. I was 21 years old, I had a record deal, we didn’t care about the numbers. I don’t even… not even today. It’s still just an honour to be relevant in the music business when it’s so crazy and you can be here one minute and then you’re gone so for me it’s that same feeling of I’m still here, you know? I really didn’t look at the numbers back then. I don’t care about them. I just felt wow, we’re signed, we’re touring the world and going to places we’ve never been before and people were singing our songs back to us! We were on Ozzfest all of a sudden with Ozzy and Lemmy from Motorhead was my buddy. That was what I was thinking about back then and getting back in the studio and making another album. Back then we didn’t care about what was going on in the business, we just cared about the art”.

In 2004 Sevendust put out what was at the time a groundbreaking release from a metal band. They recorded and packaged a live DVD/CD set named Southside Double-Wide: Acoustic Live from a show recorded at the Georgia Theatre in Athens. It was ambitious, innovative, and risky, showcasing a softer side to the band and their music that ran the risk of alienating their diehard metal fans. It was a sign of a band at the peak of their powers, unafraid to bare their musical soul, and was to become a worldwide hit with both hardcore fans and those seeking something a little fresh and adventurous.
“That’s something we come back to from time to time”, Witherspoon shrugged. “A lot of the time a song starts with an acoustic guitar when jamming and it was really cool to show people we could be under the microscope and jam and still bring the same energy to the acoustic set that we bring to the live set. That was something that we captured then and something we capture now whenever we break out the acoustic. We did another acoustic album years later, but it’s something that we feel is important. Especially for me, because doing this allows me to showcase more of my vocal ability and to sing more and not necessarily sing over the guitars and the loudness. It brings it down. We’re still doing a heavy song but you can hear it (laughs)”.
That same year original guitarist and backing vocalist Clint Lowery left the band to play with his brother Corey in Dark New Day. Although the split was amicable and Lowery was to return four years later, Witherspoon admits that musically the adjustment was difficult.
“That was a weird period for us”, he reflected, “because that’s our brother and for me, I loved writing with Clint but for us, I think… we continued. It was something that made us work harder and we had our brother Sonny Mayo from Snot there for a while and it was a great opportunity for us all and for him too and it was a pleasure to play with him but like anything I think when you leave home sometimes you’ve gotta come back and I felt that was what happened. When Clint came back to the band for me it was the missing link that we needed back, even though we didn’t stop. For me, this band is the original band. The guys that started it and are still here. There’s a certain air about it when we’re all together in a room writing music that is like no other”.

One of the strengths of Sevendust, particularly in the live arena, is the passion and emotion exuded by their enigmatic frontman. Witherspoon not only gives voice to the songs that have nurtured Sevendust, but he also feels them. It is not uncommon for him to be seen on the brink of tears during their performance, unashamed to let the essence of the music shine through in his actions.
“Oh man, it gets emotional just thinking about it when you ask me the question”, he managed, obviously choking up at the thought. “It’s my serenity. When I’m on stage it’s a place where I go and feel from the soul. I feel the energy from the people and I get emotional because I can look out and there can be one person in the crowd that is looking at me and I can see the effect and what’s going on and maybe it’s even something going on in their lives. You can feel that pain or that energy. It goes both ways, any time. You never know what can spark emotions and it’s a rollercoaster ride of happy, sad, exciting – it’s every emotion that you can possibly feel and fit in your body on that stage for me and I love it every time I go on it”.
Sevendust returns to Australia this April on the back of last years album All I See Is War, an album which many critics believe harks back in sound to the early days of the band.
“It’s crazy”, Witherspoon enthused, “because the first thing the producer said when he came in was to listen, you guys don’t need any help so let me know if I can do anything and it was just like he was policing things. He said I want you guys to just be Sevendust. Let’s go back to the old sound. Let’s not get crazy and that’s what we were able to do with him. I guess with any artist you want to grow and expand but it wasn’t hard for us just to be Sevendust and I think we were able to – not on all of the tracks – but on some of the songs we got that old feel back and it was really cool to do that”.
It is not uncommon for fans – especially those from the beginning – to demand each new album has some sort of throwback to earlier releases, but Witherspoon agrees that what gets lost in the cries is the fact that it is not quite so easy to replicate a period and feel that was captured in a time when innocence was the best virtue of their chosen artist.
“It’s not easy at all”, he shook his head. “You want to evolve and you want things to… especially as an artist you’re your own worst critic and you definitely don’t want to keep doing things the same. I’ve always felt that Sevendust is Sevendust and we’ve never really gotten away from that Sevendust sound. On this album, we were able to get back to a more… the familiar side of it”. 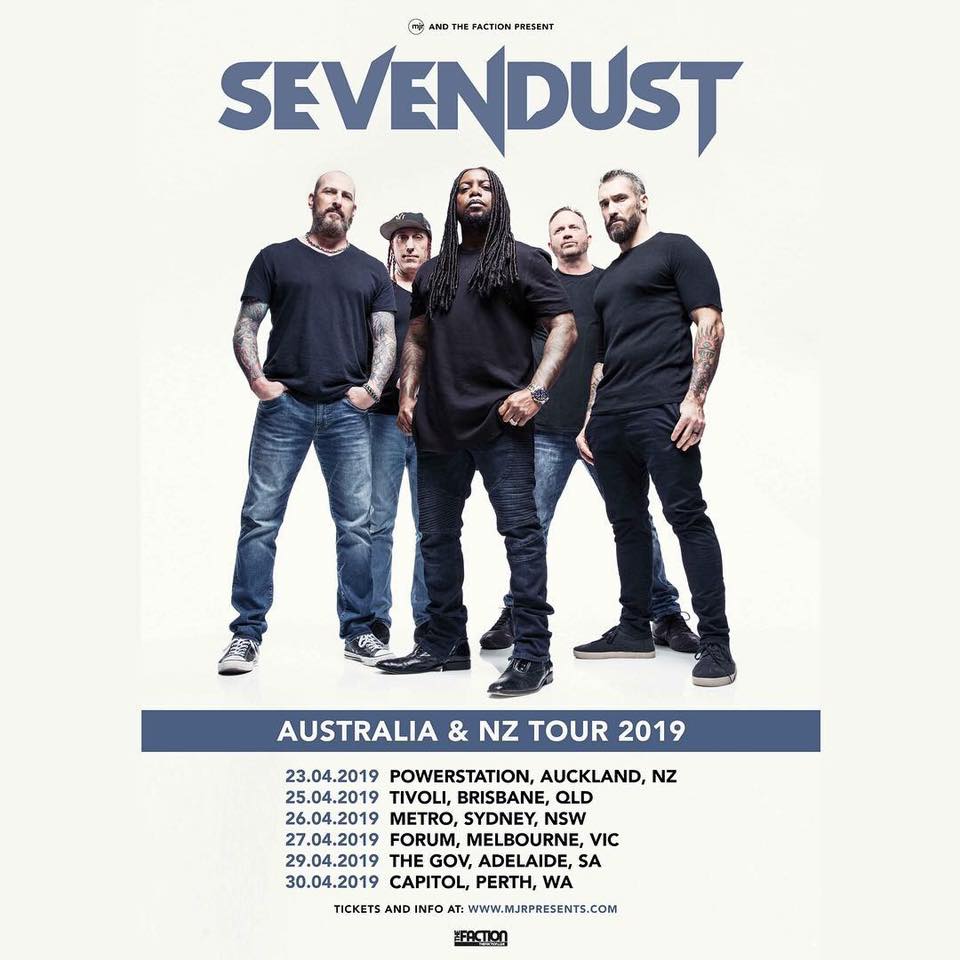