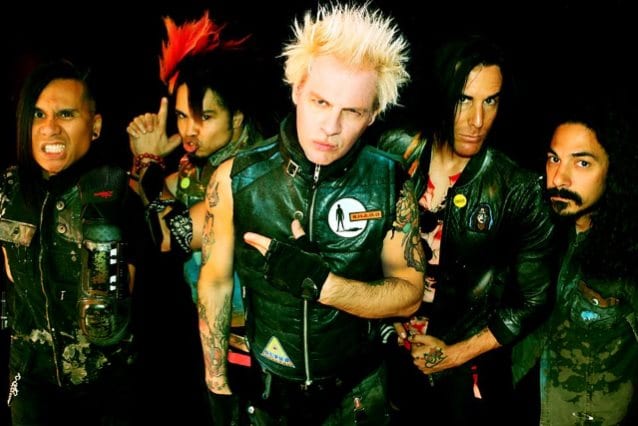 Powerman 5000 releases the official music video for “Sid Vicious in a Dress,” the first single off the upcoming album, New Wave, available worldwide on October 27, 2017, from Pavement Entertainment. The video depicts the ultimate rebel girl, who embodies Sid Vicious in spirit and encounters the band in a gritty nightclub. She turns everything upside down wherever she goes, refusing to back down to anyone.
On the concept of the video, vocalist Spider One says, “Visually, I wanted the video to feel like we stepped back in time, got transported back to the Rathskeller in Boston or CBGBs. Basically, a dirty, smelly claustrophobic mess.”
Spider further discusses the meaning of “Sid Vicious in a Dress”: “I suppose at its simplest it’s a twisted love song, but really it’s about loving what hurts you, what is bad for you. Staying when you should run. Over the years, Sid Vicious has become the poster child for chaos and self-destruction. I just took that and put it in the form of a beautiful girl. The title of the song kind of says it all.”
Spider stresses the spirit of the music video, stating, “It was very important to not to let this video become a typical rock and roll bad girl cliche video. This is not a lap dance video. This is violence!”
The track is one you’ll want to put on repeat, assuredly becoming an anthem for twisted love, mayhem, and rock and roll anarchy. It will leave everyone who hears it singing along to its unapologetic refrain, “You’re a mess! Sid Vicious in a dress!” Keeping true to the very spirit of Sid himself, Powerman 5000 once again delivers an album on their own terms.
New Wave available worldwide October 27, 2017.