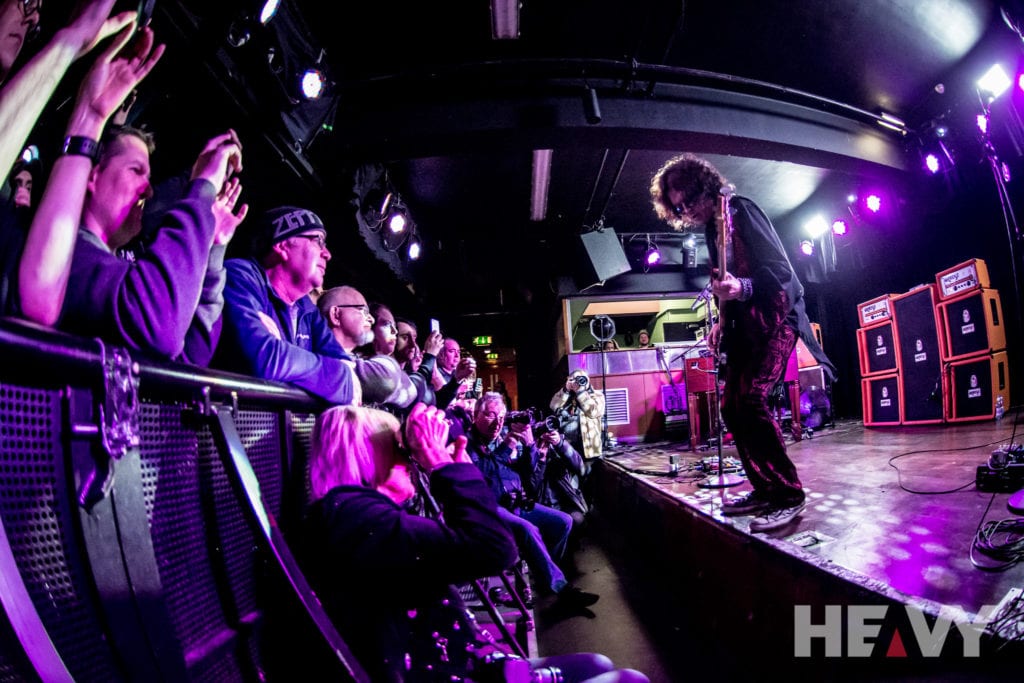 [vc_row][vc_column][vc_column_text]Glenn Hughes was originally set to tour in support of his new album ‘Resonate’ last year, however, due to the co-headliner Living Colour booking a conflicting support slot, the UK/European tour was cancelled and rescheduled for January and February of this year.

Currently on tour with his band of brothers, consisting of Søren Andersen on guitar, who also co-produced ‘Resonate’ with Glenn, Pontus Engborg, who’s been beating skins for Glenn Hughes since 2010, and finally Jay Boe on the Hammond Keyboard. Tonight Glenn Hughes and his boys are playing to a packed Manchester Club Academy, with support from Midlands band Stone Broken.  Stone Broken played a blistering 30-minute slot, which really got the crowd warmed up nicely before it was the turn of ‘The Voice of Rock’, and his boys, to entertain the masses. Check Stone Broken out, they are a band to watch out for in the future.

With the masses now nicely warmed up, and with a sense of eager anticipation in the air, Glenn Hughes hits the stage to ‘Flow’, from the latest album ‘Resonate’. What a track to open tonight with. Chugging guitar riffs from Søren Andersen, combined with the Heavy bass sound from Glenn, you already get the sense that it’s gonna be one hell of a night. Right from the go, it’s apparent that Glenn and the boys gel well as a band. The ‘Voice of Rock’ looks at complete ease playing with his band on stage, and at the same time, as I’m thinking this, I along with many of the crowd tonight are grinning, watching Glenn Hughes band mates looking across the stage, all three smiling in unison, watching Glenn Hughes belting out the most ridiculously awesome vocals, combined with his effortless, melodic, and stupendously amazing bass playing.

The classic Hughes/ Thrall song, ‘Muscle & Blood’ up next, which then leads nicely into ‘Gettin Tighter’, with Glenn Hughes laying down some funk on the intro. Søren Andersen looks like he is in awe of the man as he watches Glenn Hughes giving a master class in playing bass. Both Andersen and Hughes feed off each other, and pardon the pun, couldn’t ‘get any tighter’ if their lives depended on it. The late and great Tommy Bolin would have more than approved of Andersen’s wizardry in the execution of ‘Gettin Tighter’, on his axe. The crowd at this point were well and truly hooked, affirmed by the banging of heads all around.

Glenn Hughes and his band continued to wow the crowd throughout the night, with songs like ‘Stumble & Go’, another heavy sounding belter of a track, from the latest ‘Resonate’ album, through to classics like Trapeze’s ‘Medusa’. Hearing ‘Medusa’ live, really did have the hairs on the back of my neck standing up, probably along with everybody else’s. An atmospheric track, the dynamics of ‘Medusa’ takes you on a mystical musical journey, far and beyond. Then, of course, the guitar solo by Andersen kicks in. You can see why the likes of Joe Satriani rates Søren Andersen so highly.

‘The Voice of Rock’ introduces ‘You Keep On Movin’ as the song he wrote with Coverdale. He tells the crowd to “celebrate life”. Informing the crowd, later that night, his mum was ill and that sadly it wasn’t looking good, was a testament to the man himself, in that the show must go on. The ‘Voice of Rock’ offering his words of wisdom to the animated crowd, became ‘The Voice of Hope’ that night. ‘You Keep On Movin’ was always going to be a crowd favourite, and tonight was no exception, with the crowd singing and applauding throughout.

What I loved about Glenn Hughes was his sense of humbleness, apparent in how he interacts with the crowd. You’ve got to remember, this isn’t just any old rock star, this is ‘The Voice of Rock’ himself. The same giant of a man who has his name inked in the musical history books, having been in bands like Deep Purple, and Trapeze,  etc.

The show ended with ‘Heavy’ from the new album and Purples classic ‘Burn’. Both songs, as throughout the night, saw Jay Boe flawlessly knocking out some killer Hammond tones, whilst Pontus Engborg grooved the hell out of every inch of his drums.

Glenn Hughes and his band tonight were nothing short of remarkable, to which it will be one of those rare performances that will stay with me forever.