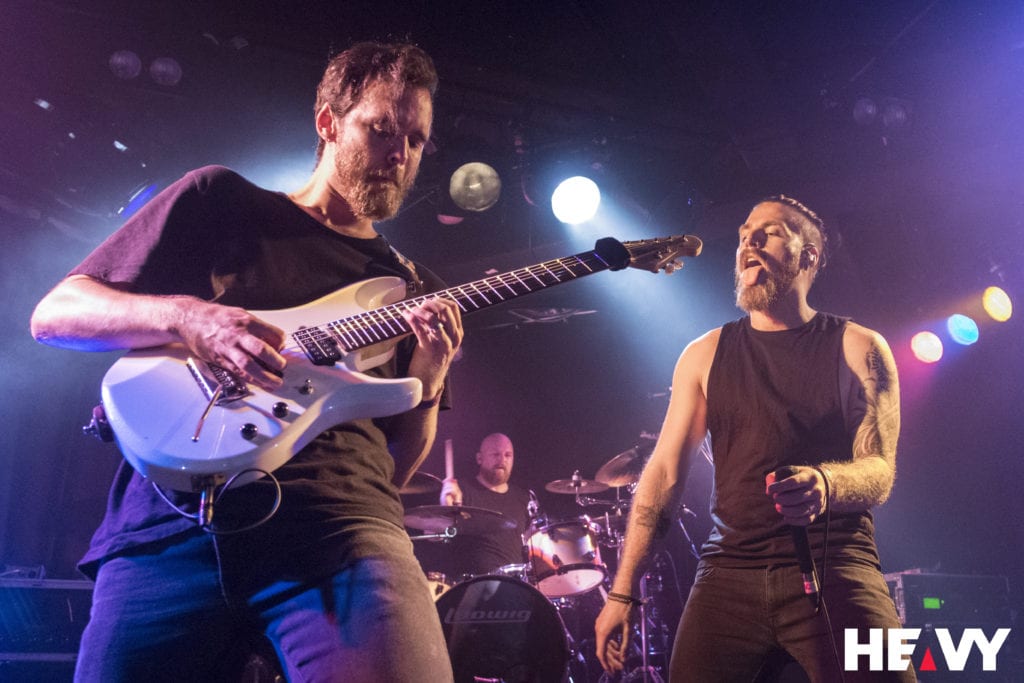 There’s not much that could be said about Australia’s progressive music since than the fact that it is one of the most formidable and incredible scenes going around these days. The (almost) annual heavy progressive music extravaganza Progfest has come, and along with comes a sold-out crowd gathered within the iconic Corner Hotel. Across two stages, nine hours of grooves, hooks and riffs are set to envelope all those enclosed with its vicinity.

A mere half an hour into the commencement of the event, Melbourne’s own Enlight open proceedings on the ‘Ice Stage’. A magnificent display of female-fronted progressive rock with harsh undertones of distorted vocals provide a level of equilibrium of aggression and serenity. Whilst only less than a year from their debut EP ‘Voices’, Enlight have set the bar incredibly high for the remainder of the night’s acts.

Over to the main stage – the aptly named ‘Fire Stage’, Qlaye Face make their melancholic presence known to the crowd. Whilst there is little in terms of dynamic change within their sound, Qlaye Face use their consistent serenity to soothe and calm the audience. Providing a beautiful contrast to what will follow, Qlaye Face’s set was a perfect collection of low-tempo bliss.

Back over the to ‘Ice Stage’, post-rock instrumentalist Bear the Mammoth provide a dynamic approach throughout their set. Incorporating elements of doom to their sound, Bear the Mammoth cascade their tones and provide dynamics that enthral and surprise. Look at the first three acts of Progfest so far, it’s safe to assume that the night’s artists have stepped up their game to a world-class standard.

Provide an incredibly direct approach to Progfest’s proceeding, Figures have taken every sense of calm and serenity and completely gotten rid of it, with their relentless alt-rock grooves pounding the ears of every member of the audience. Vocal harmonies and solid riffs aplenty, Figures have turned the heat up several notches.

Whilst every act on the line-up is unique in their own way, it’s safe to say that Dyssidia are one of the most one-of-a-kind bands to every come out of Adelaide. Their atmospheric, yet somewhat tech-inspired approach to progressive metal is well received by every individual member of the audience. The complimentary orchestral elements to the insane vocal delivery is met with virtuosic instrumentation of every band member, and it’s utterly glorious.

Back over to the main stage, fan-favourites Orsome Welles give Progfest was it to be considered on the most entertaining and eye-catching sets of the entire night. Remaining classy in their formal attire, Orsome Welles use their quick-strike riffs to provide ample amounts of snap within their sound, which only felt more complete with the addition of almost jazz-like vocals. A live set that keeps getting bigger with every addition to their repertoire, Orsome Welles have found an approach to prog-rock that no other band has achieved.

The side stage saw Transcience deliver a rather rough start to their set, but like true professionals, regain their momentum and display their intense modern sound to thunderous applause. Drawing inspiration from progressive music’s most iconic acts, most notable in their sound being Dream Theater, Transcience’s sheer grand delivery of their music has won me over.

On the other side of Australia, Perth holds some of the great hidden gems in our heavy music scene, and none exemplify that statement more than Chaos Divine. Anthemic in nature and powerful in delivery, the Perth natives leave jaws on the floor which the word “Underrated” echoing throughout the crowd.

It took a certain level of un-chained insanity to break the standard set by the unbelievable quality of tunes throughout the night, but that break came with Melbourne’s own “Street Dogs” Alithia. Their self-described genre of “Astral Space Core” is one that fit their approach to progressive rock perfectly. It’s here we see the first drop of a passionate crowd drip in, as mosh pits form for the first time around the ‘Ice Stage’, much to the amusement of the band. I must admit, seeing Alithia before, I was quite understood what the fuss was about with this band, but now I feel like an absolute fool after seeing such a magnificent display of musicianship.

Providing a direct contrast, Circles took to the stage with fervour in their hearts and fire in their eyes. Pure adrenaline rushes through every member of the band as their extremely heavy instrumental sound collides with vocalist Perry Kakridas’ dynamic and powerful pipes. For many, this was regarded as the set of the night, and it’s no surprise to see why – pure intensity from start to finish.

Closing the ‘Ice Stage’, We Lost the Sea enthral and mesmerize with their instrumental post-rock brilliance. Whilst creating a rather divided opinion from the crowd, those that fall into the trance of We Lost the Sea’s magic, myself included, were astounded at the level of simplicity within their technical approach, yet somehow managing to work in dynamics that flow between each member of the band to provide a cascaded sense of wonder that felt truly massive.

Like all great things, they must come to an end, and headliners Caligula’s Horse gave Progfest one it’s greatest send-offs I’ve ever seen in a festival. Showing no signs of fatigue, the now-packed out crowd give the Brisbane boys enough energy to feed from for the entirety of their one hour set. From the monstrous 16-minute long track Graves to their magnificent encore performance of Water’s Edge, Caligula’s Horse remind us all what makes our national progressive music scene so world-class. I couldn’t think of a better way to conclude Progfest 2016.

There’s not much else that can be said besides that the organisers of Progfest 2016 have chosen 12 bands that are not only incredible live musicians, but have a world-class sound that is all their own. Not a down point at any moment of the night’s proceedings, I’m leaving The Corner Hotel in utter amazement at how flawless Progfest 2016 is.