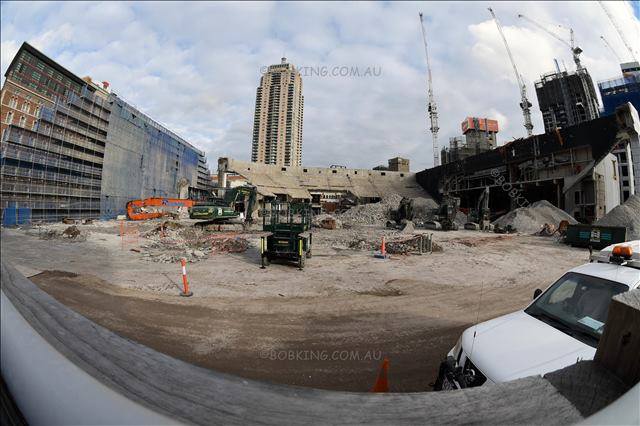 [vc_row][vc_column][vc_column_text]Bob King is one of, if not THE, most experienced music photographers in Australia’s musical history. He’s been everywhere and captured it all. Read more at:

If you ever lived in Sydney, you would most certainly have seen one of your favourite bands entertain you within its cosy area walls.

May are calling it a sad scene. We at HEAVY would rather celebrate all of the greatness it bought us.

Thanks, Bob. You’re a legend mate.

Here’s a brief history of the SEC from Wikipedia:

Haymarket, Sydney, Australia. It opened in May 1983, to replace Sydney Stadium, which had been demolished in 1970 to make way for the Eastern Suburbs railway line.

It was one of Sydney’s larger concert venues, licensed to accommodate over 13,000 people as a conventional theatre or 8,000 as a theatre-in-the-round. It was the largest permanent concert venue in Sydney until 1999, when the Sydney Super Dome opened at Sydney Olympic Park. The venue averaged attendances of 1 million people each year and hosted concerts, family shows, sporting events and corporate events. Demolition began in January 2016.

Bob King’s career as a pre-eminent entertainment photographer commenced in 1964 when he captured images of the Beatles at Sydney Stadium. Over the decades since he has shot virtually every visiting concert act of consequence and a dramatically wide spectrum of Australian entertainers.

Though The Australian Magazine said of him in a 1989 profile, “To the crowds at Sydney rock concerts King is almost as familiar as the exit signs,” he has pursued his unique craft well beyond the Harbour City – as tour photographer for AC/DC, Mick Jagger, Barbra Streisand, Bon Jovi and INXS/Jimmy Barnes. He has focused his lens upon the Who in London, Peter Gabriel in Moscow, Jason Donovan in Jakarta and Bananarama in Hong Kong and along the way has covered a brace of rock festivals, feature film and music video sets, stage musicals, outdoor extravaganzas and more opening nights than he cares to remember. As well, he has shot record covers images for entities as diverse as Joe Cocker, AC/DC, Joan Armatrading, George Benson, Divinyls, Skyhooks, Saints, Radio Birdman and Barry White.

Having long ago mastered the art, so essential at a production on any level, of knowing – as one senior publicist has put it – ”where to be and, more importantly, where not to be”, the extraordinarily professional and adaptable King has earned respect and admiration from artists and industry principals. John Farnham, Australia’s arena concert champion, has declared: “I gravitate towards him because he makes me feel comfortable on stage. It’s like he’s part of the family.”

“These photographs surprise us with their honesty and astound us with their perception” wrote Glenn A. Baker in the Foreword to the book Rocklens. “Bob King’s photographs capture and distil the very essence of the performing art – the anxiety, the adrenalin, the intensity, the pain, the exhilaration.”