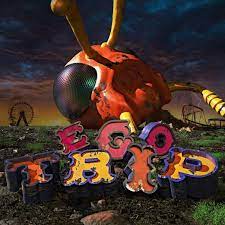 Cut my life into pieces, this is my last retort. That’s a lie, because I like to think I’m a bit of a witty cnut, having perfected the cnut part in recent years.

Anyway, if you got the reference in that horse shit attempt at humour earlier, you’ll probably know the name Papa Roach. If you don’t know the band name, I think you’ll at least know that song. It’s the only one of theirs that I know, even though I’ve previously been told they had another couple of hits under their belts. And 10 albums apparently …

From what I remember of them, these guys got slotted under the Nu-Metal banner around about the same time the genre took a nosedive into the dirt thanks mostly to Fred Durst’s ego trip, but also due to an influx of generic bands in a genre that in its infancy was far from generic. I never pencilled Papa Roach as Nu-Metal though, even though they came out with a chart topper of the heavy kind right in the thick of it all.

Enough about the past, though, let’s see what Papa Roach have to offer in their latest serve Ego Trip. Oh, that spoken word intro was very Nu-Metal, very Snot even, then the riff, then the bounce. Haha, ok. It’s Nu-Metal, very Nu-Metal. Kill The Noise is the name of the track, and it’s got it all, rap, bounce, groove, melody, clean vocals and some weird samples bouncing in and out. Big track for an opener, bit of a Linkin Park vibe happening vocally in the choruses. That breakdown, though, ooft!

Alright, the second track Stand Up goes straight up hip-hop, and I’m thinking, fuck, that’s brave. Not as brave as taking it into a pop verse, though, followed by some banging Nu-Metal bounce. Dare I say, it’s a bit too fucking hippity hoppity for me. Weird track, fuck it, I’m moving on.

In another brave twist, Swerve kicks off with an acoustic intro that morphs into a heavier distorted version. Then we get some more hip hop. At this point, this album is reminding me of something by Hed (P.E.) or N.E.R.D. It’s all over the place, There’s even a fucking saxophone in there.

Fuzzy bass, I always love a bit of fuzzy bass. What the actual fuck though, this is another weird ass hip hop, rock, pop mash-up of a track. I don’t dislike it, I just can’t figure what page this band is on at any given moment. The track is titled Bloodline.

Liar continues with the hip hop, but it does open up to a chorus which sadly reminds me of something by My Chemical Romance or Panic At The Disco. Embarrassingly, I have to admit that it’s a catchy as fuck tune. How very fucking un metal of me.

Title track Ego Trip kicks off with a rocking fuzzed out bassline, and as the vocals kick in it feels like we are about to get a little more of the heavy which the band showed in the opening track. Distorted guitars jump in and out between the rapped versus, bridges and pre-choruses, and they help us build into the melodic but bouncy choruses. They could probably do with following their own lyrics and never get high on their own supply. Experimental, yeah, let’s go with that.

Unglued, that’s a pretty good definition of this album, and the name of this next track. It’s very, very classic Nu-Metal, that real generic kind where the genre ended. Maybe a little more loaded with rap than the chart-topping stuff that flooded the market at its death. Credit where credit is due though, these guys are doing it real fucking well.

Next up is Dying to Believe. This song has got away from me while I was typing those last few sentences, but fuck me, it’s an absolute fucking banger. I’d almost call it a single except the bridge is heavy as fuck and probably wouldn’t make it into the mainstream. But, this isn’t the mid 2000’s, and Nu-Metal is no longer unfashionable. Yeah, I said it, Nu-Metal is back.

Killing Time is one of my favourite Nu-Metal tracks, from one of my favourite Nu-Metal bands ever. Not this one though, that one belongs to Hed (P.E). This one goes alright though and is packing some straight up Linkin Park vibes which we’ve heard earlier in the album. This album is actually getting and better as it rolls on. I’d probably skip tracks 2 to 5 though if you’re not into your hip hop.

It’s that time, acoustic fucking ballad time. And no, very sadly it’s not a Belinda Carlisle cover.. It is called Leave A Light On though, and it’s a bit fucking soppy. Nice track, will probably get some airplay.

So might the next track Always Wandering, it’s a bit of a pop song. It does get kind of heavy through the choruses though, with some big clean vocals and some big bouncing guitar riffs. Rinse & repeat, rinse and repeat. Heavy pop song would best describe this offering.

These guys don’t have to say they are sorry, I get it, the time has come to let the past be the past and just put out an album that you want to put out. Limp Bizkit just did it, so why the fuck shouldn’t Papa Roach. At least this one hit the 40 min mark or thereabouts. If you liked the latest Bizkit, you’ll probably take some solace in this with the early hip hop offerings it served up. No Apologies isn’t hip hop though, it’s far from it. It’s a modern rock song.

Cut The Line follows suit, expect it is a little heavier. Some of these choruses remind me of the likes of homegrown Aussie bands Dead Letter Circus and Karnivool, a sound which has actually poked through in this album earlier. Very eclectic mix of styles throughout the album. This is a band not afraid to experiment. This is a big track, if not the biggest track on the album.

Have they left the best ‘til last? Let’s see shall we …

Bouncy, very fuckin bouncy! And there’s those Aussie prog vibes again, the heavier side of it that is. I Surrender, big track again, big big track. Too early to tell if it’s the best, especially after that last banger, but the groove in the main guitar riff has definitely tickled my fancy. Then a clean interlude kicks in, oh wait, that’s the end of the track. Ok, not where I thought that was going. That song could have been way bigger than it was.

Well, fuck! Nu-Metal is back baby! But we knew that, The Violent Inzident told us all that last weekend. If you’re a grandmas basement metal elitist, you’ll fucking hate this album. If you’re fourty something and want to relive the glory days of the late 90’s and early 2000’s you’ll probably listen to this on repeat, spike up your hair and reconnect ya wallet chain. Don’t lie, we all know you’ve still got it!

It’s good, I rate it! Get some Nu-Metal into ya!