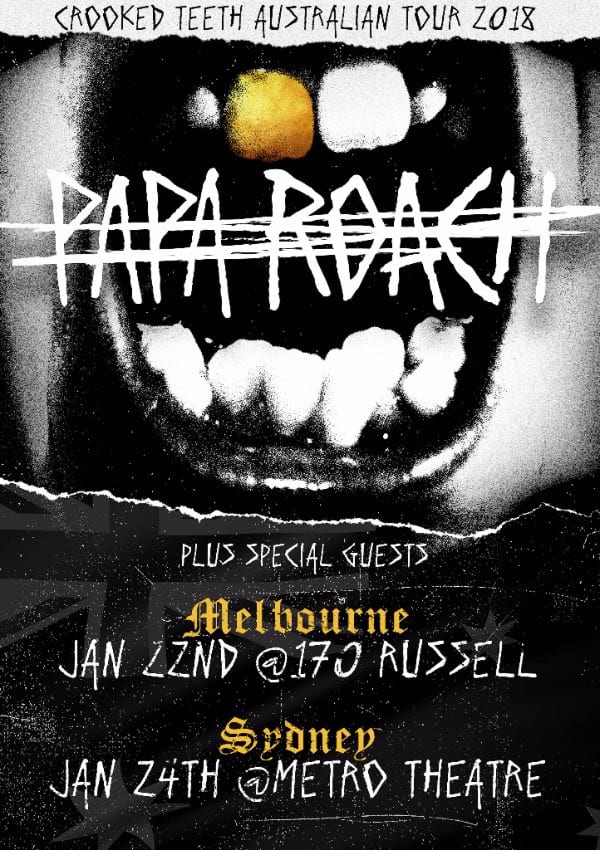 Papa Roach have performed previously on Australian shores in 2002 as support to Red Hot Chili Peppers and returned again for Soundwave 2015.

Papa Roach released its 9th studio album May 19, 2017, to critical acclaim with the lead single HELP a global top 10 hit and American Dreams currently #3 in the USA Rock charts.

The band is currently on a sold out headline tour of Europe and they are excited to see their Aussie fans for the first time for their own headline shows.

Papa Roach has released 20 top 10 hits in their home country including Last Resort, Scars, Forever, Face Everything and Rise, Gravity and HELP.

Commenting from Europe, lead singer Jacoby Shaddix said, “this is the first time we have been able to bring our show to the people of Australia. We know that Aussies are some of the best fans in the world and we have not been able to tour there as much as we had hoped but our label Sony convinced us that we had to come over and start the process to build our base and we are more than ready for the challenge. The internet has been a great tool and our fans are still finding us through youtube and now Spotify helping us regenerate our audience after nearly 20 years as a band. Our streaming numbers are pretty undeniable and they are growing rapidly.”

** As an exclusive offer for Papa Roach fans, and in partnership with JBHifi.com.au, Purchase one of the following standard CD editions of ‘Crooked Teeth’, ‘F.E.A.R.’, ‘The Connection’ or ‘Time For Annihilation’ exclusively online at www.paparoachaustour.com and receive the following:

The tour is presented in association with JB Hi-Fi.
Tickets & more information available from:
MONDAY 22 JANUARY 2018  – 170 RUSSELL, MELBOURNE
Tickets will be available from http://170russell.com/

PrevPrevious.New Justice League Trailer Lands
Next.The X-Files Season 11… The Trailer Is Out There… Or HereNext