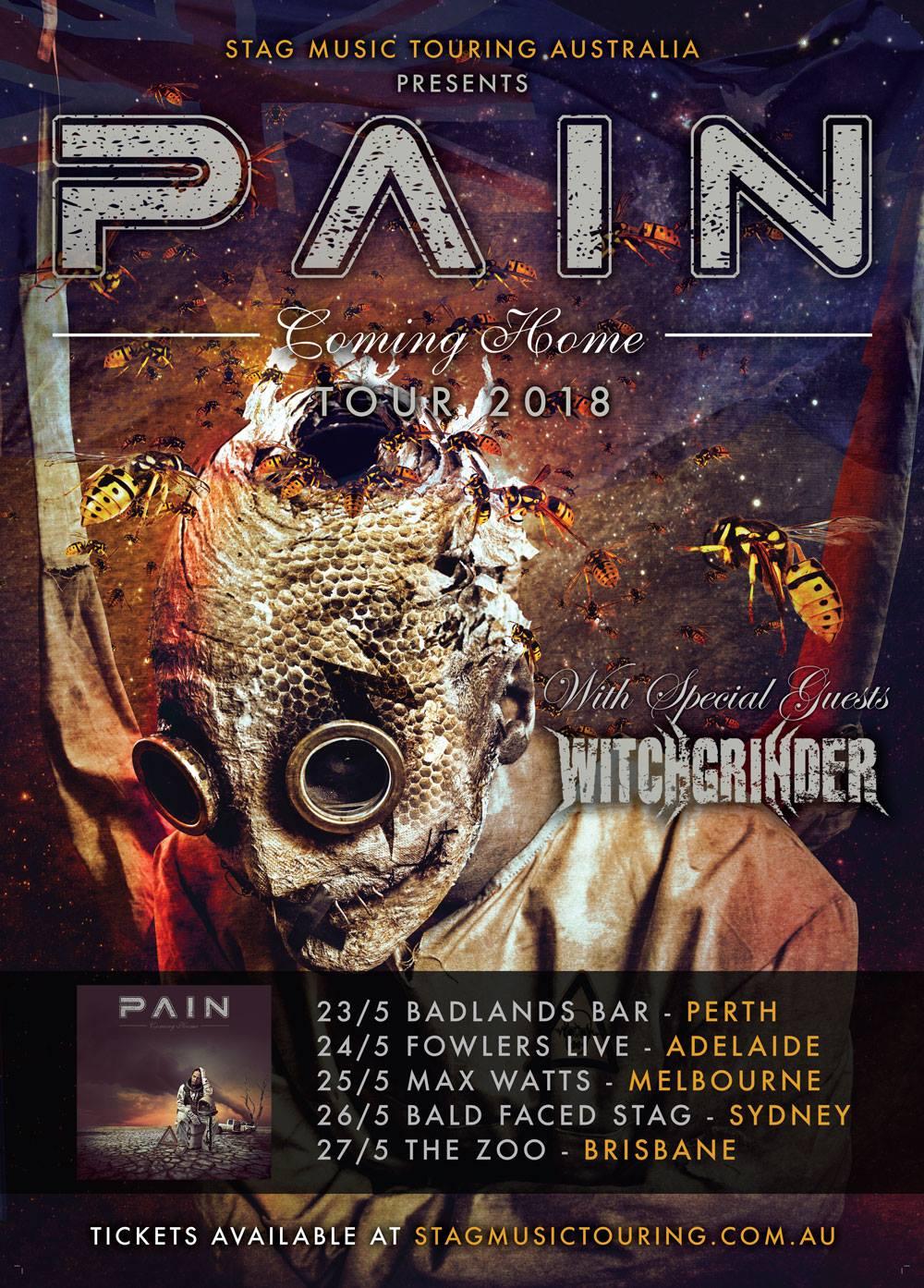 Swedish industrial metal titans, PAIN, will tour Australia for the first time ever in May 2018 in support of their eighth studio album, Coming Home (Nuclear Blast)
Led by one of the most iconic and legendary figures in the extreme metal world, Peter Tagtgren, PAIN will crush every capital city on the map.
Mixing metal with electronica and techno, PAIN has gone from side project to fully fledged wrecking ball since forming in 1997.
Pulsating beats and wall of sound guitars drive the PAIN sound, however it’s the atmospheric, orchestral arrangements and ambience that complete it.
Live, the band are unstoppable. Delivering an inescapable sonic assault that demands your full attention and co-operation.
Tagtgren is one of the most prolific people in the music industry. He is the front man for legendary death metal act Hypocrisy and owner of the iconic recording studio, The Abyss.
With over 100 album producing credits to his name, Peter is synonymous with Scandinavian heavy music.
In 2015 he also partnered with Rammstein front man Till Lindemann to release Lindemann which Peter describes as “a baby between Rammstein and PAIN… a mix of Rammstein vocals and PAIN music.”
Perhaps the never ending stream of album credits and his own musical output is the reason why PAIN haven’t visited Australian shores until now… But as Tagtgren explains, they can’t wait to be here!
‘We cant wait to play for our Australian fans. They’ll get 100% energy from us, we’re so happy to be finally coming!Please come to the shows and support us, cause we will give you all we got, on the last Europe tour, fans voted for the songs they wanted to hear, we copied the first 15 on the list and added a few more. Let us know what you want to hear!’
PAIN is completed by drummer David Wallin, bassist Jonathan Olsson and guitarist Greger Andersson
Special Guests on all shows are Melbourne’s Witchgrinder. Combining industrial rhythms with 80’s and 90’s metal markers and wrapping them in horror and sci fi centred lyrics,
Witchgrinder deliver an exhilarating live show via their commanding stage presence. Having shared the stage with Wednesday 13, Suicide Girls, Ghost, Hanzel Und Gretyl and more, they are the perfect appetiser for the maincourse.
TOUR DATES
Wednesday, May 23: Badlands Bar, Perth
Tickets: https://badlandsbar.oztix.com.au/?Event=81056
Event Page: https://web.facebook.com/events/767527180114935
Thursday, May 24, Fowlers Live, Adelaide
Tickets: http://www.moshtix.com.au/v2/event/pain-coming-home-tour-2018/100098
Event Page: https://web.facebook.com/events/128501874514089
Friday, May 25, Max Watts, Melbourne
Tickets: http://maxwattstickets.oztix.com.au/?Event=81493
Event Page: https://web.facebook.com/events/170981443484616
Saturday, May 26, The Bald Faced Stag, Sydney
Tickets: http://www.moshtix.com.au/v2/event/pain/100007
Event Page: https://web.facebook.com/events/1481238955328485
Sunday, May 27, The Zoo, Brisbane
Tickets: https://zoo.oztix.com.au/?Event=81526
Event Page: https://web.facebook.com/events/131643320927993
Local supports to be announced
Tickets onsale now!www.stagmusictouring.com.au
Coming Home is out now
nblast.de/PainComingHome
www.painworldwide.com
www.facebook.com/OfficialPain
www.facebook.com/stagmusictouring