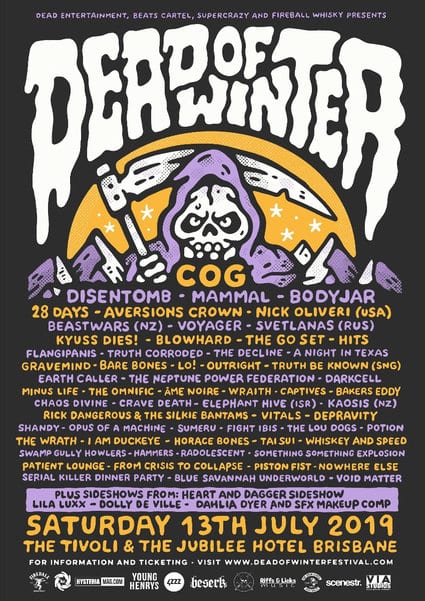 Queensland’s longest running heavy music and arts festival Dead of Winter has just dropped another 15 hard-hitting acts on top of what already is a ridiculously solid day of proceedings come Saturday July 13 at The Tivoli and Jubilee Hotel in Brisbvegas.

Celebrating ten years since its inception, every aspect of the much-loved and independent annual event will be levelled up in 2019, bringing punters the largest Dead Of Winter bill ever assembled with 61 bands and 4 sideshow acts featured over 6 stages, including the massive Tivoli main stage and two outdoor truck stages.

Dead of Winter returns to Brisbane on Saturday July 13 across numerous stages at The Tivoli and Jubilee Hotel in Brisbane’s Fortitude Valley.  General tickets are available through Oztix and Ticketmaster with full festival information and ticket links at  www.deadofwinterfestival.com.  The much-anticipated festival has sold out the last two years in a row… so get in early!