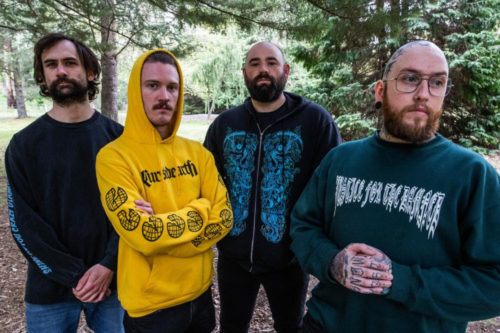 NICOLAS CAGE FIGHTER “Cast You Out”

Nicolas Cage Fighter prove that they are more than just a catchy name with their five-track EP Cast You Out.

The EP is relentless from start to finish, barely pausing long enough to inhale much-needed air into your lungs before delivering another knockout blow time and time again.

If you are a fan of the band – and if you aren’t what the fuck is wrong with you? – you would have already heard four of the songs that have been released with “Black Jackal”, Devil’s Head”, “Dead Ends” and “Exiler” already making their way onto the airwaves but that’s not to say this is a release where if you have heard the songs before the impact level is diminished.

The entire EP centres around mental health and associated issues but never once feels like a forced listen to the problems of another.

It is strangely inviting and comforting despite being as subtle as a sledgehammer to the temple and this is where Cast You Out finds it’s almost un-nerving charm.

Starting with “Black Jackal” the EP slowly, but deliberately, eases you in with a slow-burning build-up before exploding into a fist-pumping, headbanging wide-awake nightmare that will have you replacing the linings of your throat if you are brave enough to attempt to sing along.

Vocalist Nick Moriarty is on absolute fire throughout, his snarling, menacing vocals hitting harder than a Samoan backhand, while the remainder of the band seems to feed on his venomous intent in spades.

“Cast You Out” begins with a swirling of guitars that continues throughout and is a massive moshpit anthem that almost has you tasting the non-existent sweat dripping from the brow of the person (not) standing beside you.

“Devil’s Head” roars into life with Moriarty screaming “Get out of my head”, and at that point, you don’t know whether that’s his voice screaming at you or your inner voice pleading with him.

Such is the dynamic delivery of the subject matter it is easy to be swept along by the tide of emotion and if you weren’t in tune with or respectful of the plight of those suffering mental illnesses then by the time you finish with Cast You Out I guarantee you will have no choice.

“Dead Ends” again builds from a wall of swirling guitar notes that almost hypnotically draw you in before being pummeled by Moriarties vocals, with odd time signatures and breakdowns punctuating throughout.

Album closer “Exiler” is perhaps the most musically correct song on the EP but doesn’t suffer for its adherence to structure, continuing the aural assault before finishing and leaving an extremely satisfied yet still hungry for more taste in your mouth.

Nicolas Cage Fighter are not here to fuck around and if you survive this collection of five songs without clutching at your heart then you are obviously a fitter man than me. 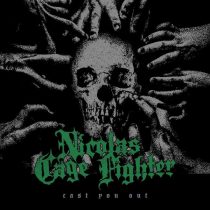