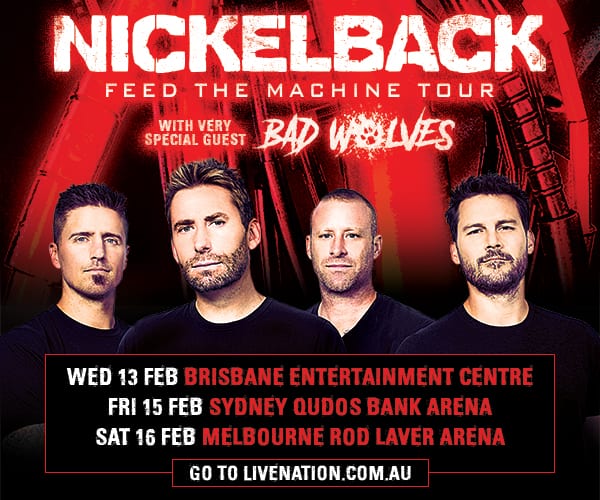 NICKELBACK are coming back to Australian with their “Feed The Machine Tour 2019” with very special guests, Bad Wolves!

Touring in support of their ARIA #3 album, Feed The Machine (out now through BMG), these will be Nickelback’s first Australian shows since May 2015. The multi-platinum-selling group will hit the Brisbane Entertainment Centre on February 13, Sydney’s Qudos Bank Arena on February 15 and Melbourne’s Rod Laver Arena on February 16 – with very special guests Bad Wolves.

Nickelback return to Australia with their biggest and loudest production yet, a high octane show of tracks from the band’s enduring nine-album body of work such as all-time classics, ‘How You Remind Me’, ‘Far Away’, ‘Burn it To the Ground’, ‘Gotta Be Somebody’ and more recent hits from their current album, Feed The Machine, such as ‘Song On Fire’ and ‘Must be Nice’.

My Live Nation members can also be among the first to secure tickets during the pre-sale commencing at 10 am Wednesday, October 10.

PrevPrevious.BEHEMOTH I Loved You At Your Darkest
Next.THE MULE Trailer LandsNext