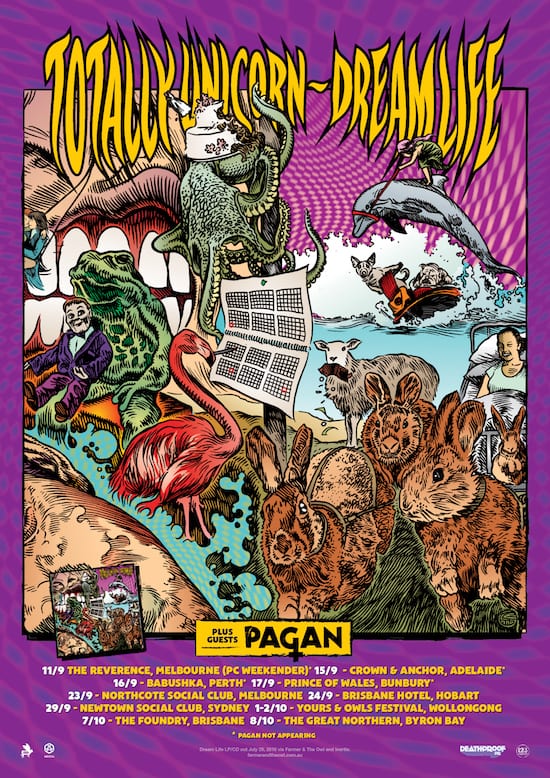 Sydney’s math-metal party smashers are all geared up to spread joy and madness, preparing to punch out a rowdy, presumably barely-clothed appearance around the country and the SOLD OUT Poison City Weekender Fest. Totally Unicorn are ready to grip the Australian music biz by it’s tipsy shoulders and shake it like a very dry martini at BIG SOUND Live. With three top-billed dates across three days which includes an appearance at the Deathproof x Crowbar pre-party, we predict plenty of raised eyebrows and elbow nudges.

In the build up to all this, the band has announced the supports for their shows in various cities. Melbourne’s newest Satan-worshipping attention-seekers PAGAN will appear on all dates, whilst other highlights of this pleasure parade include Adelaide ten-piece GOD GOD DAMMIT DAMMIT, the ruthless JACK THE STRIPPER for Melbourne, the fabulously named SHIT NARNIA in Bunbury, and Sydney metal merchants BARE BONES. The band have also scheduled party pitstop for Newcastle. The port city scores a boozy Friday night at the Cambridge Hotel with support from GRIM INDIA and JAMIE HAY.

The tour will see the band playing tunes from their debut LP ‘Dream Life’  which has been drawn almost universal praise from the music press for it’s deft handling of myriad influences and balanced party-hard yet self-reflective themes.

So do yourself a favour and grab a ticket to get weird with Totally Unicorn on the dates below.

Also, DO NOT MISS TOTALLY UNICORN AT BIGSOUND LIVE 2016…