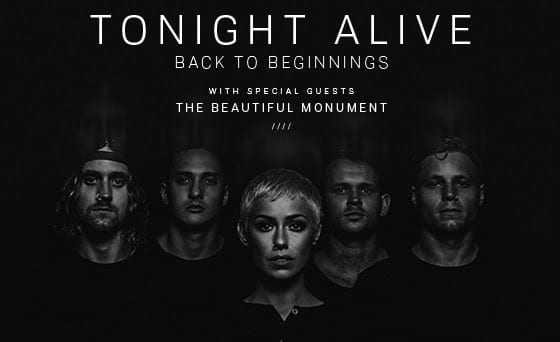 TONIGHT ALIVE are heading home and to celebrate they’ve announced a very special Australian headline tour. Kicking off on October 31 at The Basement in Canberra, this run of dates will see Tonight Alive go back to where it all began and revisit all the rooms they used to play when they first started. Joining Tonight Alive upon their return will be their new friends in The Beautiful Monument.

Tickets go on sale at midday this Thursday, June 8.

My Live Nation members can be among the first to secure tickets during the pre-sale beginning 10 am Wednesday, June 7.

Currently dominating stages at Slam Dunk Festival in the UK, the Back To Beginnings Tour comes off the back of the exciting announcement Tonight Alive have found a brand new Australian home at UNFD, where they dropped their latest single, “World Away”.

Last spied Down Under playing arenas with A Day To Remember in December 2016, Tonight Alive want to celebrate their homecoming by giving the next generation of Australian talent a leg up, but with a twist. Tonight Alive will be running a competition that gives local bands the opportunity to win the opening slot in each city on the tour. And the twist? To apply, the band must have a female member. For more information and to enter the competition, visit: Support Competition.

“We have toured with plenty of awesome bands around the world, and we’ve noticed more bands have female members and the number of women getting involved is growing too! The rock genre and music, in general, is male dominated for no good reason at all. Women are awesome and we want to celebrate that. So for this tour, we want to know who the best rock bands in Australia with female members are. We’re running a competition in each city to find new and exciting bands to open our shows.” – Tonight Alive

Tonight Alive is composed of vocalist Jenna McDougall, lead guitarist Whakaio Taahi, rhythm guitarist Jake Hardy, bassist Cameron Adler and drummer Matt Best. The voice of their generation and a force on the global music scene, Tonight Alive have released a trio of successful albums with The Other Side (2013) and Limitless (2016) debuting on the Australian ARIA Chart at #5 and #6 respectively.

TONIGHT ALIVE BACK TO BEGINNINGS TOUR

with special guests THE BEAUTIFUL MONUMENT