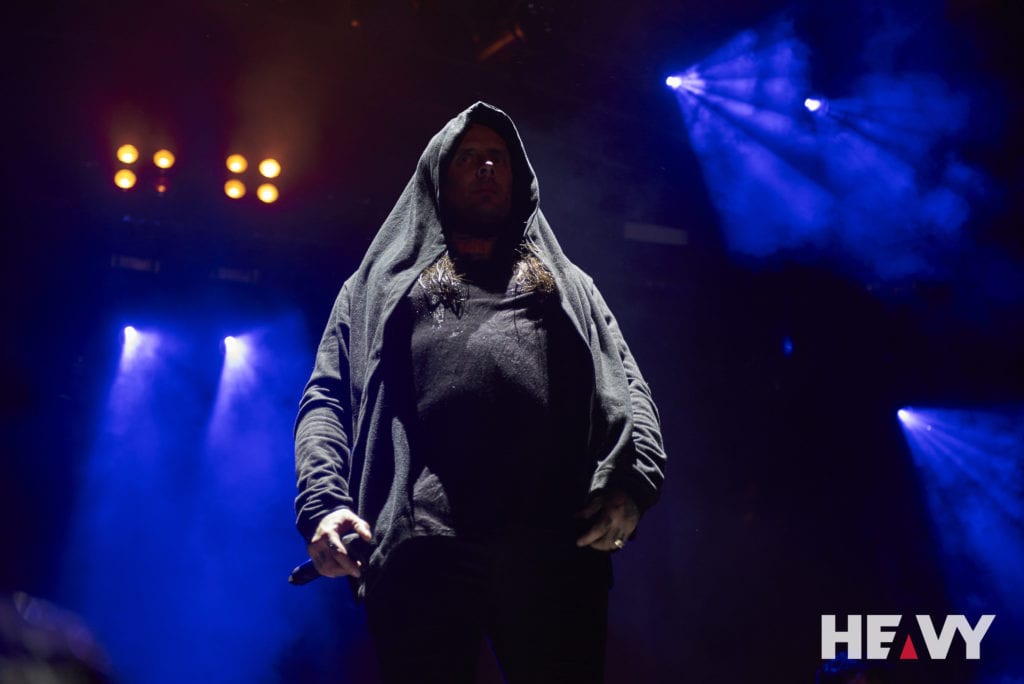 Australia’s incendiary extreme musical act, THY ART IS MURDER, announced the return of vocalist C.J. McMahon at Unify ’17 on the weekend where he walked on stage to fans delight and surprise. To cement McMahon’s return to his rightful throne, the band has released a brand-new song entitled

To cement McMahon’s return to his rightful throne, the band has released a brand-new song entitled “No Absolution”.

Check out the song here:

“A little over a year ago, we were left in a pickle when CJ had finally reached his breaking point – the physical, emotional and mental stresses of touring, and the lifestyle had taken its toll on him. After the dust had settled we had time to speak amongst ourselves, and with him, and we were all able to get on the same page.

“He was able to take time off from the road and work consistently, tick off some life goals like getting married, and enjoy the routine and familiarity of life at home with his friends and family.

“Conversely the rest of us kept going, touring relentlessly, playing bigger tours to more people than ever before, going to new countries for the very first time, and had a blast taking a few great vocalists and mates out for the ride with us while we weathered the storm and figured things out. Special thanks must go out to Monte Barnard, Nicholas Arthur, Lochlan Watt, and every other vocalist who took the time to apply in our discrete vocalist auditions.

“After a few months, away from the chaotic life on the road C.J. reached out to us and we started maintaining more regular communication. He mentioned how he had started cleaning up, was focused on working hard and saving for his wedding and enjoying time at home, but he also mentioned he missed the shows, the friends, and us – his band.

“After months of working things out, gaining his voice back, and mending wounded friendships, we are overwhelmed with excitement to announce that we have completed writing for a new record to be released later this year, featuring the one and only Christopher John McMahon. Welcome back C.J.!”

In regards to the song “No Absolution”, Marsh states:

“‘No Absolution’ is a rich tapestry, intertwined in faith, scripture and doctrine, and a story about the process that we have endured throughout the last year. We recorded this during the session for Holy War but quite simply ran out of time to finish writing lyrics and recording vocals for it to make the record. This song now stands alone, without a record or release – a gift from us to you, thank you for your continued support, we can’t wait to show you what we’re making for 2017.”

McMahon recently offered a brief statement, which didn’t mince words around the reasons for his departure:

“I was a drug addict, I was a broke musician, and I had some fucking issues. I got married, I did some fucking soul searching, and now I’m back to take over the world with my fucking brothers.”

“C.J. is back where he belongs, I am so fucking happy for him and my boys right now. This was truly incredible to witness. Power and then some.”

THY ART IS MURDER latest album, Holy War, landed at #82 on the Billboard Top 200 in its first week of sales. This marks the first time THY ART IS MURDER has made the coveted chart. The band saw similar success in their homeland where they reached #7 on the Aria Charts – the highest position ever for an Australian extreme metal act.

Holy War was produced and mixed by Will Putney (SUICIDE SILENCE, EXHUMED, THE ACACIA STRAIN), and is the band’s second release for Nuclear Blast Entertainment. The controversial album cover and packaging photos were shot by the band’s long-time photographer and friend, Thomas Savage.

Purchase and stream “No Absolution”

Watch HEAVY’s Interview With Thy Art Is Murder at UNIFY